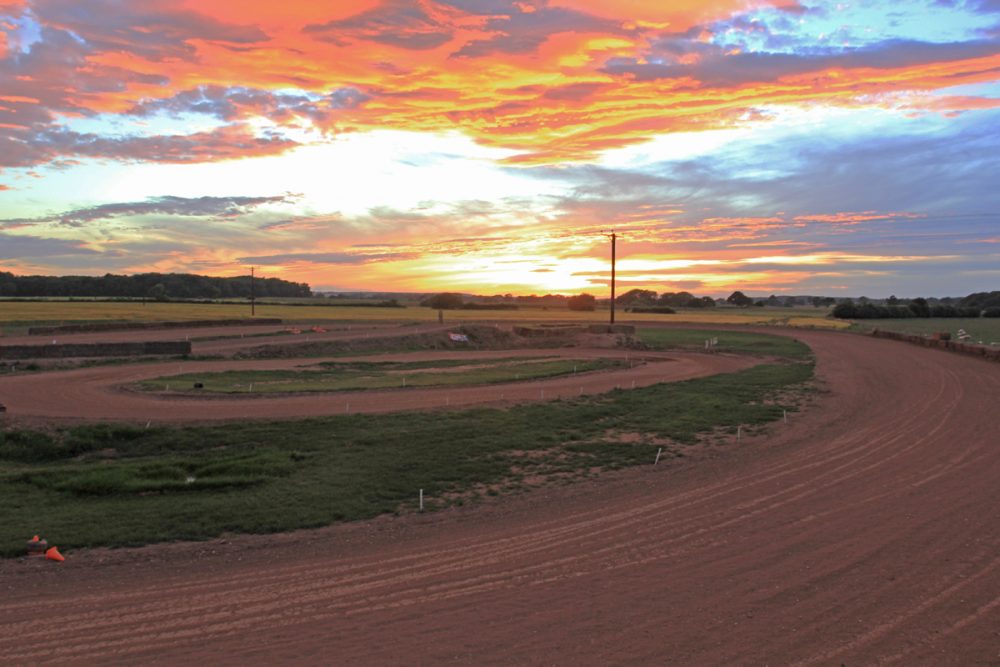 In the rural environs of darkest Lincolnshire, an unassuming tractor trawls it’s crop sprayer around a dirt laden track,  it’s driver content, focused and excited for the prospects that lay ahead for this patch of land.  The driver is a young man by the name of George Pickering and that dirt track is the latest sign that Flat Track Racing is on the cusp of something very big in the UK.  That piece of Lincolnshire farming real estate is now the burgeoning Greenfield Dirt Track circuit, part of what, due to increased media interest, fashionable followers and hard work by those within it, is the fastest growing Off Road Motorcycle sport in Great Britain.

The sport has been a steady grower in the UK until recently, with a small fan and rider base with the twinkle of “On any Sunday” in their eyes.
The times as they say are changing, and with young, ambitious and talented racers like George with the wherewithal to make things happen being a big part of the scene, the certainty is that its only going to get bigger.

Dirt Hub caught up with George to find out more on him,  his track and the Dirt Track Scene in the UK.

Hi George, can you tell us about your racing background and history?

I started racing at Mablethorpe Sand Racing when I was 14 years old, on a Ktm Sx125. I had two seasons in the junior class, winning the championship in the second year. I’ve continued to race there and I have managed to win all the motocross classes. As Mablethorpe Sandracing is run over the winter months it’s great for keeping sharp in the dirt track off season. Last dirt track season I finished 3rd in the national DTRA Flat Track championship. This got me an invite to race at Marc Marquez’s Superprestigio event at the Olympic stadium in Barcelona. It was a great experience.

It gives great close racing which is exciting. The sport is quickly growing within Europe and the UK Championship the DTRA (Dirt Track Riders Association) is playing a big part in that. The DTRA are running the biggest Dirt Track championship outside of the USA and it’s great to be a part of it.

How did you get the idea of creating your

I live on a farm so I’ve always played about building my own tracks.

I made my own dirt track oval in 2013 and had it for two years. It wasn’t a great success because we were still learning about soil type and how to grade it correctly. In 2015 I decided to make a slightly bigger oval on a different piece of land. We also started to learn how to grade the track better and made some of our own implements to maintain it with. This went well so I decided to have some Practice days. These also went well so I decided to expand it again for 2016!

Was there any theory or inspiration behind the track design, size and shape?

Kind of, I measured the length and the width of 12 of the British speedway tracks on google earth and took an average from them and used this measurement as a rough guide for the oval. We then dug the centre out and put all the dirt on the track to build it up. This allows the track to drain naturally to the centre and into the drains we have added. This has also made the track slightly cambered which is good to ride. There aren’t any TT Dirt Tracks in the UK, so we put a jump and a right handed turn in the track, which I am currently still planning to extend. We also put a smaller oval in the centre for kids to start on, which is also great for minibike racing. I did a lot of soil sample tests as well, and also took dirt for some of the better tracks I have ridden on in America and Spain etc to be tested to learn more about what works best.

Last year you hosted a round of the DTRA are you doing that again in 2017?

Yes, this year we’re going to be hosting two rounds. Rounds three and four on the 10-11th of June. This is exciting but we’re expecting around 150 people to enter each day so it’s going to be tough to keep the track as good as we want it to be.

What other events will you be running at the track?

We’re hoping to run a few Practice days for Dirt Track riders and people who fancy giving it ago. We always have bikes available to hire out if anyone wants to try the sport out. We’re holding training school with US Pro Flat Track racer Johnny Lewis in May. We’re also going to be running a Woman’s only training weekend with the DTRA and VC London. We often run Practice and training days/evening for kids though. Kids are the future of the sport so getting them involved is important for us. We have had great support from local kids wanting to ride and expect that to grow even more this year.

As well as the conventional Oval track you also have a TT Variation, can you explain what TT is and how it works?

What are the future plans for the venue?

We’ll always keep tweeking the track as we learn more about it, as well as upgrading and building more machinery to grade it with. We’re also going to open a track side shop in collaboration with a  local motorcycle shop- Evolve Motorcycles from Tattershall.

How would someone get involved in Dirt Track in the UK?

It’s easy, everyone involved with the DTRA are very helpful. You can check out their website www.dirttrackridersassocision.co.uk for more information on how to join up. Peter Boast runs his Champions Flat Track schools on Honda CRF minibikes, which is great for people wanting to try the sport out.

What alterations need to be made to a standard MX bike for it to be a Dirt Tracker? The basics are to run 19″ wheels, lower your suspension and fit a lanyard. That’ll get you started, and then modifications to set the bike up how you want it can be endless, the same as any motorcycle racing.

Finally tell us how people can get to ride at your track and how to contact you?

We use the MCF to insure all of our events so having a MCF licence is helpful, but we can issue day licences. The best way to contact us is via social media. We have a Facebook and Instagram page.

Like I’ve also said, we have hire bikes for people who don’t have correctly set up bikes. Supermoto bikes work well on the dirt with wet tyres and we’re keen to encourage some of those guys to come and give Dirt Track a go too.