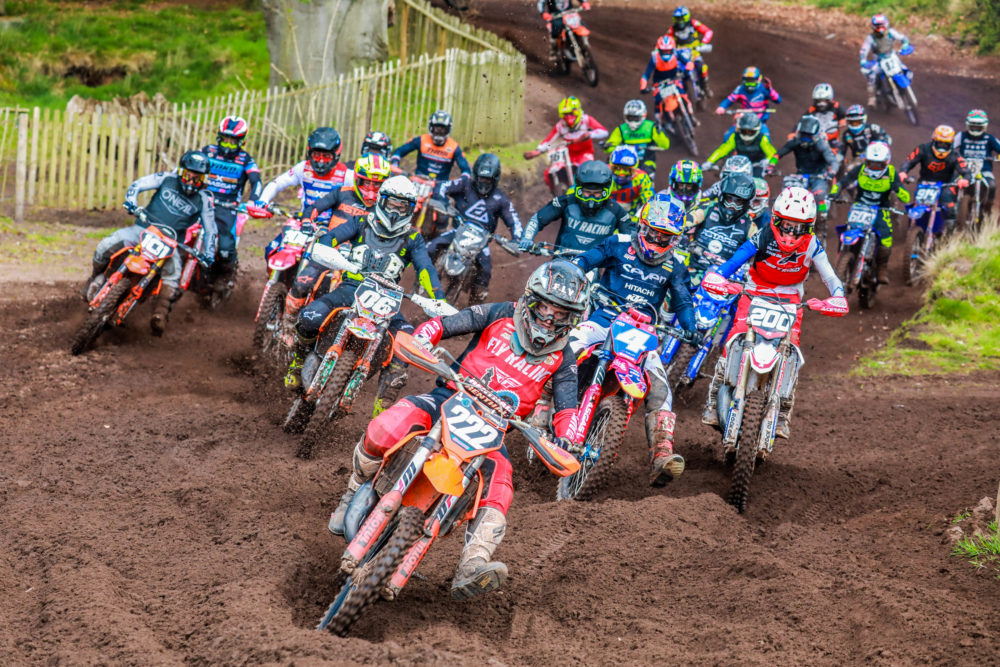 With a year off due to the pandemic, it was finally time to kick off a race season as the Acerbis Amateur Nationals rolled into the infamous Hawkstone Park for the first championship round since 2019, and with full classes and a perfectly prepped circuit, all was set for a weekend full of fantastic racing.

The Manchester Xtreme Junior Open class was first out to hit the track and Alfie Calvert proved he’d used the time off to prepare as he dominated the full weekend taking home a maximum point haul and standing on the top step on Sunday afternoon. Graham Clark was best of the rest as he took a brace of runner up spots on Saturday backed up with an eleventh and third on Sunday giving him second overall while Jake Bashford, Richard Evans and Jack Gotts rounded out the top five. 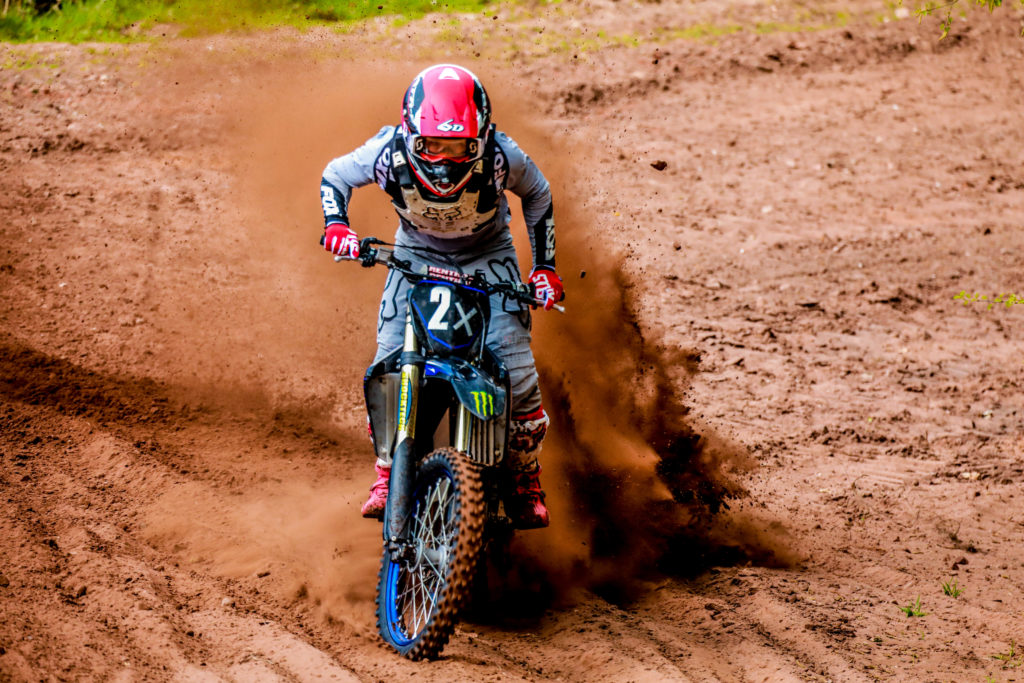 It was the Moto Connection 125 class that was next up and it was all about consistency as a mixed bag of results meant the 2-2-3-2-5 results of Matt Ridgway were enough for him to claim the overall victory by a solid six points from Liam Gale who will be disappointed with his first race eighth possibly costing him an overall. Stu Owen took his Yamaha to a pair of race wins in races three and four helping boost him to the lower step of the rostrum. Ash Harland, not at his favourite track on the calendar had a solid start to the season with fourth overall not too far out in the points. 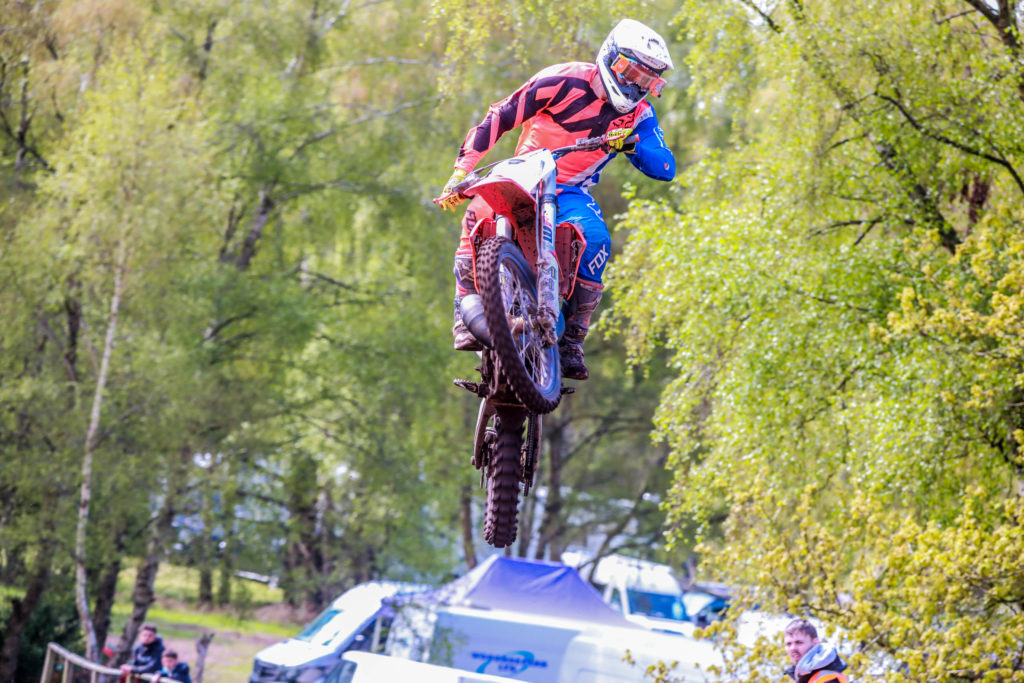 The California Dreams MX Holidays 250 Open 2 Stroke class provided us with some excellent racing as per usual, and it was Cumbrian James Dent that took the overall honours with a 1-2-2-3-3 scorecard after some intense battles with reigning 2 Stroke champion Adam Harris. It was all tied going into the final moto between the two but a last race sixth for Harris was the deciding factor to who would stand on the top of the podium while Oli Benton scored two moto wins in races four and five to boost himself up into the third position overall just four points adrift of Harris. Drew Roe and Alex Buchanan rounded out the top five after mixing it up with the front three. 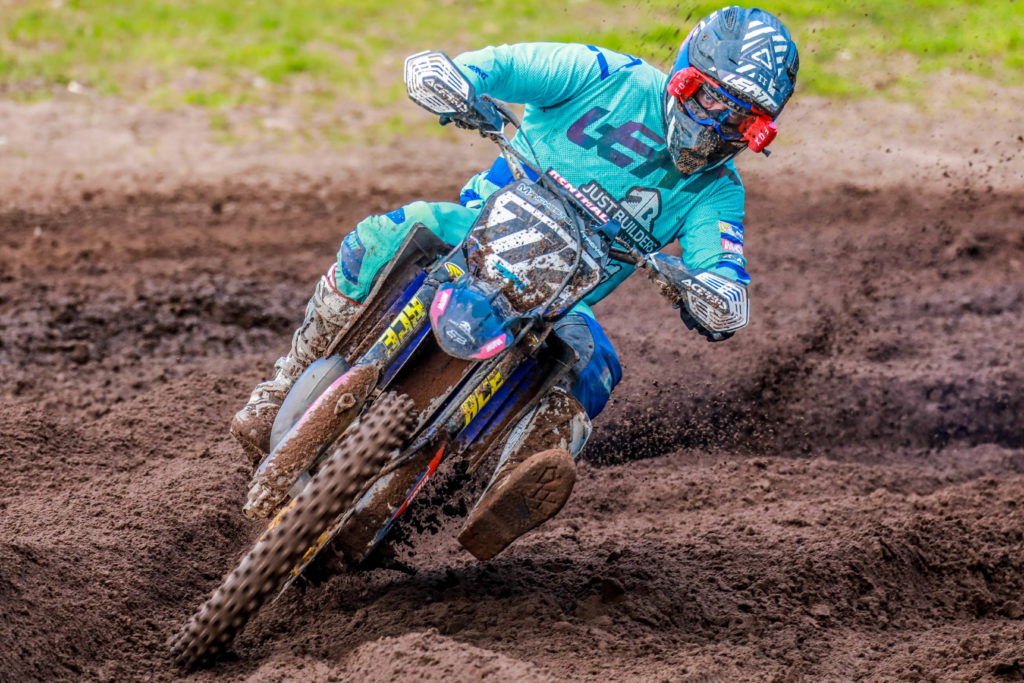 In the Roberts Plant Engineering Vets Over  50 category, Brian Wheeler took a hat trick of wins on day one but a no show on day two dropped him down the order overall. Dave Dunn made the most of Wheeler’s absence and took a pair of wins on Sunday and claimed the series lead going into Haverigg in June. Former champ Chris Brown rode consistently all weekend and managed to salvage solid points for runner up on the weekend and Andy Watkins is well in the fight too just a couple of points behind Brown in third. 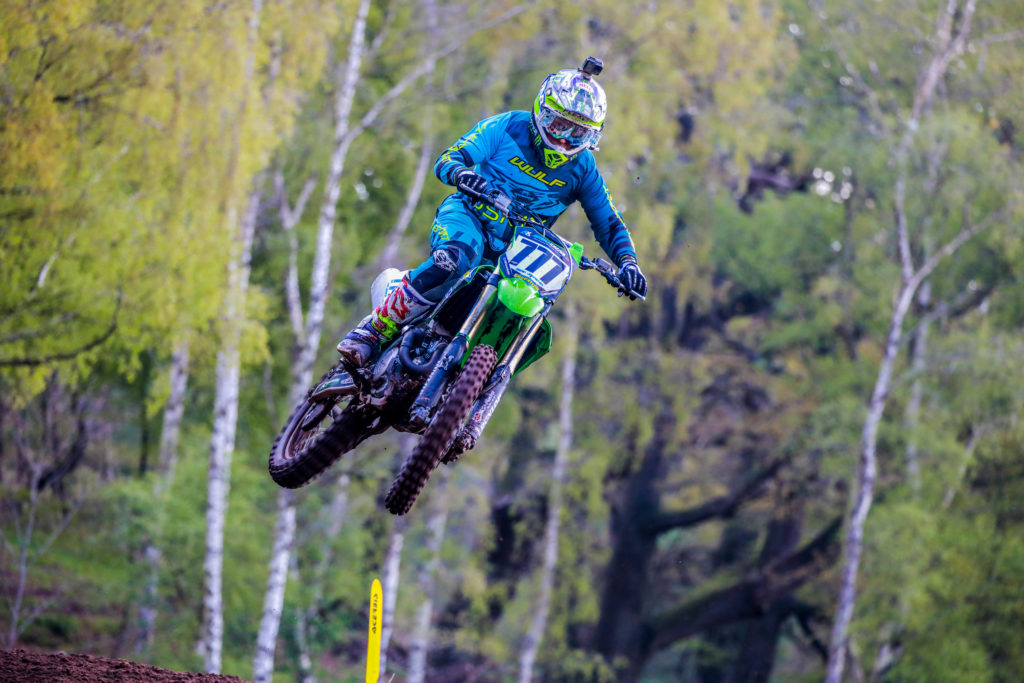 Ryan Voase was the man in control of the LS2 helmets Vets Over 40 class looking very Brian Wheeler esk and making things look easier than things really were as he cruised to five wins from five starts onboard his Kawasaki. Danny Tollet was in fine form and led laps over the weekend but had to settle for second place this time around as Adam Wilkinson stood on the lower step of the podium. Danny Blakeley and Barry Gray rounded out the top five. 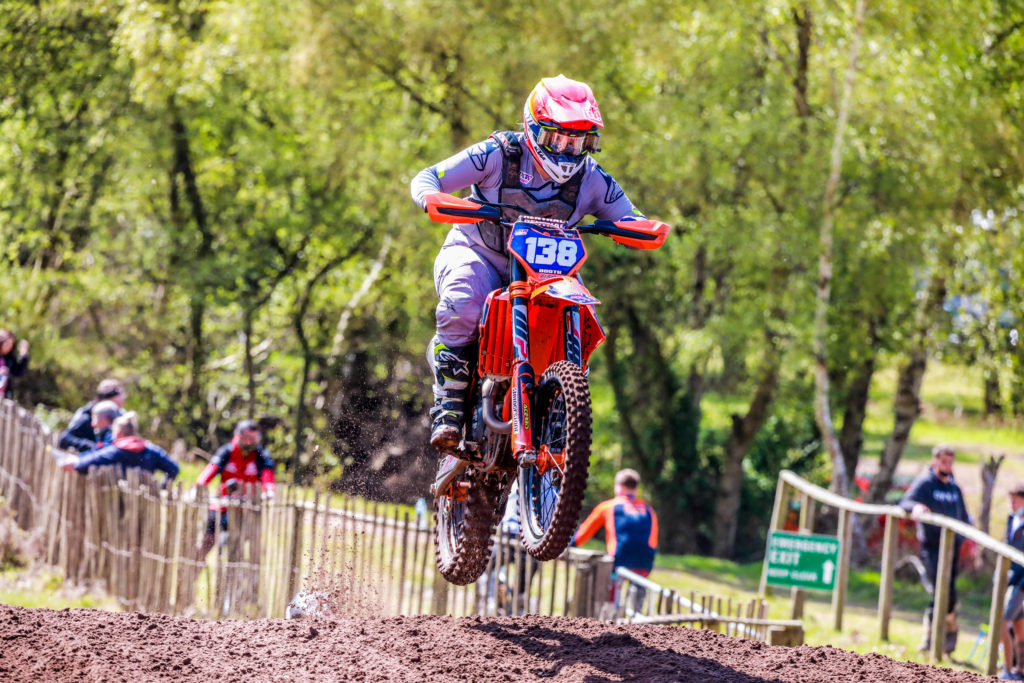 In the Pro Green Ladies category it was Kathryn Booth that took the early series lead with a second and four wins; the KTM rider dominated most of the weekend apart from the first moto where she had a few crashes having to come through the pack meaning Nadiya Jones took the victory on her 125. Jones had three second places alongside a well-earned race four fourth after an early spill meaning she had to come through the pack from behind. Charlotte Hall took her GasGas to third on the podium fending off a pair of Hondas in the form of Taylor Scott and Catherine King. 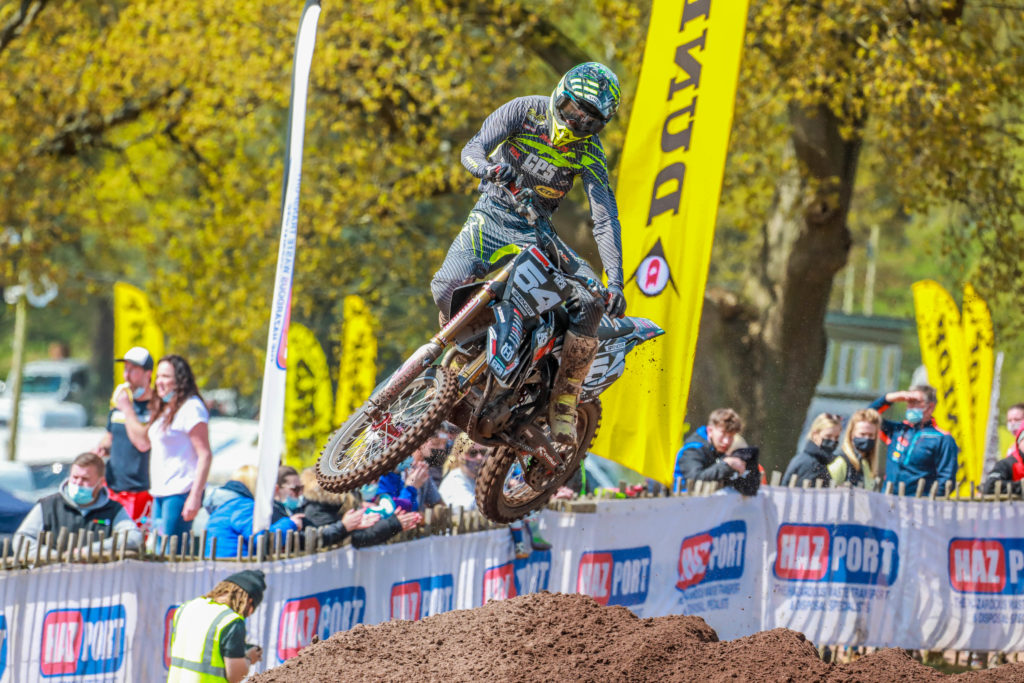 The Craig Motorcycles MX2 class produced great racing all weekend and it was Mitchell Meadows who came out on top with a second and a hat trick of race wins meaning a solid moto in the final race gave him the overall honours and championship lead. Josh Canton took the final race win but fell five points short of the overall so stood on the second step come close of play on Sunday. Marshall Smith is going to be in the hunt for the championship too taking the lower step of the rostrum ahead of race one winner and former double 125 champ Dylan Spencer. Cory McShane could have been right in the mix as well but a final moto crash ruled him out of the overall. 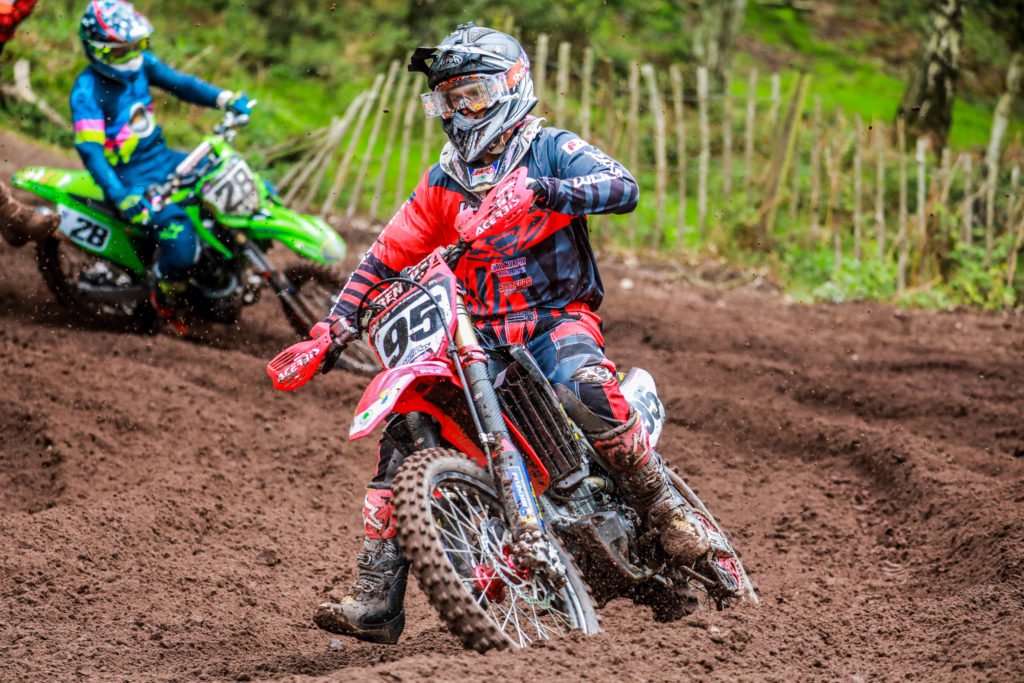 In the hotly contested Paradise MX Holidays MX1 class James Hutchinson made his way down from the North East and went on to claim three wins and two fifth places after a start crash in moto three gave him a lot of work to do. Scott Hamilton made the trip once again from Ireland and took a race win on Sunday to boost him up to second overall while Ed Briscoe claimed the other remaining win which gave him third on the box and a solid points haul to start the year. Andy Wilson is going to be in the mix all year once again starting off with a fourth overall. 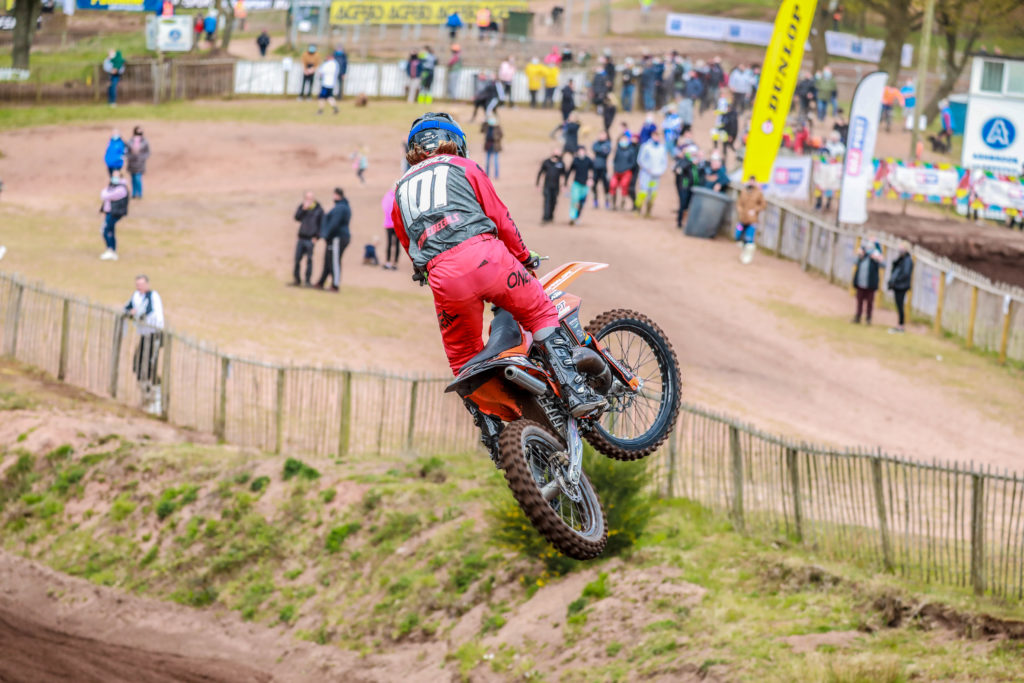 A massive well done and a pat on the back has to go out to Darren, Chloe, Heather and the whole C.T Events crew for putting on an amazing event during these tough times and getting us all racing once again. The series now heads to Haverigg on the Cumbrian shores for round 2 of the 2021 championship. 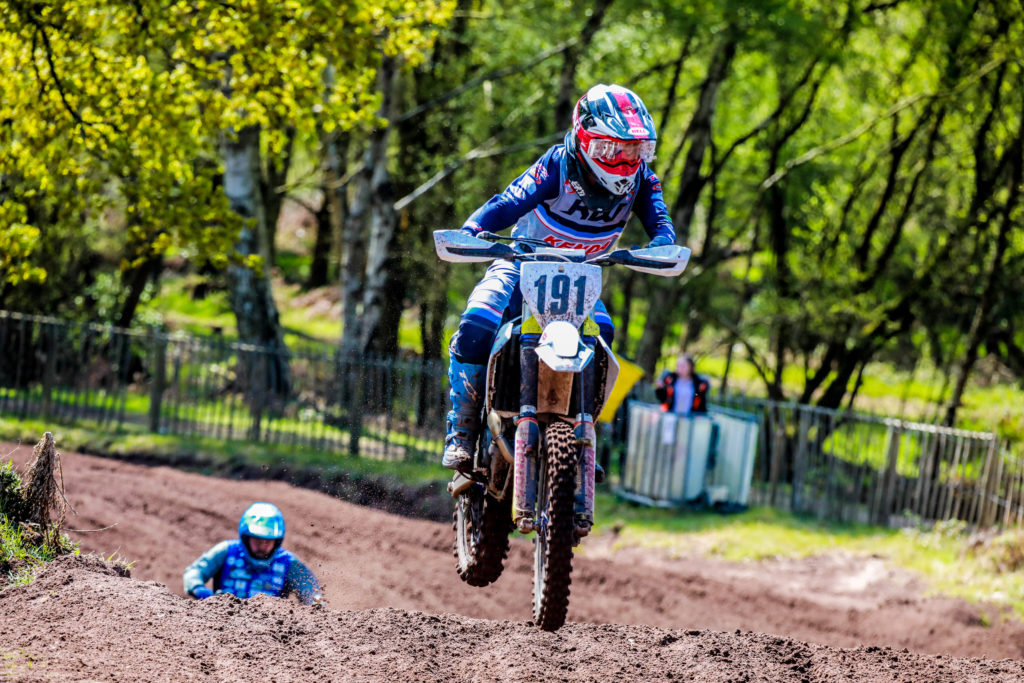 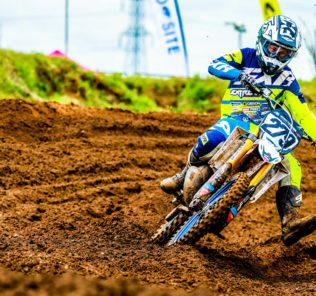 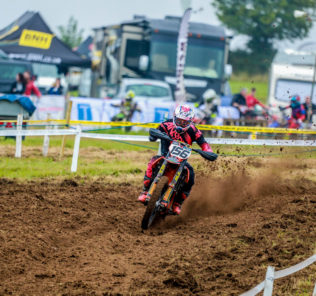 One up for Wells! Acerbis Amateur Nationals – Race Report and Results
Read More

Skinner & Butt put on a show at Dartmouth Classic Scramble – Race ...
Next