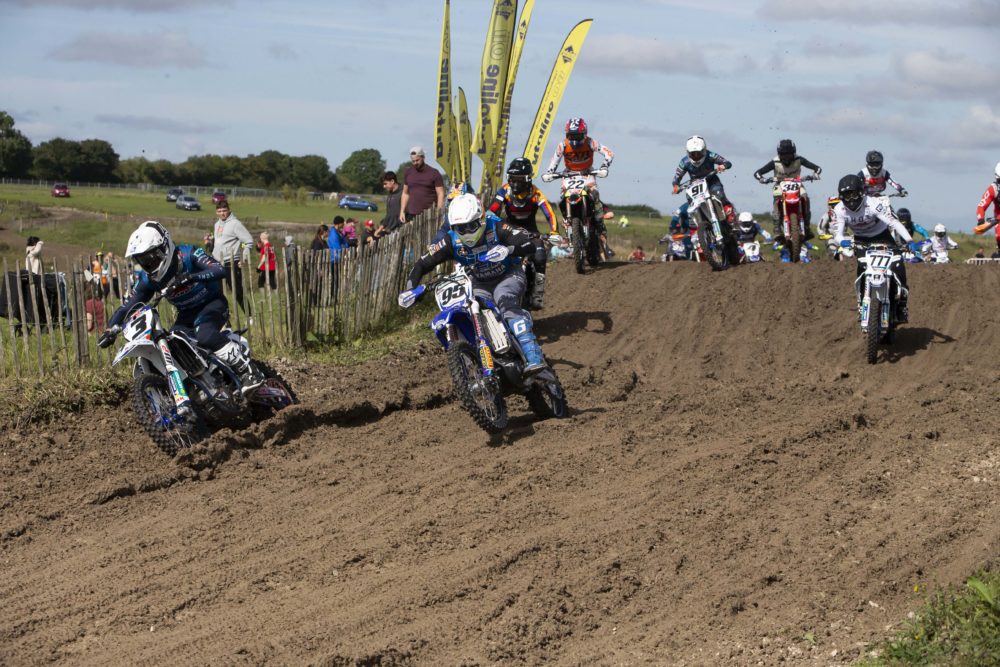 Dan Thornhill on Cab Screens Crescent Yamaha proved the consistency win’s championships as last weekend he won the Bridgestone British Masters for 2021 without winning a race all year.

As Thornhill did his thing in the Pro MX1’s, John Adamson riding a Gabriel KTM clinched the Pro MX2 championship with a race in hand.
But the two Pro races at this fifth and final round of the championship were set alight by the wildcard riders PAR Homes Husqvarna pairing Evgeny Bobryshev and Josh Gilbert as the pair shared the Pro class win’s and second places were in a class of their own.

All the championship classes were hard-fought, with some going to the final lap of the year’s last race. Luckily for the hard-working series organisers, the heavy forecast rain didn’t arrive. Still, some showers overnight made for a somewhat soggy track when the Pro riders lined up for qualifying first thing Sunday, but as the track dried out, it became a bit one liney. 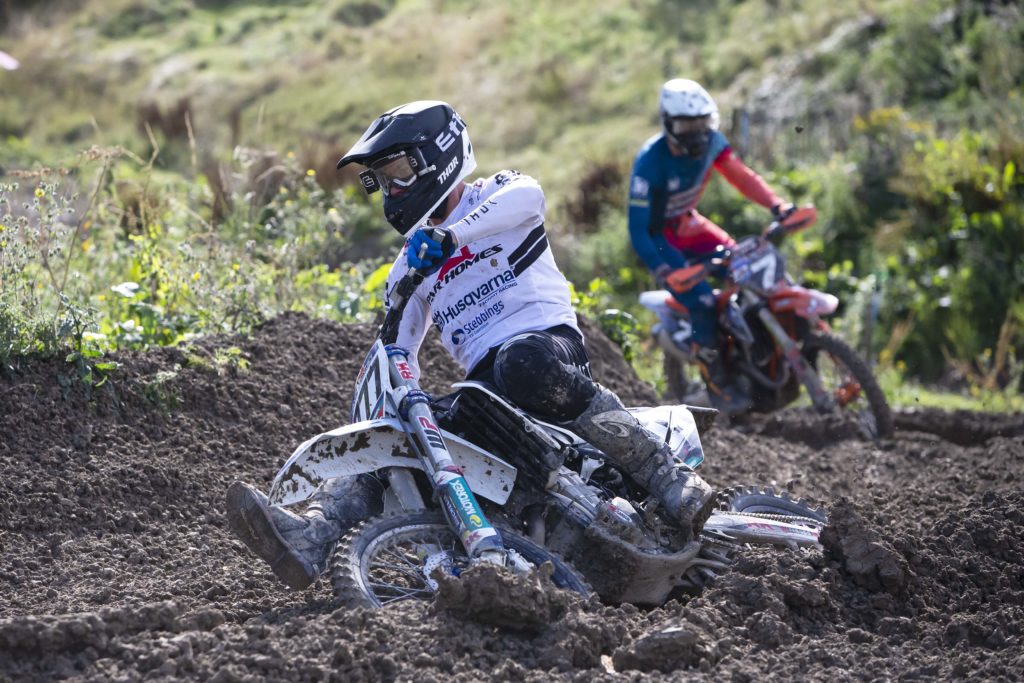 As the gate dropped for the first combined Pro MX1 and MX2 race Gilbert got the holeshot from championship contender Thornhill with Bobryshev in third. But before the end of the lap, Bobryshev was into second, and the two fast PAR Homes riders started to pull further and further away from the rest of the pack, who were disputing the championship win.

For the rest of the eleven-lap race, Bobryshev did all he could to get past his teammate and snatch the win. But, with the drying track and the number of races before the Pro’s went out, passing was a problem.

Josh Spinks found away passed Thornhill for third on lap two as the top four finished in that order.

Adamson was riding with a damaged knee and is waiting for surgery and was planning to do just enough to clinch the Pro MX2 championship and gated fifth, the first MX2 rider, and spent all race in the position. This result was more than enough to make him this year’s champion, with a race spare. However, he didn’t participate in the day’s second Pro race to save his knee from further damage.
Thornhill’s main championship rival, Brad Todd (Moto-cycle Yamaha), didn’t get the start he wanted and rounded the first turn in tenth place. He made it up to sixth before a small off dropped him back to eighth at the end of the race, making winning the championship an uphill struggle. 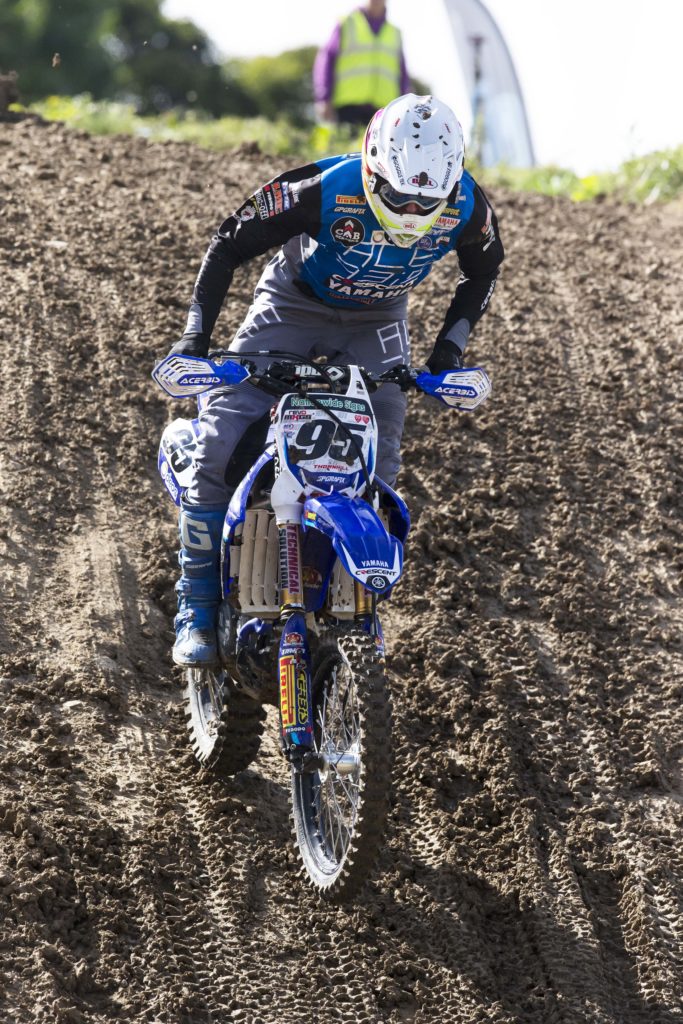 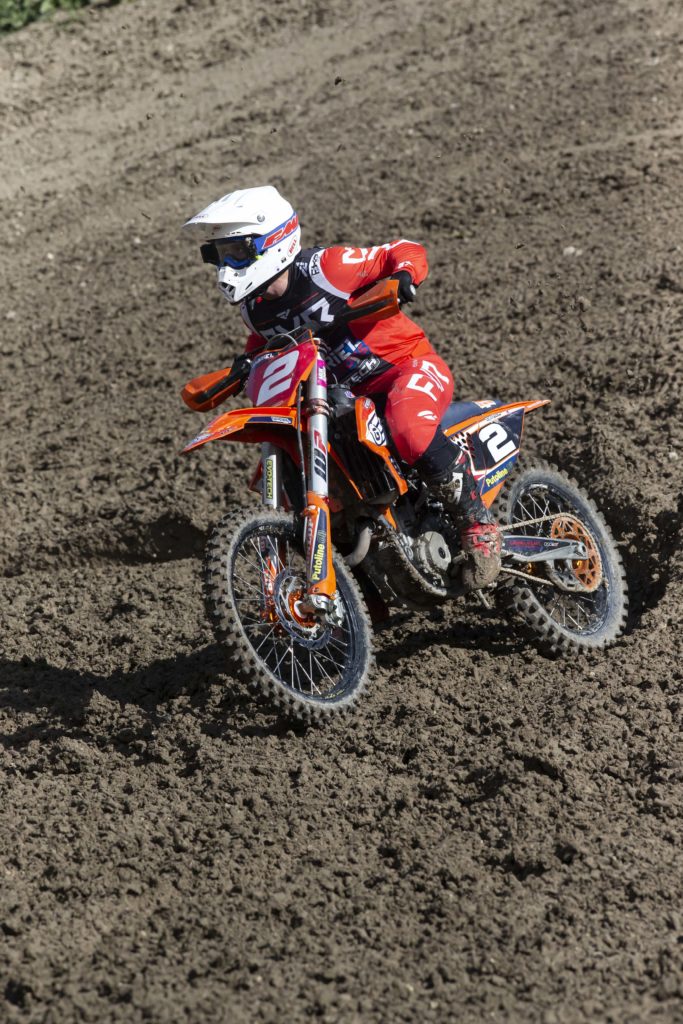 Sam Nunn (RHR Yamaha) started the race in seventh, but second MX2 rider. He took full advantage of Todd’s crash on lap eight and passed Tom Grimshaw (Chambers Husqvarna) on the last lap for sixth on the track but the second MX2.

Before the start of the second and last Pro race of the year, all Thornhill needed to do was finish seventh or higher to clinch the Pro MX1 championship, but as the gate fell, Thornhill stalled his Yamaha and put him to the back of the field with a mountain to climb.

Bobryshev got the holeshot from Gilbert, Spinks and Todd, and that was the order they finished. Mind you, Bobryshev and Gilbert finished over a minute and a quarter in front of Spinks and Todd.

Thornhill was eighth by the end of the first lap and finished fifth and was chased over the finish line by Grimshaw. But he had done enough for the championship win.

Nunn was the first of the MX2’s at the start in sixth, but a slip off on the last lap allowed Callum Mitchell, from fourteenth place to eighth on the track, but first MX2 home. 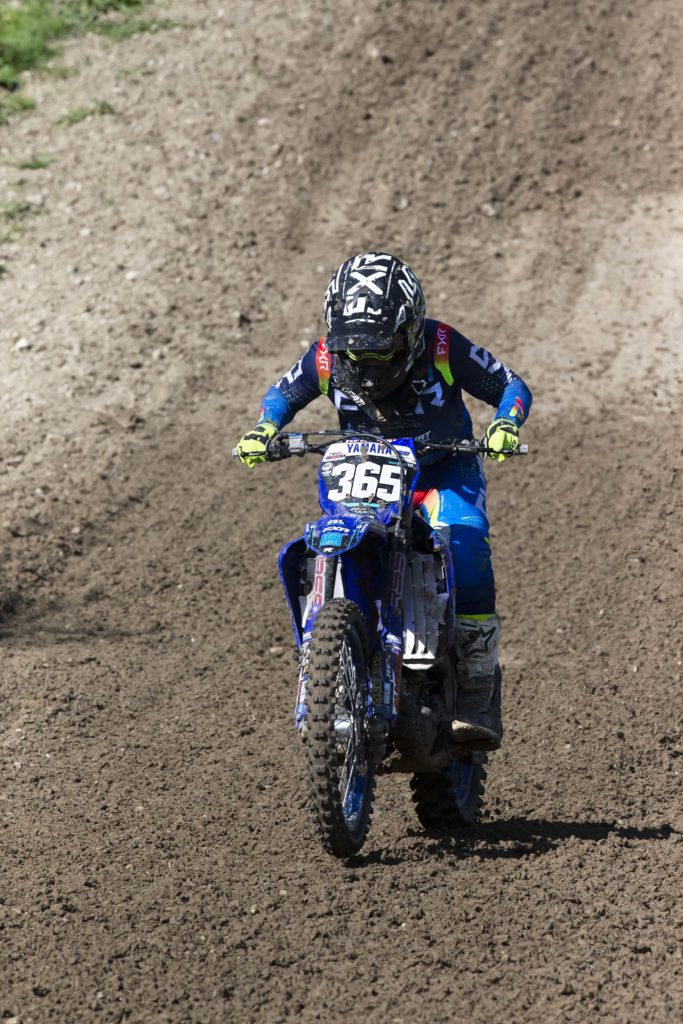 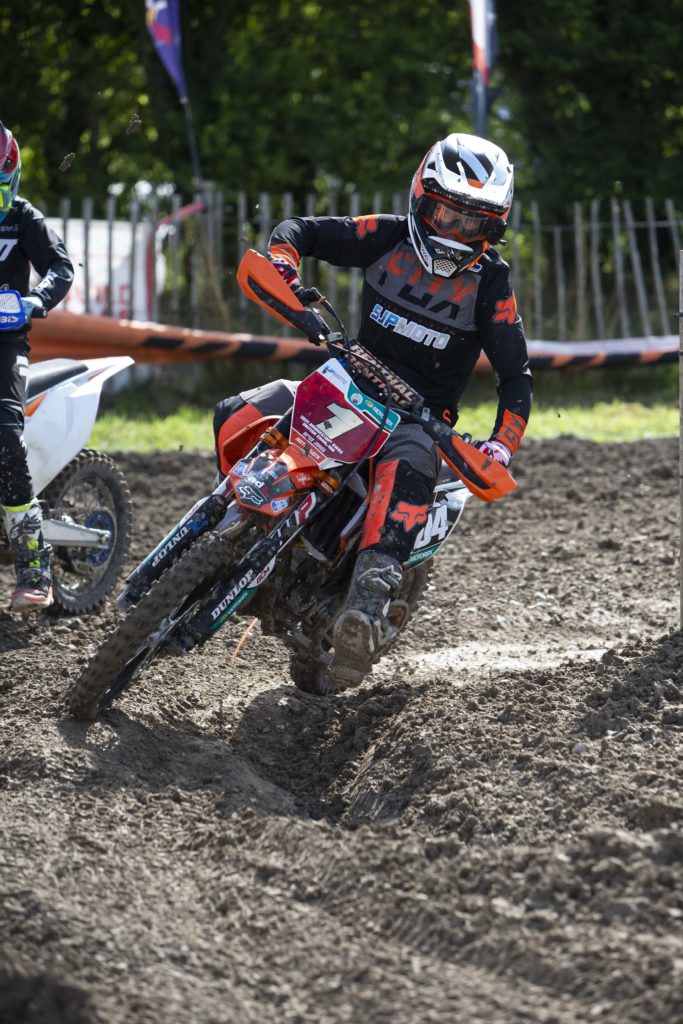 Overall, in the MX1’s, it was Bobryshev from Gilbert, Spinks and Thornhill, but in the MX2’s, it was Nunn from Yates, Collings and Kessel.
“It’s been a great year, and it’s nice to get this championship for myself and the team,” said new Pro MX2 champion John Adamson, “They have put a lot of hard work into the team, and it’s nice to give something back. This year I have improved by the team giving me a great bike and the support that goes with it, and on my training side, I have had Dave Dougan helping me. He has really stepped it up for me, both physically and mentally.”New Pro MX1 champion Thornhill said, “It’s been a rough couple of years leading up to this. This year is a step in the right direction for me. Last year was OK, but Covid made it an even shorter year. I have not always been the fastest rider out there, but I have always been towards the front, and this has brought about this result. You always have to be in it to win it, so they say”. 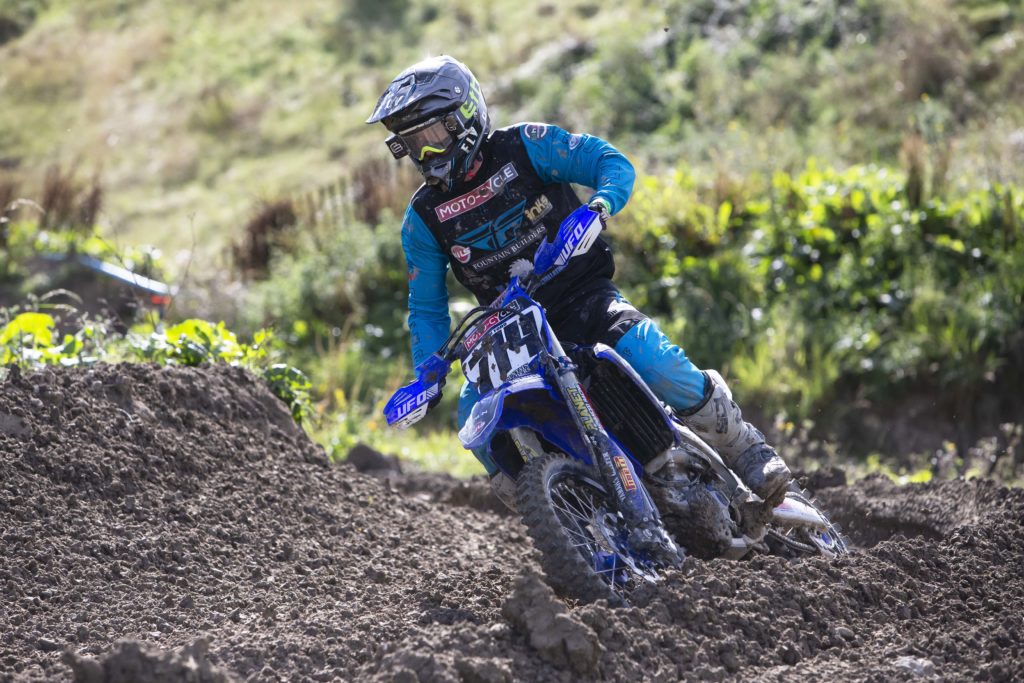 Only four points separated the first two places at the top of the amateur MX1 class. Race two winner George Clarke took the overall from wildcard rider Corey Hockey second as mistakes robbed other riders from podium places. Mark Young had two wins and a second, but a DNF in race two dropped him down to fifth overall. Likewise, a troubled first race spoilt Tyrone Cleaver challenge for the win as he scored a third, second and ended his weekend with a win for fourth overall. 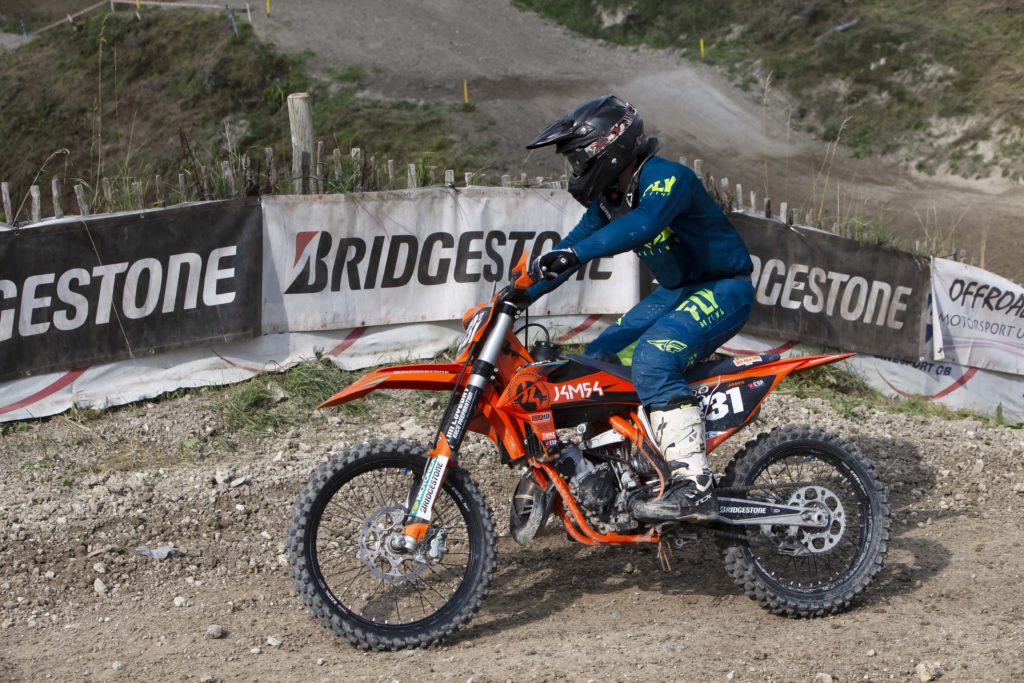 Aaron Patstone finished the weekend in eleventh place overall, but that was enough to make him the 2021 amateur MX1 champion.
The battle for the amateur MX2 was all about the Jones’s. Alfie Jones had three race wins and a second-place for the overall for the last round but, as a result, won the championship, while Rory Jones won the race that Alfie didn’t and chased him over the finish line in two of the other three. But this gave him second in the championship.

Four wins from four starts for wildcard rider Tallon Aspden in the clubman class, but fifth overall over the weekend, Mark Kinsley won the championship.

Luke Dean won all four of the 125cc two-stroke races for a maximum, while second overall, Troy Willerton won the championship by fifteen points from Jordan Bachelor. 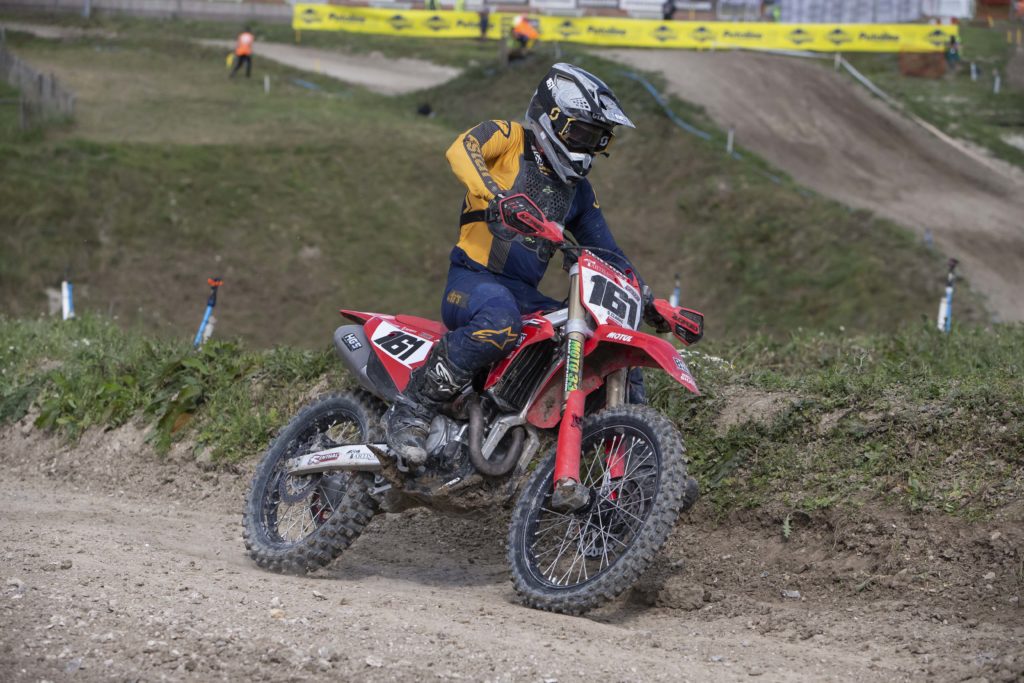 With three wins and a second-place wildcard rider, Bayliss Utting won the MXY2’s from Jack Lindsay and Max Lewis. Ben Clark had a terrible day and finished eleventh overall, but luckily, he had enough points to clinch the 2021 MXY2 championship by a massive hundred and twelve points from Lewis and Kayde Rayns. 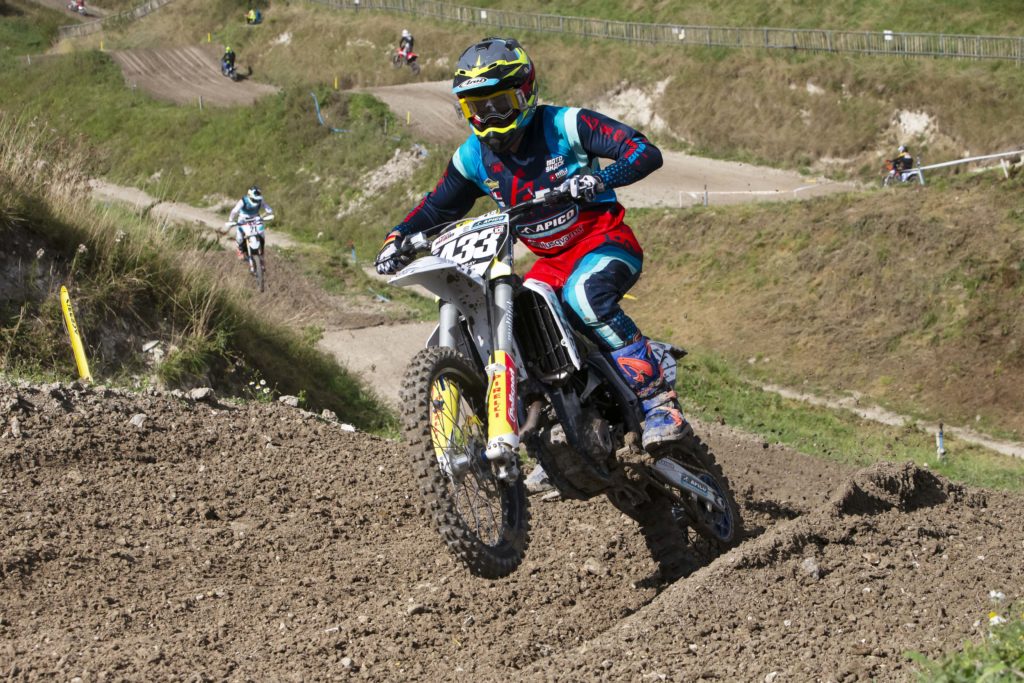 Before the start of the big wheel 85’s, it was tight between Billy Askew and Tyler Hooley for the championship. But Hooley was behind and had to go all out to snatch the win from Askew. Hooley won two of his races and finished second in the other two for the overall. But Askew played it smart and was never out of the top three for second overall, and with it won the championship by fourteen points. 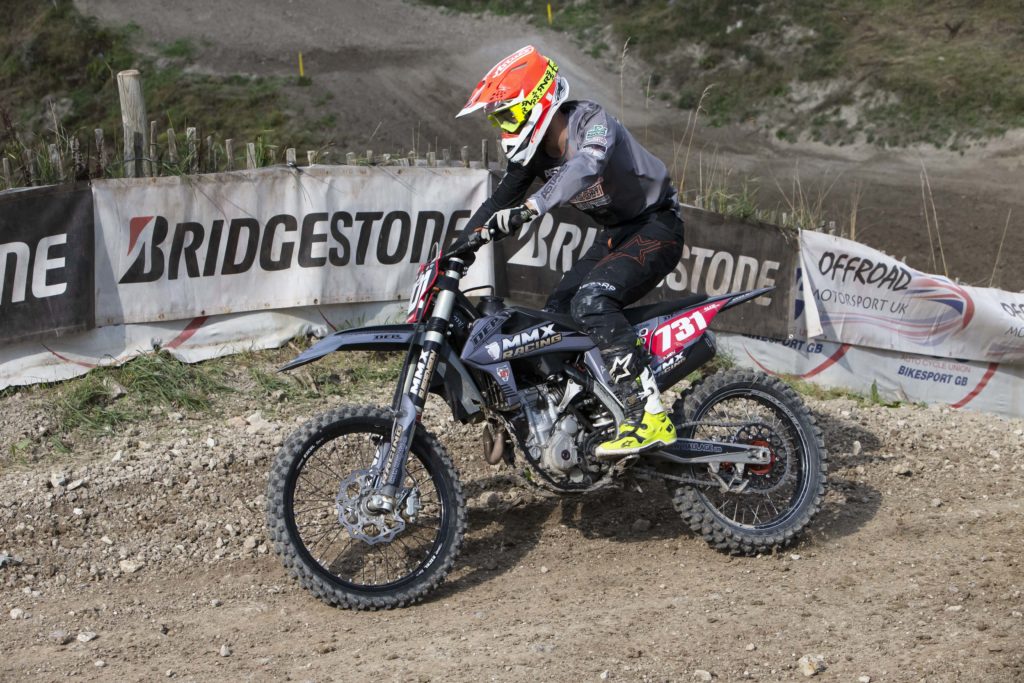 You must feel sorry for Reece Jones. He was on the perfect championship till race three of the last round. He had won every small wheel 85 race up until then but was beaten by Jamie Keith. However, he won the last race making it 19 wins from 20 starts. Jamie Keith was second on the weekend, with Freddie Gardiner third. Drew Stock was second to Jones in the championship, with Chester Hyde third. 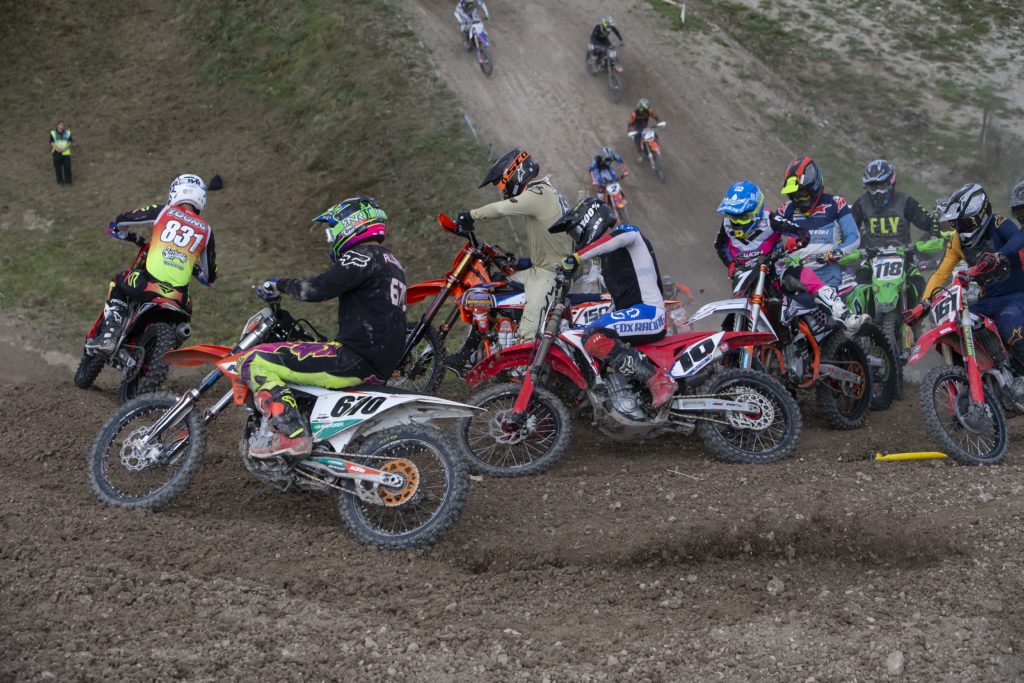 It was tight at the top of the junior 65’s, but then again, it’s been like that all year as Alfie Geddes-Green and Robbie Daly have been exchanging wins and second places at every round. But, in the end, Geddes-Green, with two wins, a second and a fourth, won the weekends overall from race one and three, winner Daly as the pair finished on level points. But in the championship, Daly won by just twenty-three makes from Geddes-Green. Joel Winstanley-Dawson was third at the weekend and third in the championship.

And that’s it for another year. Registration is already open for next year, with some classes already almost full. 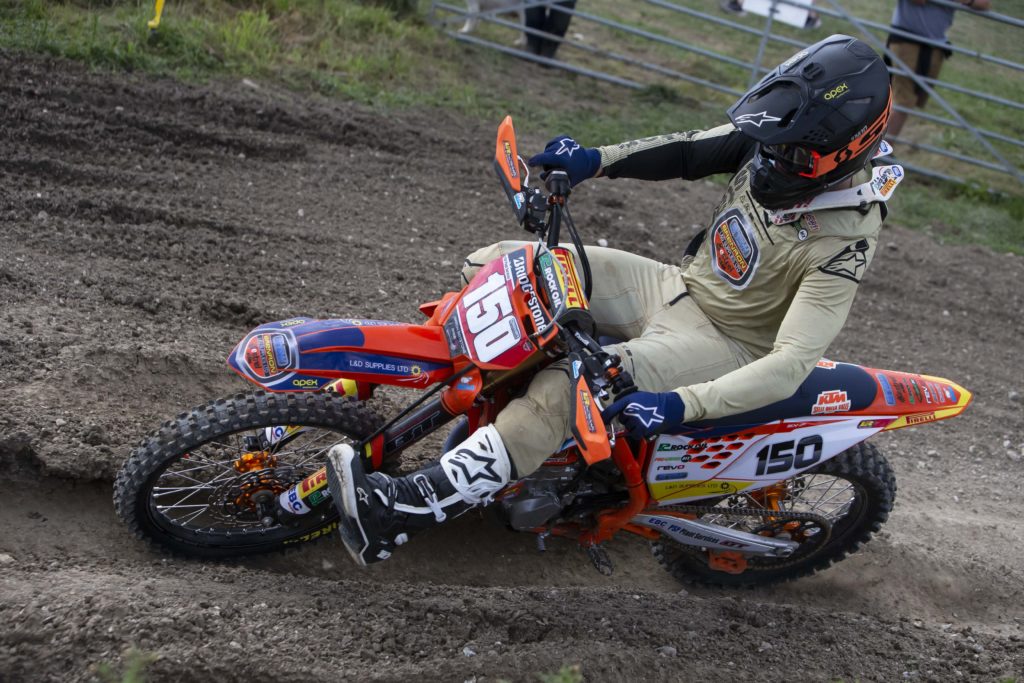 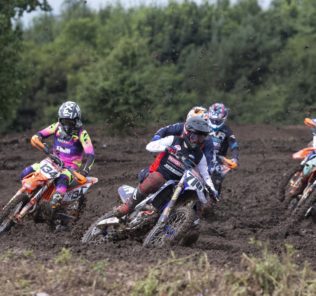 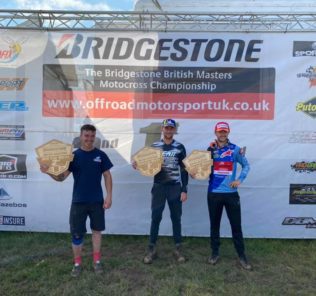 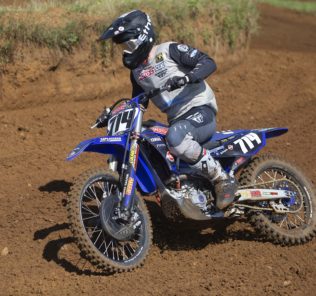 VIDEO: The Fastest One Armed Dirt Bike Rider in the World?