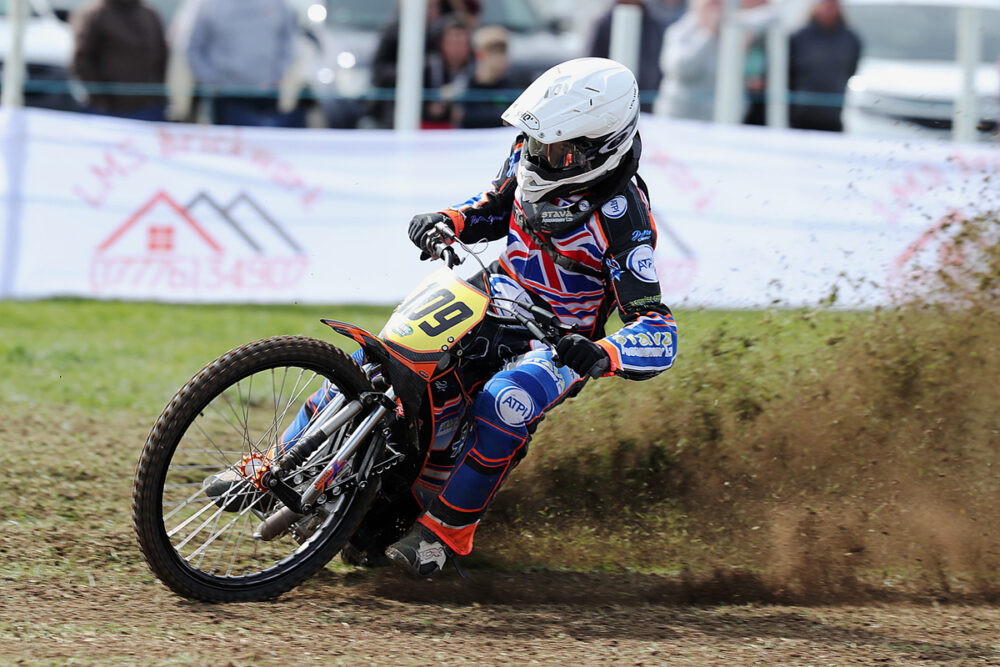 After having been forced to stage the inaugural Bantasia behind closed doors due to Covid restrictions, it was time for episode 2 on Sunday, and what a great event it was to be. Professional presentation, super racing and dramatic moments, it had it all and was played out infront of a large gathering of spectators.

Words and Images by Mike Wood

Setting the tone for the great entertainment on offer, the 1000cc Right-Hand Sidecars opened proceedings with a terrific heat one. In that tussle, Trevor Heath/Sam Heath took victory, resisting the very close attention of multi British Masters Champions Mark Cossar/Gareth Williams throughout four pulsating laps. After his super performance the previous week at Ledbury, Terry Saunters/Liam Brown also started Bantasia 2 in style with a very impressive win. With all of the above crews eventually making the A final along with the fast Neal Owen/Jason Farwell, Paul Whitelam/Richard Webb and Will Offen/Ricky Pay, the scene was certainly set for an absolute classic. Unfortunately though with the on-site medical crew being otherwise engaged and monitoring injured solo riders, the big final was never to happen. So the overall verdict was to be decided on the points scored in the heats but even that failed to create a result as incredibly in this red hot contest, three crews, Cossar, Owen and Saunters had all finished the event on 19 points apiece. Now the next factor was the results obtained when these crews had met during the earlier racing which meant victory was to go to the reigning Bantasia Champion Cossar from Saunters and Owen. 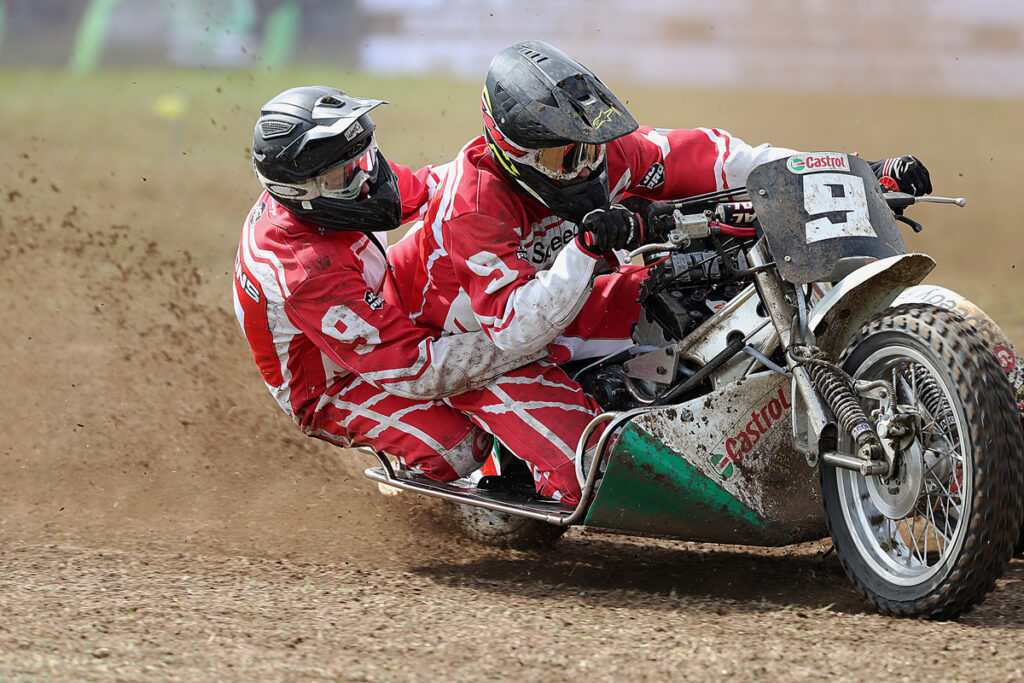 Although the A Final did not happen, the C and B last races were completed and what dramatic affairs they were to produce! Due to injuries and mechanical gremlins, just two crews were able to go to the line in the C bash. Then with Dale Fish/Jordan Fish stalling just yards from the start and being unable to clear their stranded outfit from the circuit before Anthony Sales/Michael Tottman attempted to complete lap one, the clerk of the course was left with no alternative but to red flag the race for safety reasons. Fish was excluded for being the primary cause of the stoppage handing victory to Sales. The surprised winner then had to immediately go again after being promoted to the B final due to an available space but Sales was to crash early on lap one. Unable to go in the rerun, B final victory went to Will Penfold/Bradley Reynolds despite intense pressure and a great late effort from Robbie Simmons/Wayne Rickard. On the last lap, Simmons had dived bravely up the inside of Penfold, only to lock up and almost lose control. Superbly though Simmons somehow maintained forward momentum to still get home in 2nd as Matt Fumarola/Andi Wilson took 3rd. 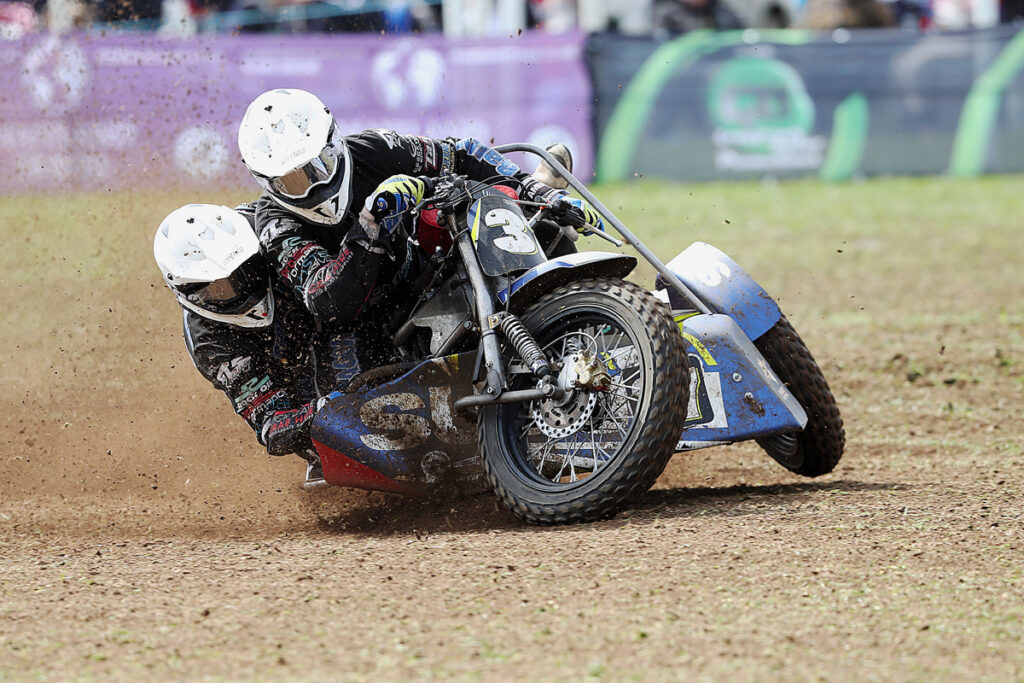 In a star studded Elite Solo class, Dorset lads Chad Wirtzfeld and James Shanes both started with impressive wins. Shanes was then victorious in his second heat along with Zach Wajknecht. Unfortunately the third block of racing was marred by an horrific high speed crash on the back straight as Theo Pijper and Daniel Winterton collided. Although Pijper was eventually able to walk away, Winterton required a trip to hospital with a reported punctured lung, broken ribs and a broken wrist, get well soon Dan! After a very lengthy delay, the meeting eventually restarted and what a high-speed classic it was to produce as Wirtzfeld and Shanes locked horns in a fierce tussle, passing and repassing before Shanes took control. In this set of heat three Elite Solo action, Wajknecht was victorious again to comfortably book his place in the A final. 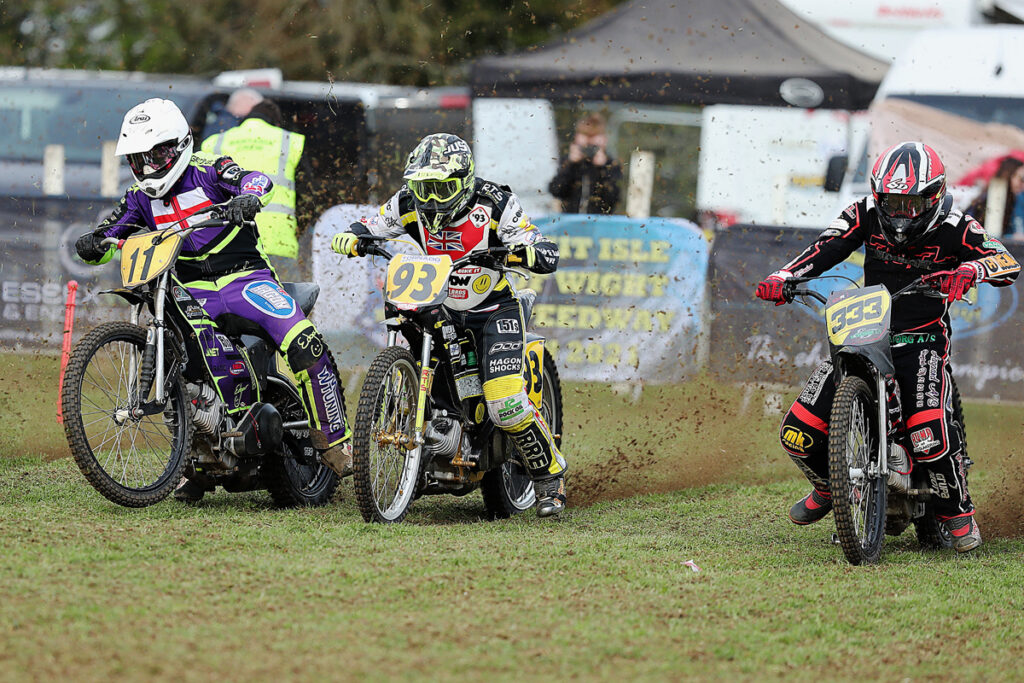 However that much anticipated, high quality final was to quickly come to a shuddering halt as Shanes appeared to clip the back wheel of Wajknecht when entering turn one. Crashing heavily, and being high-sided off his machine in horrifying fashion, James suffered concussion and heavy bruising, get well soon! So, like the 1000cc Sidecars, this class was decided by qualifying scores although Shanes exclusion from the first attempt to run the final dropped him down from potential winner to 8th place. That meant that Bantasia victory went to Zach Wajknecht ahead of Wirtzfeld, Paul Cooper and Jake Mulford. The very entertaining Elite Solo B final was to see Alfie Bowtell take top slot despite the very best efforts and close attention of Arran Butcher. Butcher gave it his all and even attempted an audacious last bend cut back, just failing to snatch the verdict on the run in to the flag. 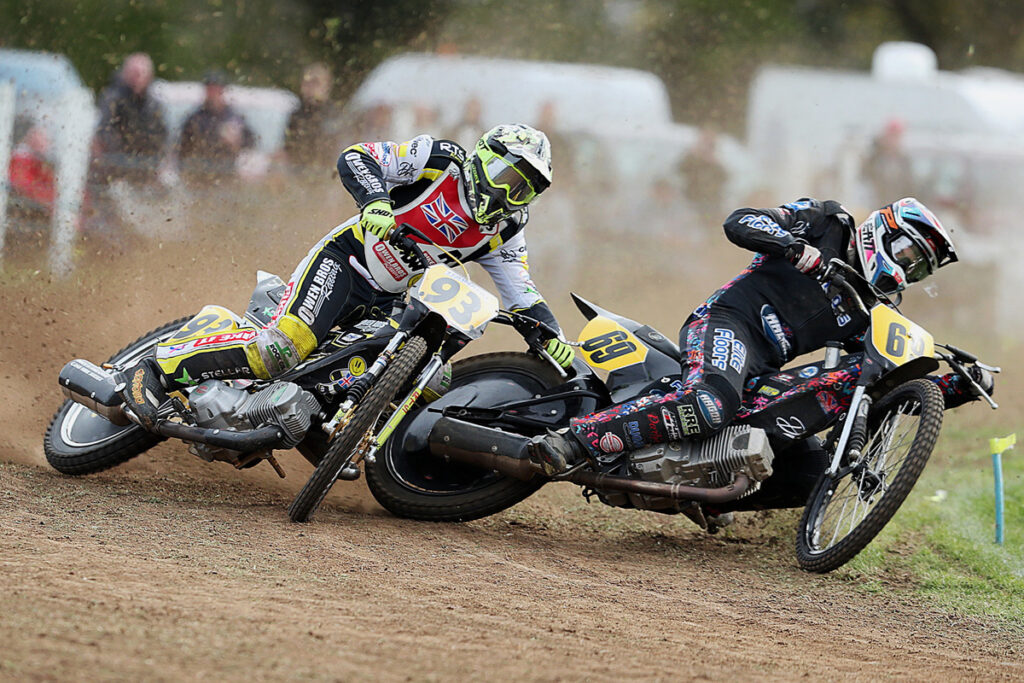 Jason Prynne, Wayne Broadhurst, Graeme Brown and Ryan Ashcroft all recorded heat wins in the Open 500cc Solo contest. After winning his opening race, Prynne then encountered a worrying moment in the second heat with a spluttering engine slowing him down. However he was then first past the chequered flag in the final heat to safely secure his place in the A Final. In that race though ,Broadhurst made the fastest start and looked an almost certain winner, leading all the way before agonisingly slipping off on the final turn. Taking full advantage was a surprised Prynne ahead of Ashcroft and Paul Bowen as the unlucky Broadhurst pushed home for last place. Open Solo B final honours went to Dean Cutler as Luke Tuck got home in 2nd. 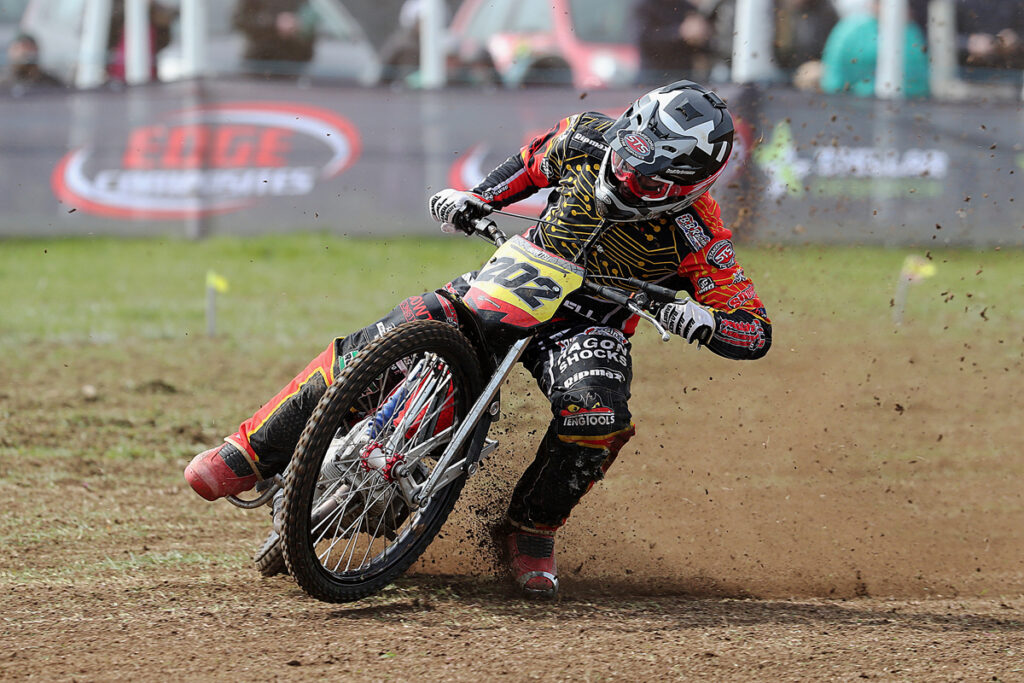 Having his first ride on the grass, 15 year-old talented Ace Pijper, the son of Dutch star Theo, made a storming start in his opening 250cc Solo heat only for the contest to be red-flagged when Chris Malone fell. In the rerun Ace dropped back to 6th although he did muster enough points to make the A final. Making far easier work of the task in hand, defending Bantasia Champion Cameron Taylor was again in fantastic form. The very talented youngster went through the card unbeaten as Chris Still and Luke Harris also picked up impressive heat wins to set up a very interesting final. When the tapes rose though, it was Taylor who hit the front and after seeing off an early challenge from Harris he led all the way to the finish and thus retain his crown as Tim Greig got home 3rd with Still 4th. In the 250cc B final, Kenzie Cossey proved victorious with Austin Riches and Jake Breeze joining him on the podium. 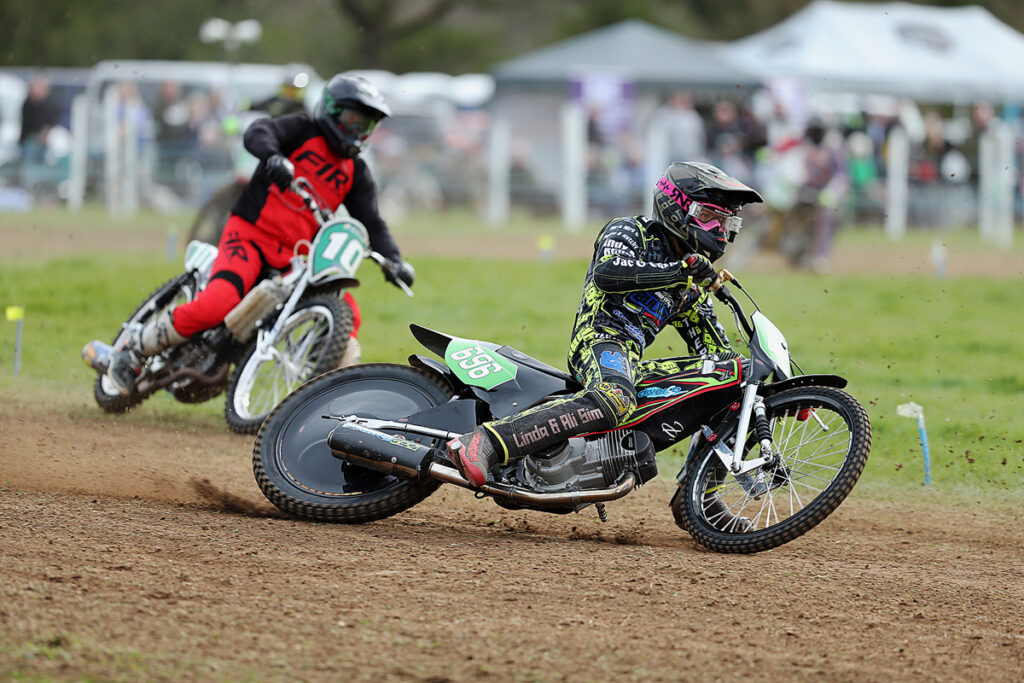 Completing the Bantasia action was an Old and New Sidecars class and Mark Courtney/Leon Torres won all four of their races to convincingly take the overall verdict. The nearest challengers proved to be Liam Brown/Frankie Courtney who claimed the second step on the podium with Chris Tyrell/Willow Jeffrey. Once again it proved to be a busy day for Brown as he was in the chair for 1000cc Right- Hand Sidecar ace Terry Saunters. 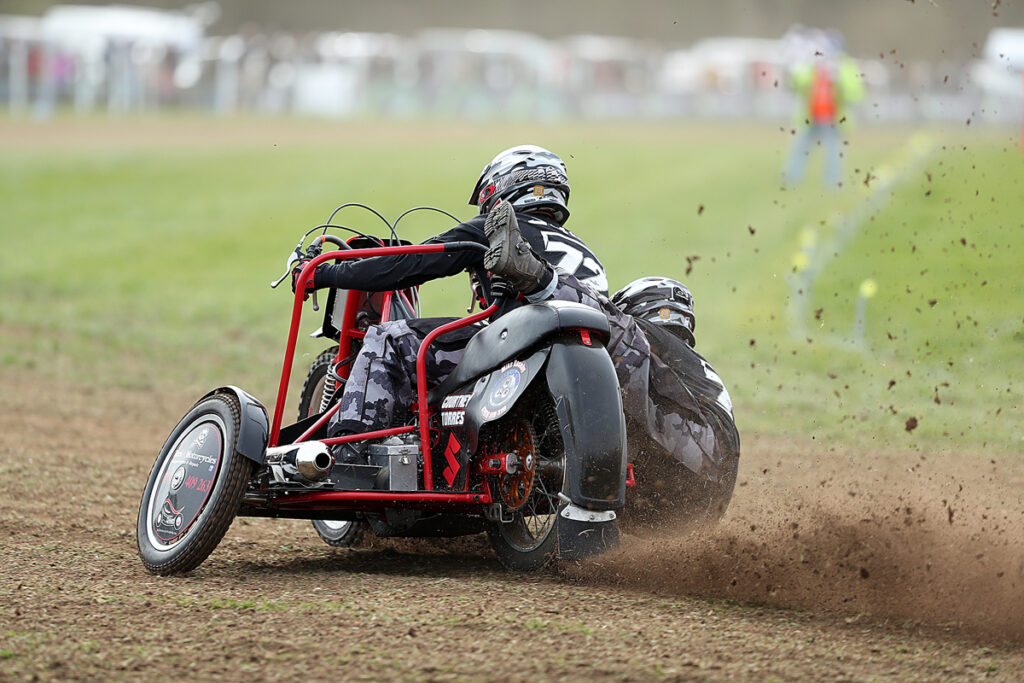 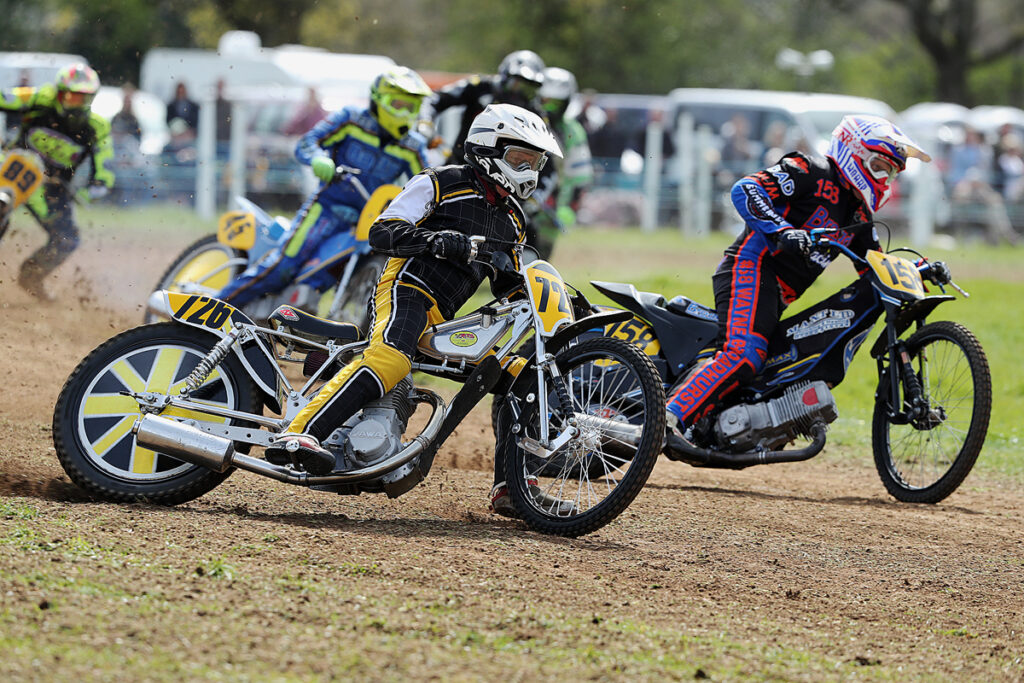 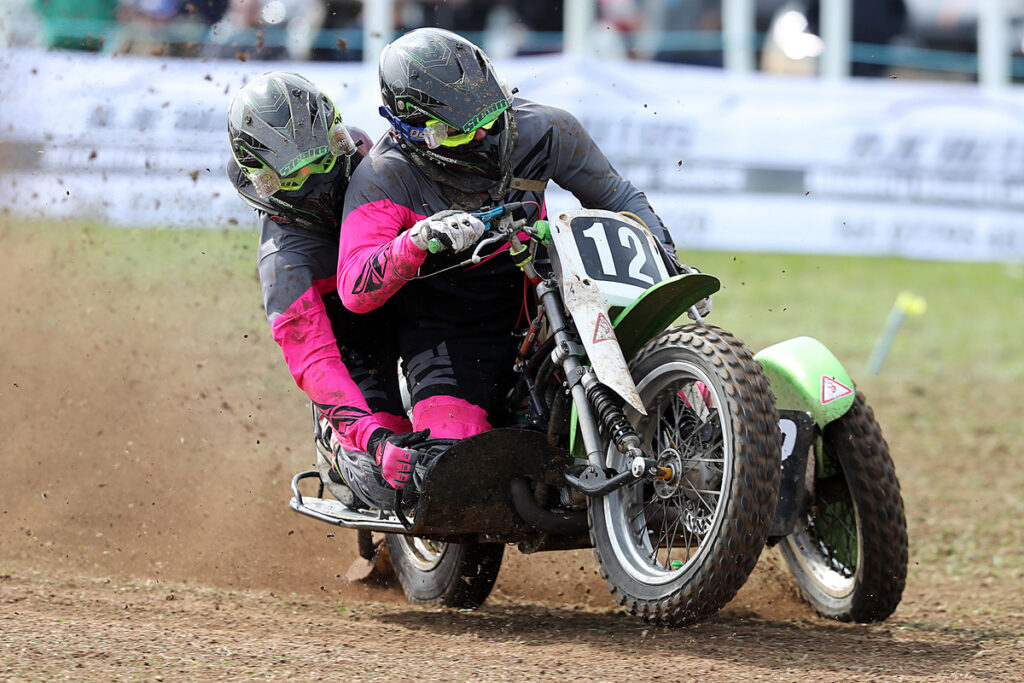 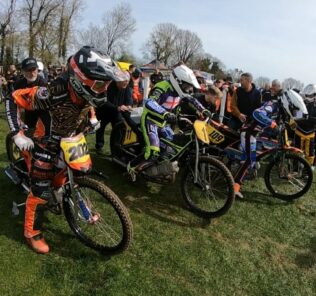 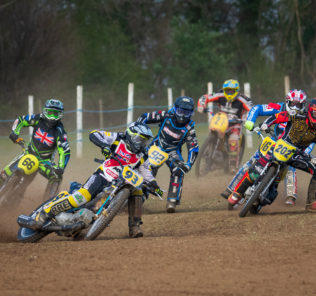 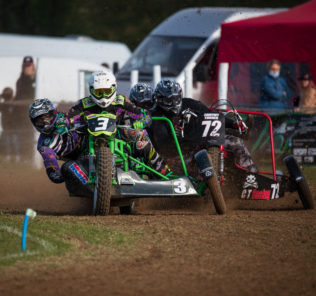