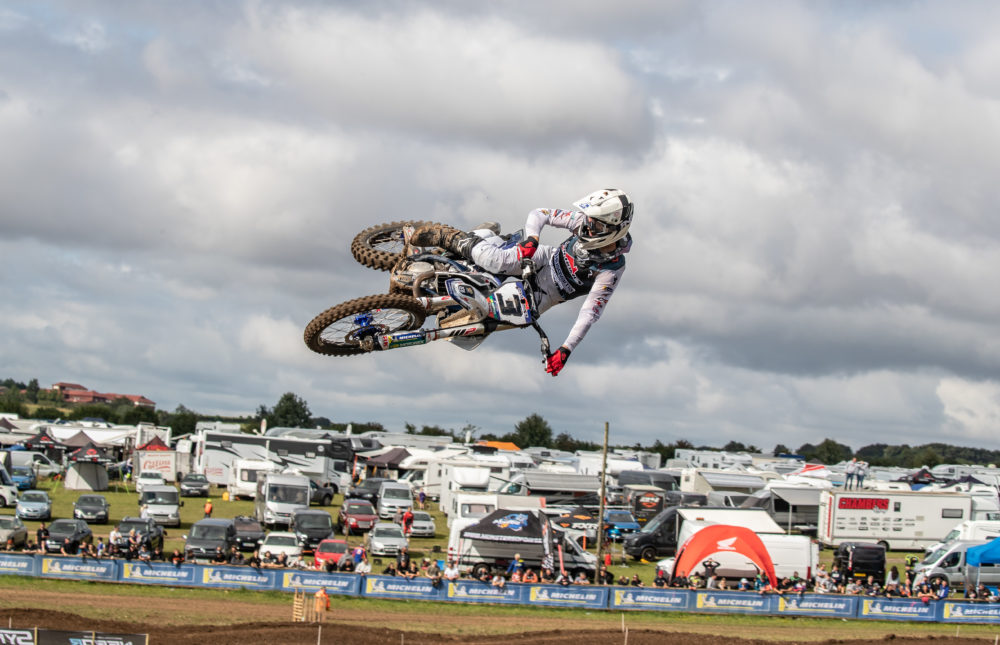 The hammer fell on an epic 2021 Michelin MX Nationals Championship at the Cusses Gorse MX venue near Salisbury at the weekend as the season rounded out in style.

The Pro MX1 title was already signed, sealed and in the hands of the Cab Screens Crescent Yamaha racer Harri Kullas but there was still plenty to race for with a number of riders looking to impress and show their capabilities ahead of the 2022 team signing merry go round.

One rider who put himself well and truly on the MX1 map was Par Homes Husqvarna’s Josh Gilbert who raced to the overall with a 2-1 day. Shaun Simpson was another welcome returnee to the series and took the opening moto win and second in moto 2 for the number two spot on the podium with Kullas reeling off two silky smooth thirds for the number 3 spot on the box. 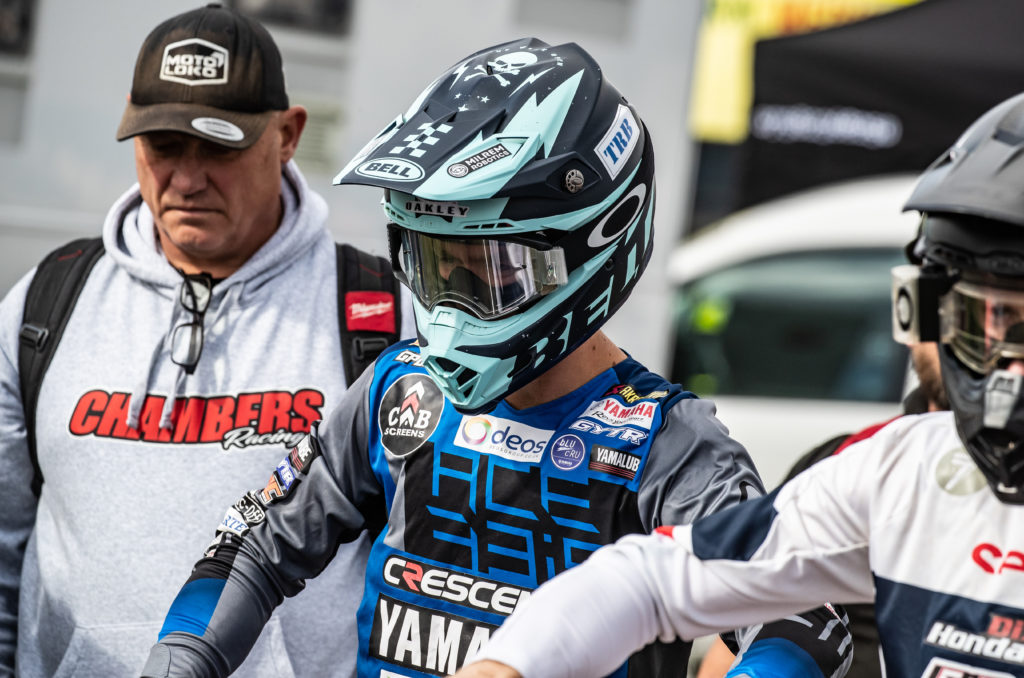 Saturday nights Straight Rhythm Champ Dylan Walsh of the Revo Seven Kawasaki team pitched in with two solid moto’s for fourth while Apico Husqvarnas Stuart Edmonds continued his fantastic form of late with fifth. The Phoenix Tools Apico Kawasaki of Jason Meara had good day with sixth, with Elliot Banks Browne having his best outing for the Oakleaf Construction Honda team in seventh.

Meara by being consistent all season long was awarded for second overall in the championship with Edmonds a well deserved third.

While MX1 was done and dusted the Pro MX2 title was going down to the wire between Gabriel Insulation KTM’s John Adamson and the Phoenix Tools Apico Kawasaki of Carlton Husband.  Just 10 points separated the duo and with a stronger start in the opening moto Husband would reduce the deficit to 8, after he fended off a late Adamson charge. 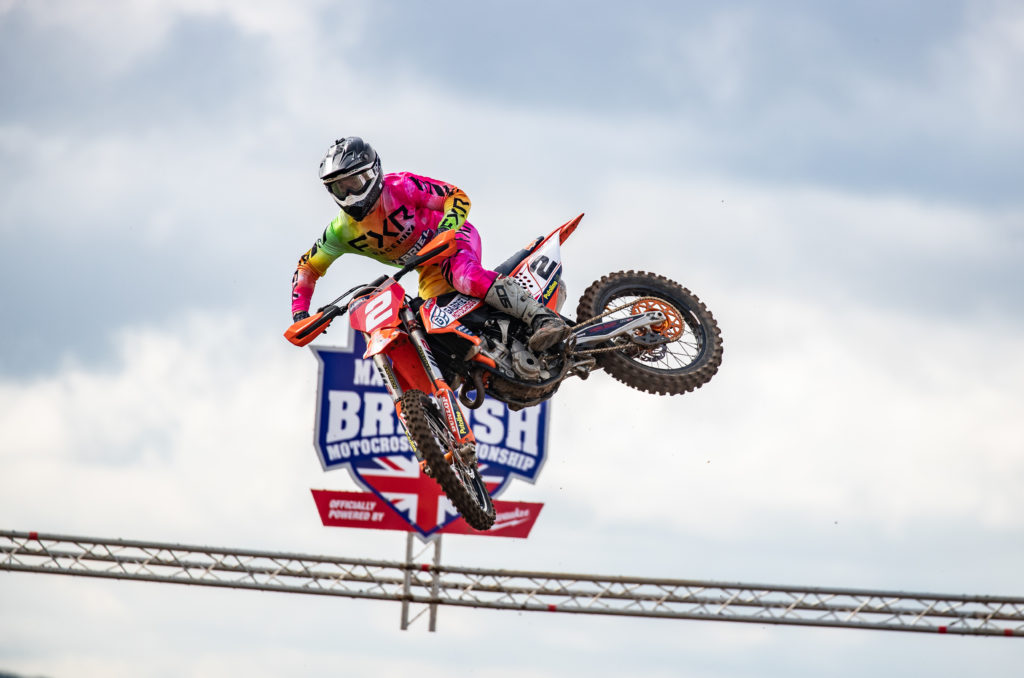 Husband’s title race would come crashing down on the opening lap of moto 2, and try as he might he couldn’t reel in Adamson who was going for the moto win duking it out with the Par Homes Husqvarna of Florian Miot and Michael Ellis.  Adamson would see out the moto in second and in doing so would be crowned MX2 champion after what has been a stand out season for the Scottish Racer.

Ellis would show great form by winning the opening moto and with a third in the second race would finish the day in second overall behind Miot who showed his credentials with a 2-1 for the number one spot on the day. Adamson would round out the day with third ahead of another Par Homes Husqvarna racer Callum Mitchell who had his season-best performance in fourth. Tom Grimshaw of Chambers Racing Husqvarna went 5-5 for fifth with Husband sixth.

So on the Championship podium, Adamson and Husband were joined by Miot who finished a superb third. 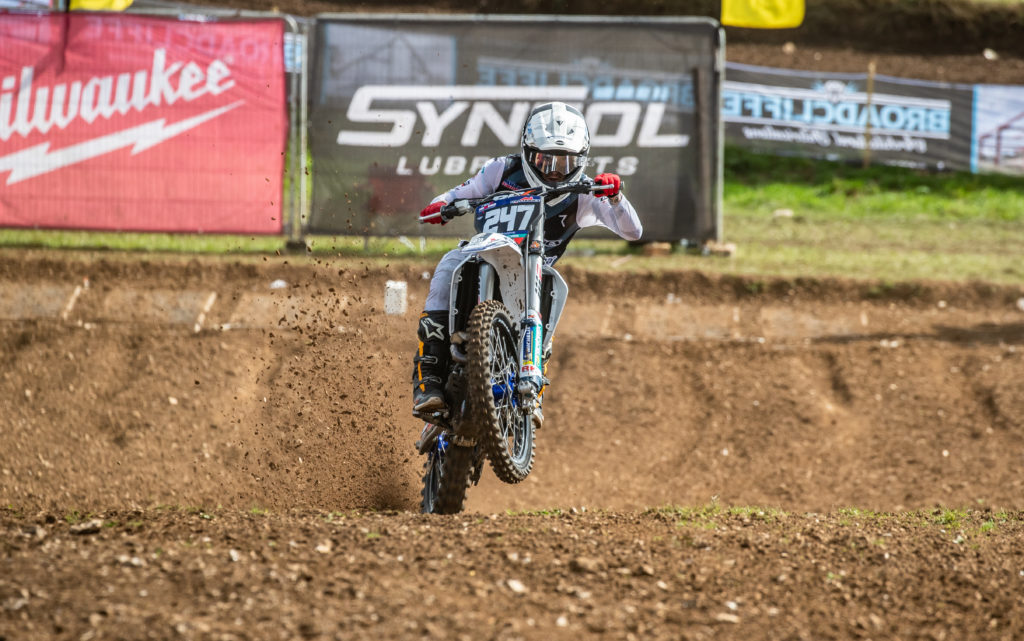 In Expert MX1 Ben Edwards consolidated his series lead finishing the weekend in fourth and taking the title by 53 points over Joe Clayton and Richard Bird. Talking of Clayton he would have another great weekend, continuing his battles with Josh Taylor and taking back to back overalls. Taylor would finish the weekend in second with Charlie Putnam proving good value with third.

Bobby Bruce put the hammer down on his ASA United Gas Gas 125 and blitzed the Expert MX2 field with four wins from four to grab both the weekend overall and the title. At Cusses Louie Kessell had a great weekend with second over Ollie Beamish in third. In the series Jake Preston did enough to secure second with Tom Murphy third. 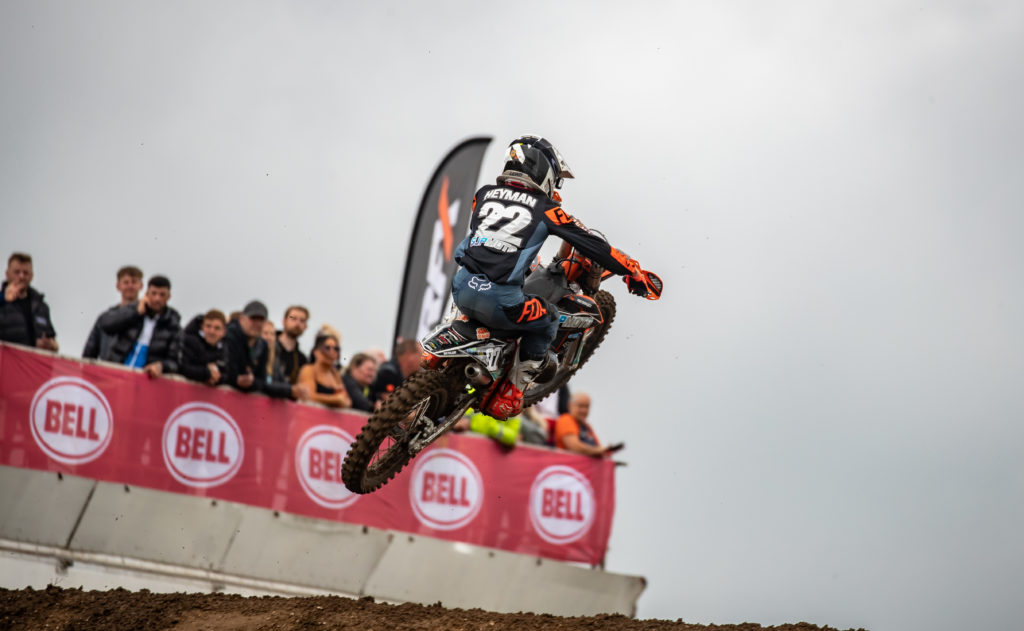 There was plenty of drama in Amateur MX1 with Sean Wainwright notching up another moto win in the opening race to nail the title before crashing out of the meeting in spectacular fashion in the second race.  (Check out @wrkmma on Instagram to see the crash in sequence). John Kirk had a steady weekend with fifth overall which secure second in the championship for him but the battle for the final podium spot went down to the wire with David Rushton, Brad Thornhill and Callum Gordon all in with a shout of that honour.  When it mattered though Rushton pulled off a fantastic moto win to gain the podium spot whole Thornhill suffered mechanical issues and Gordon was caught up in other riders mistakes. So the final top five in the series was Wainwright, Kirk, Rushton, Thornhill and Gordon in that order. The weekend overall went the way of Harry Bradley with Rushton second and Joshua McCorkell third.

A moto one DNF for Dan Brough all but ended his Amateur MX2 title chances and Shaun Springer showed why he was to be crowned champion with a sublime performance taking maximum points and the weekend overall. Brough would still claim second in the series with Aaron Gardiner edging out Harry Foster for third.  Behind Springer, in the round 5 results were Isle of Wights Mitch Young with Josh Greedy third. 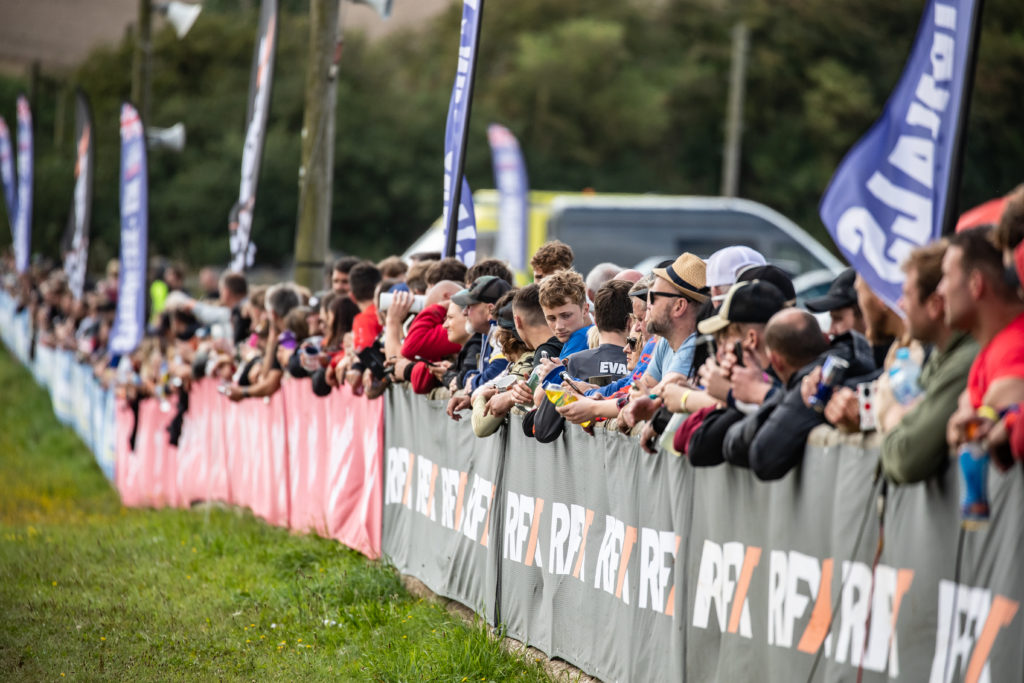 After a phenomenal performance at Landrake Alex Christopher just need to pitch in with 4 good motos to claim the Clubman MX1 crown and he did just that, signing off also by taking the chequers in the final moto.  Over the weekend though the round 5 honours would go the way of Grant Martin over Mitch Best in second and Billy Sanders third.  Christopher as previously mentioned was the series Champ, with Ivan Kerr second and Matthew Pocock third.

In Clubman MX2 Ben Wainwright firmed up the 2021 title which he would claim ahead of Elliott Pugh and Ricky Roberts.  At Cusses Cam Mcdonald joined the party and 2-1-2-1 to take the overall in front of George Boyce and Roberts. 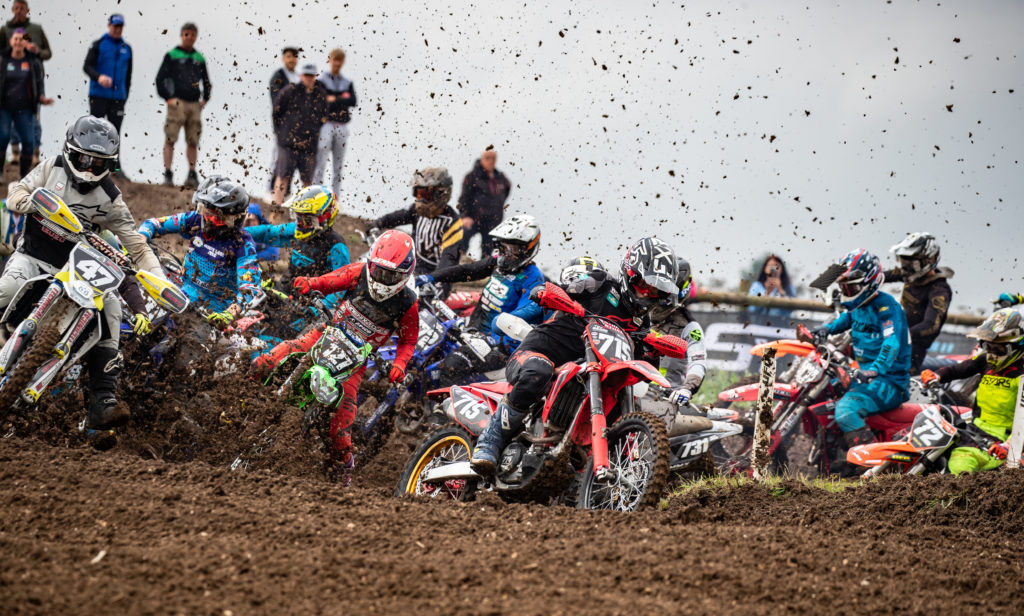 SJP Moto KTM’s Charlie Heyman made it back to back Michelin MX Nationals titles by winning the MXY2 championship by a whopping 98 points over Raife Broadley and George Hopkins.  The weekend win though went the way of Cab Screens Crescent Yamaha racer Joe Brookes who beat Heyman to the chequers in the final moto to stake his claim on the round victory. Heyman was second with Broadley third.

The Big Wheel 85’s title fight was the most dramatic of the lot with a last race showdown between Team Matt Gardiner racer Ben Mustoe, and the SJP Moto KTM rider Billy Askew.  Askew had a one point lead going into the final moto but both racers threw everything at it swapping the lead with the the race going down to the line with Mustoe getting his nose ahead for the moto win and the title. Fantastic racing and sportsmanship from these young riders.  So the series podium was Mustoe, Askew and Tyla Hooley third.  Finley Evans was the weekend winner ahead of Mustoe and Hooley.

In the Small Wheel 85’s GRT Holeshot KTM’s Cole McCullough was fantastic once again and was awarded the title as well as the weekend overall. Cole shared the round 5 podium with Drew Stock in second and Gus Mustoe in third, while in the Championship the number two spot went to Chester Hyde who showed great commitment to push his bike over the Cusses Gorse line in race 2 after a mechanical problem, with Stock third.

After the huge success of the 2021 championship registrations are already open for 2022 so head to https://www.mxnationals.co.uk/ and get involved… 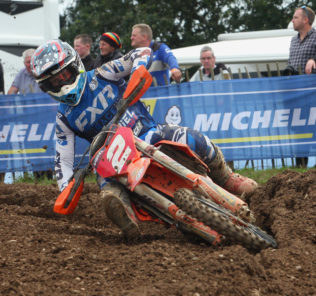 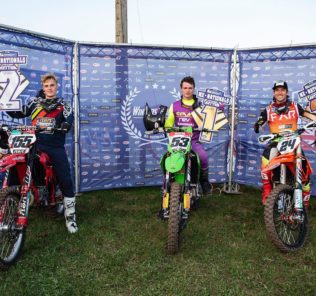 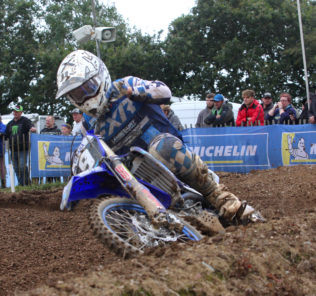 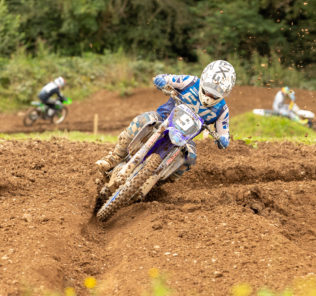 Sam’s the Man at Ludlow! WOR Events Motoduro – Wrap up and Results