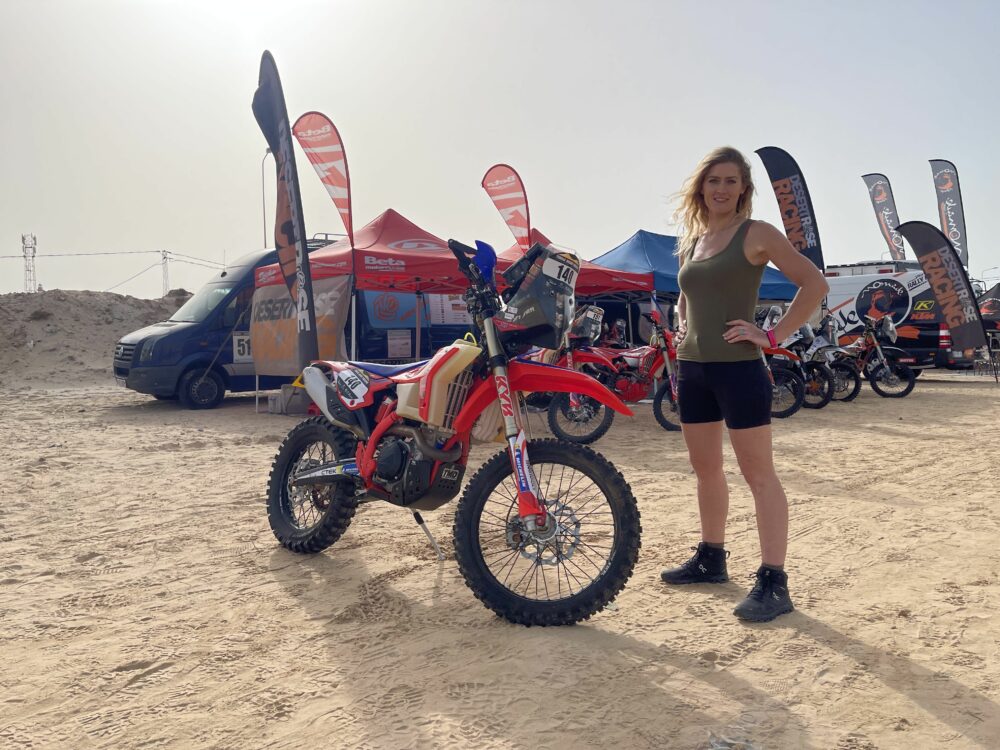 Vanessa Ruck, also known as The Girl on a Bike, has been the first woman to ever enter into the Tunisia Desert Challenge, an extreme rally raid over sand dunes and in blistering temperatures. The 35-year-old UK competitor went on to complete the gruelling 8 day endurance event, covering up to 469km each day and won the ladies class. But it wasn’t all sunshine! She endured sandstorms with up to 85km/hr winds which meant that the race had to be paused, she had bike issues leading to a night in the dunes, and another mechanical failure ending with the rescue helicopter being sent out. Many riders were waiting for hours, some drivers even multiple days in direct sunshine with limited water following issues in the brutal conditions.

Despite being on a motorcycle, only able to take what you can carry, competitors are required to carry various safety items such as flares and emergency blankets. For many these proved to be lifelines. 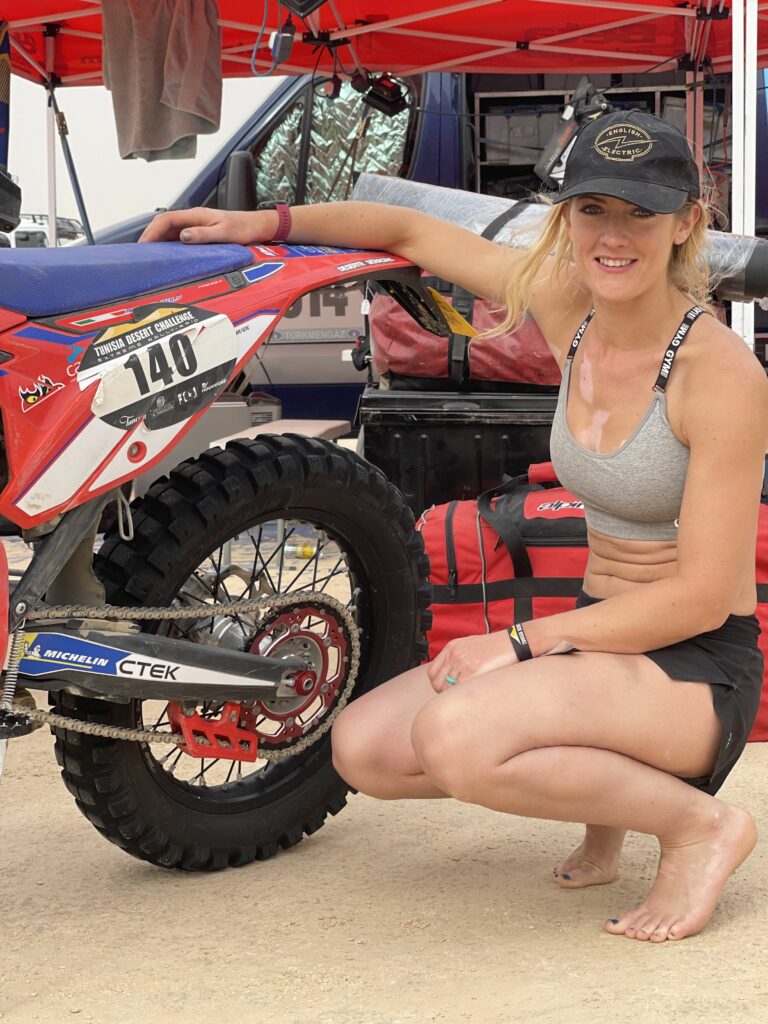 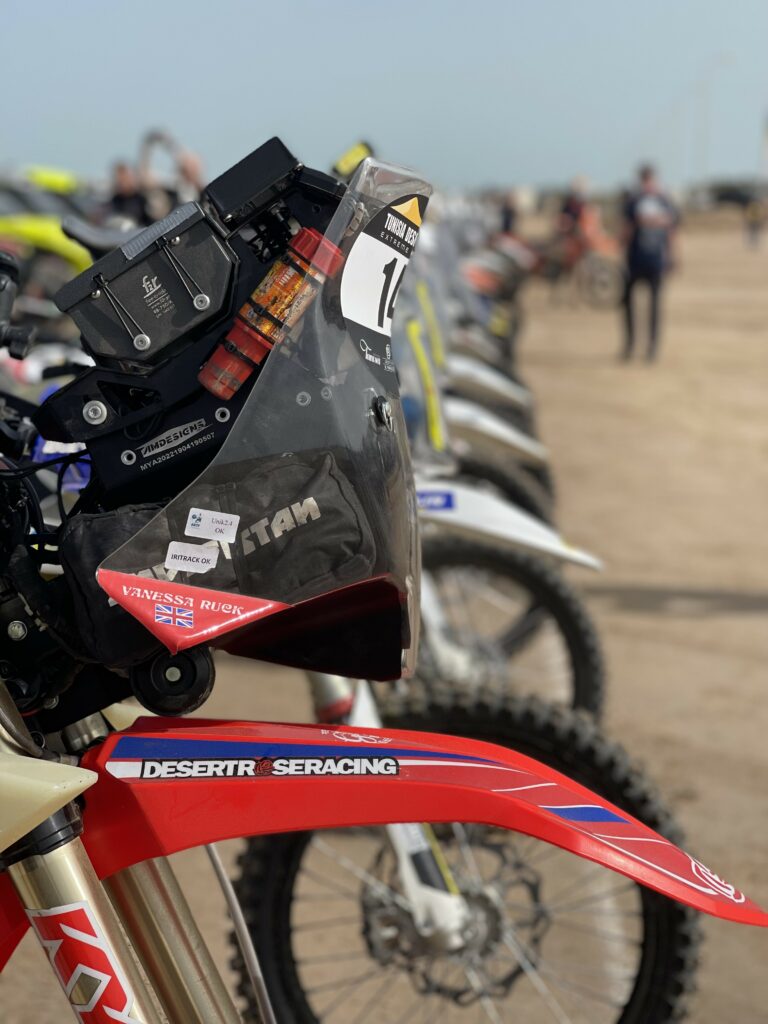 The 3rd stage, through the El Borma dunes, was described by a 10 times Dakar finisher as ‘the hardest day riding of their life’. As one of the many competitors to be recovered Vanessa faced an electrical fault ending her day miles from anywhere. She was the furthest bike of 16 to be recovered, just 6km from the end of 45 kilometres of dunes that day but in those conditions a mere 500 meters is a gruelling slog. She made a campfire and waited for help to arrive. After an exciting rescue in the dark of the night Vanessa made it back to the bivouac at 3.30am, grabbing just 2.5 hours sleep while her Desert Rose Racing mechanic team frantically got her rally bike ‘Sandy’ back to life. Sleepy eyed, it was time for another day of racing.

During the 4th stage, the bad luck continued as Vanessa’s bike malfunctioned at 10.30 AM so she was stranded, again. Miles from anywhere, deep in the dunes the temperatures peaked at 45 degrees. At these temperatures, the body starts to shut down and even with water, severe dehydration and heat exhaustion is just a matter of time. She survived the desert heat by taking water from other vehicles entered into a different class and by mid-afternoon used her bike as some protection from the sun’s deadly rays. 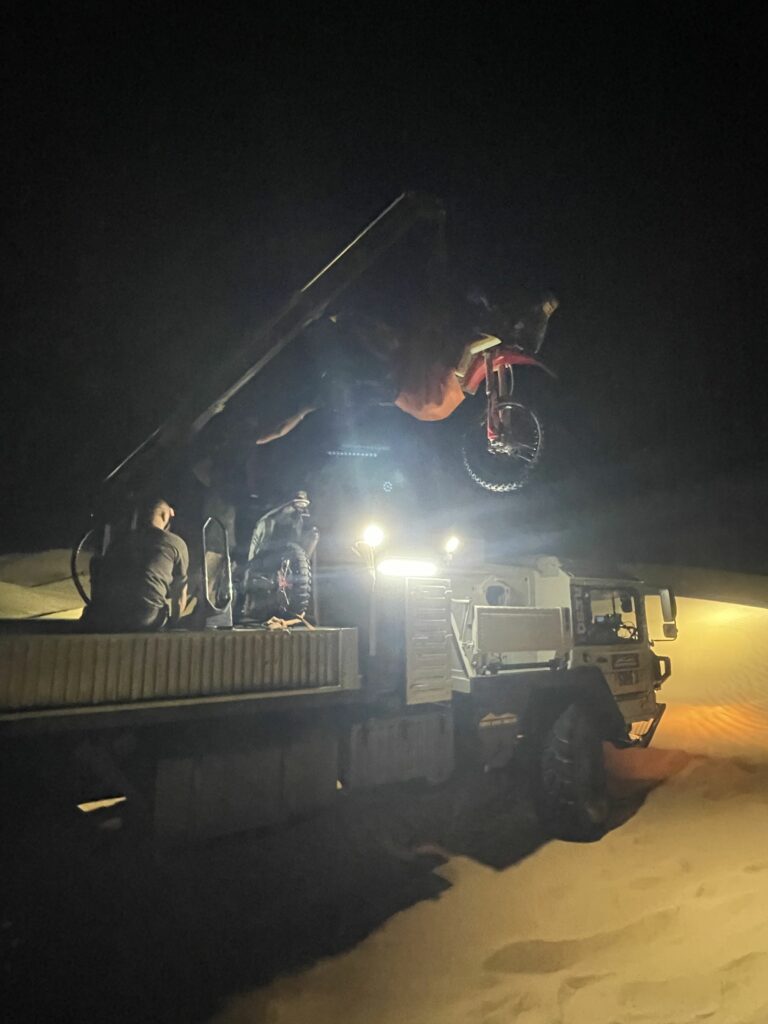 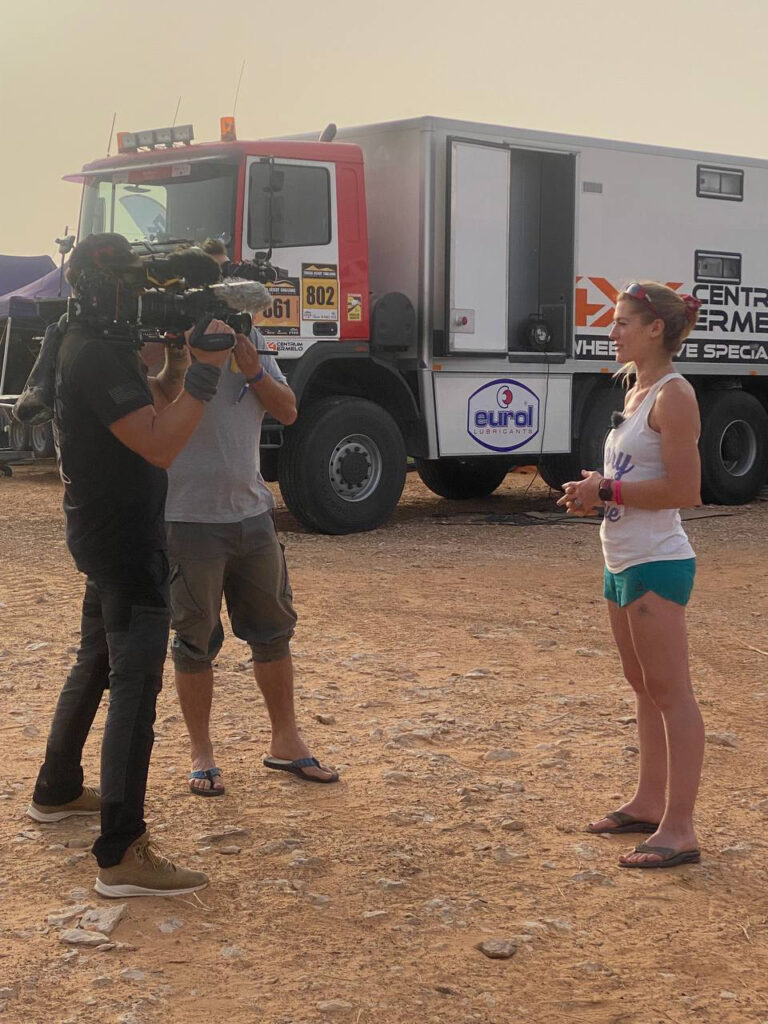 Vanessa said, ‘I had water as thankfully passing cars, trucks and buggies gave me some, but by 5pm I was bad. I called for an emergency evacuation and when they saw me, they were clearly scared. I was terrified. I had been trying not to breathe in the hot sand but it felt like my head was going to explode. I was delirious and was put on a drip. One competitor sadly died due to the heat as they didn’t activate emergency support from the organisers, I’m glad I found the strength to hit the button’. 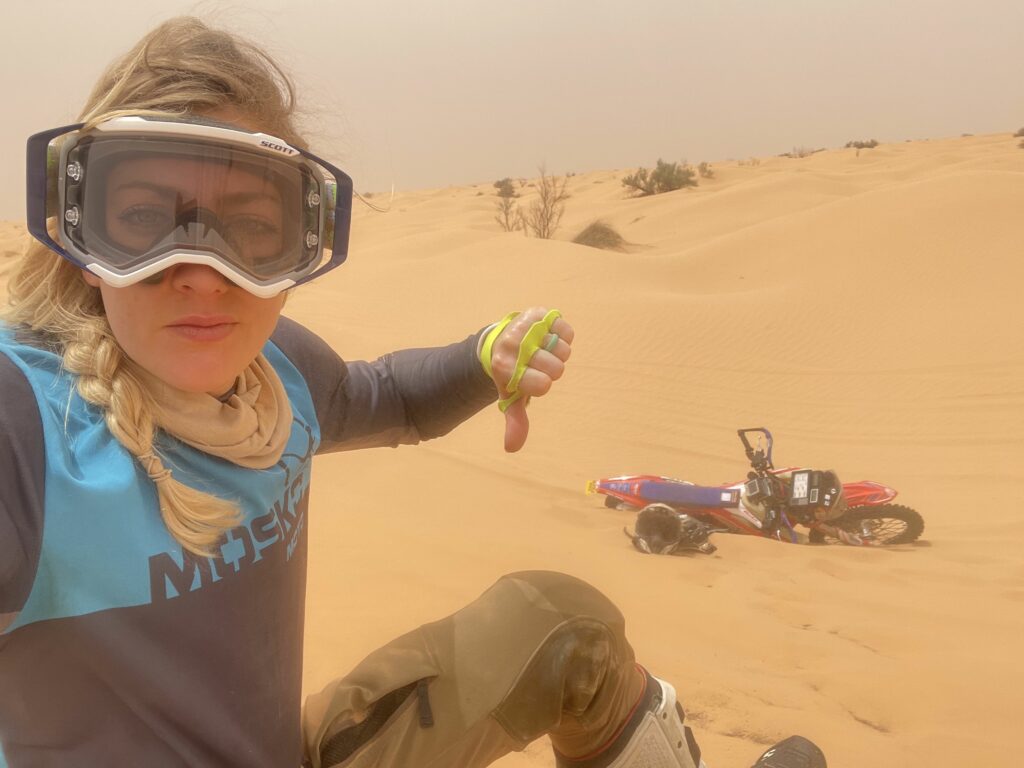 The camaraderie amongst the competitors was high, and the organisers made an announcement when Vanessa was rescued safely as the questions for her wellbeing were incessant! She carried on with the next stage, and the next, battling the daily challenges of the Tunisian Desert Challenge, and went on to become the first ever female to enter and finish this tough endurance event. 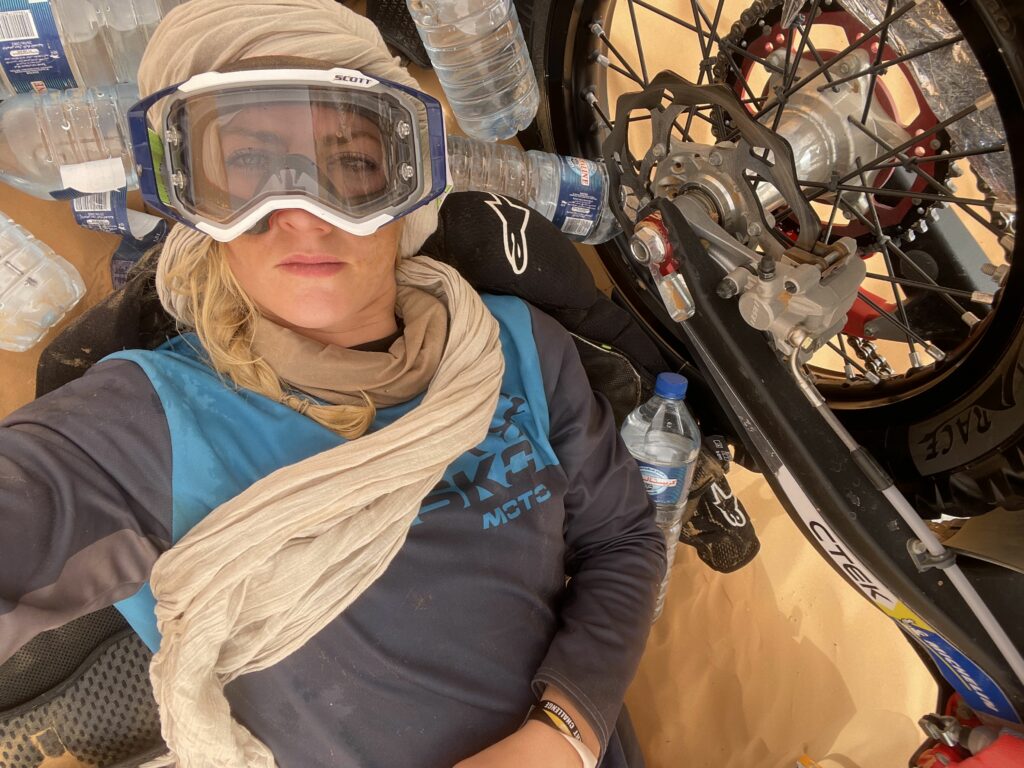 Vanessa’s story is one of true resilience and utter determination so it’s no surprise to her social media followers that she finished! She describes herself as just a normal girl who faced one of life’s big curve balls. But after being hit by a car while cycling in 2014, resulting in 7 surgeries and a roller-coaster of mental and physical recovery spanning 7 years, taking on Tunisia was no mean feat! 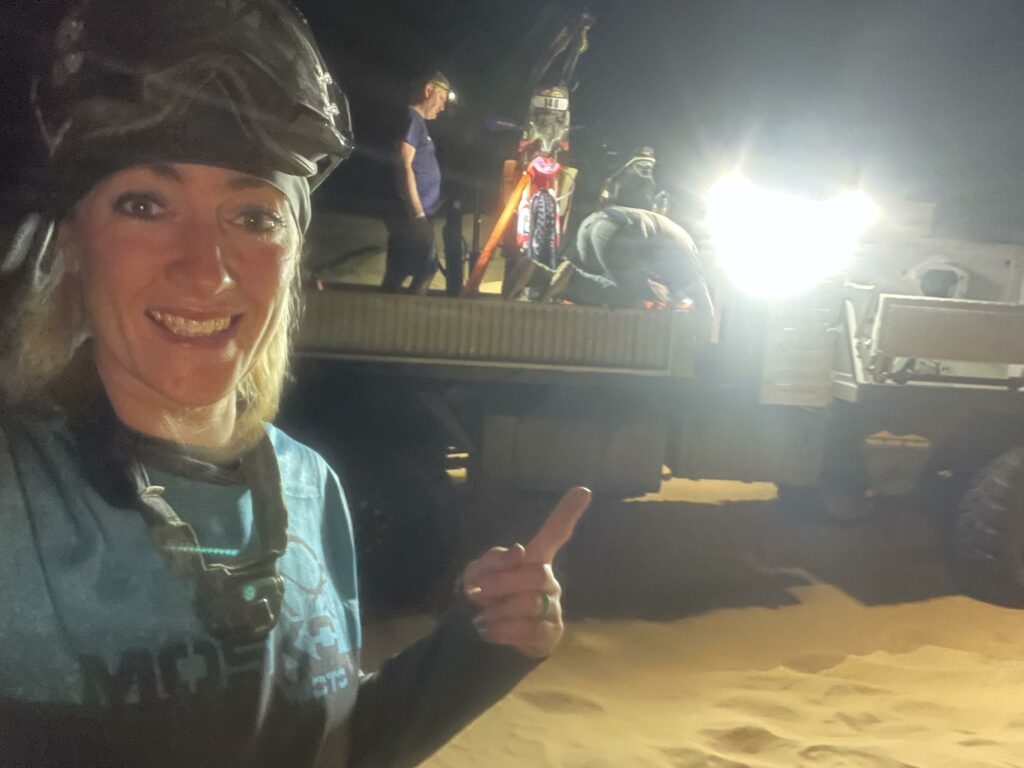 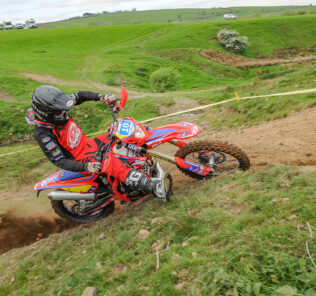 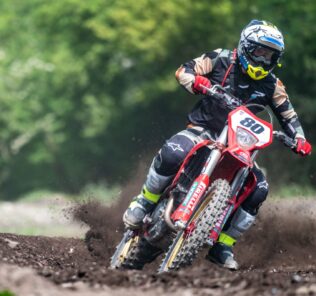 Riders To Watch At FIM Hard Enduro Round Two In Serbia

2022 Revo ACU British Motocross Championship Round 3 – Preview, Event i...
Next