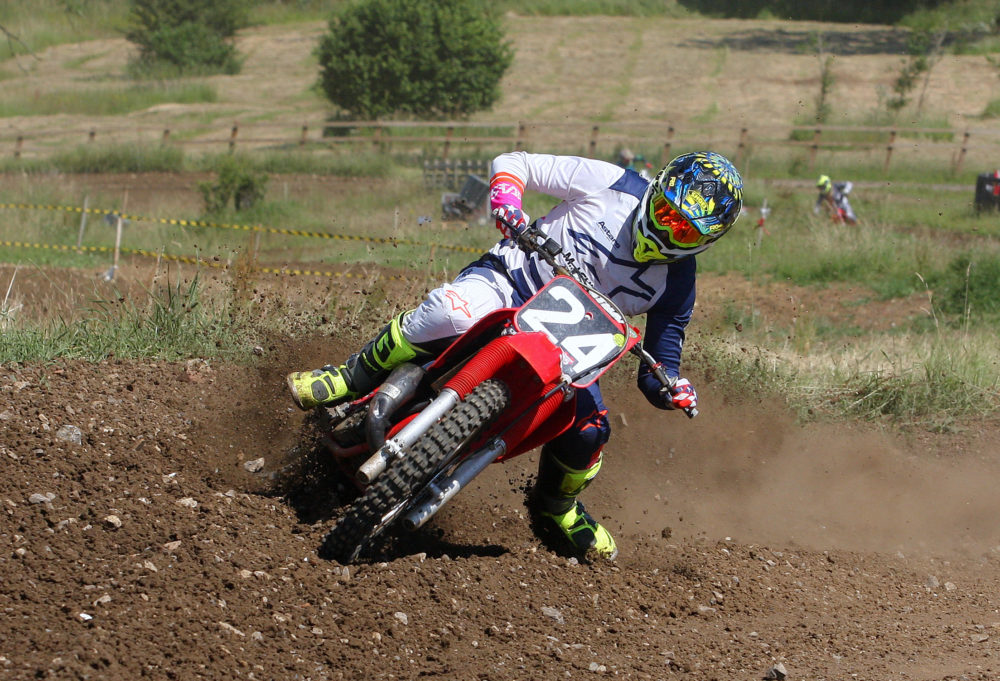 Back on Sunday, July 18th the UK EVO MX team were at Marshfield for round six in the series which had attracted a fair entry in all classes considering what other meetings were on and there was some good racing on a well-prepared track with plenty of water being put down prior to the meeting and good job it was as it was one of the hottest days of the year.

The Evo 125 class which had produced some fast and close racing at earlier rounds continued at Marshfield with yet again some of the best racing on the day.

In the opening 125 race, it was Elliott Barrs with the best start from John May and Glen Bixby just ahead of Tom Church. May was in a real hurry in this one and straight away was to pressure Barrs for the lead which he took passing Barrs exiting the third corner, but Barr’s was not giving the lead up that easy as he came back towards the end of the opening lap and regained the lead. Church had now moved up into third but he didn’t seem to be at the same pace as the two at the front as they were to ease away with virtually nothing between them for most of the race until the last lap when May started to show his front wheel to Barrs and with just over half a lap remaining Barrs was to run a bit wide on a fast lefthander and May shot through on the inside and it was a race to the line with May holding on to take the win by 0.860 of a second with Church some eight seconds back coming home in third. 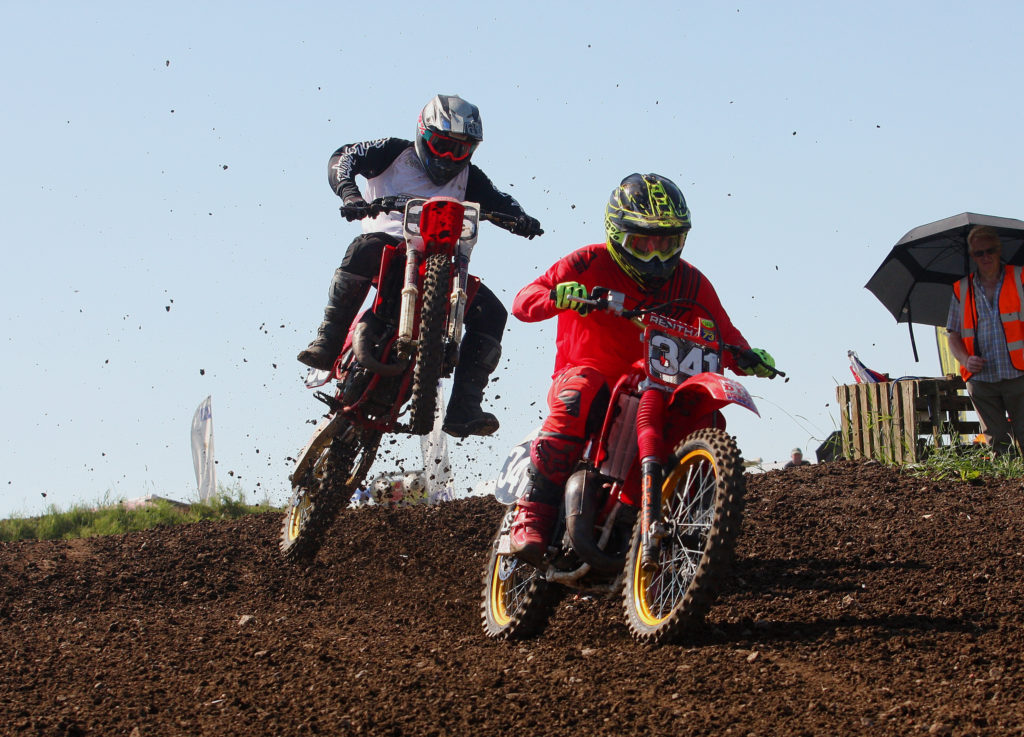 In the second moto, it was a better start for Church in this one who sneaked through on the inside at the first corner to lead from Barrs with Josh McGill in third with May emerging out of the first corner in 4th who was all over McGill on the opening lap eager to get past which he did on lap two. Church who was on home soil was looking good at the front and soon put a cushion between himself and Barrs mid-race with Barrs now being chased down by May who was challenging again in the closing stages, but Barrs held strong to take second behind Church with May a close third.

The last race and it was Barrs who led early doors from Church with McGill again tucked in third with May again in 4th, but a first-lap spill saw May drop down to sixth. Barrs and Church were absolutely flying at the front and were to power away from Bixby who was now in third but soon had May all over him looking to go pass which he did at the halfway stage. Meanwhile back at the front Church had got the better of Barrs and took the lead and was pulling away all the time at the front and from there went on to take the win by thirteen seconds from Barrs with May a distant third. 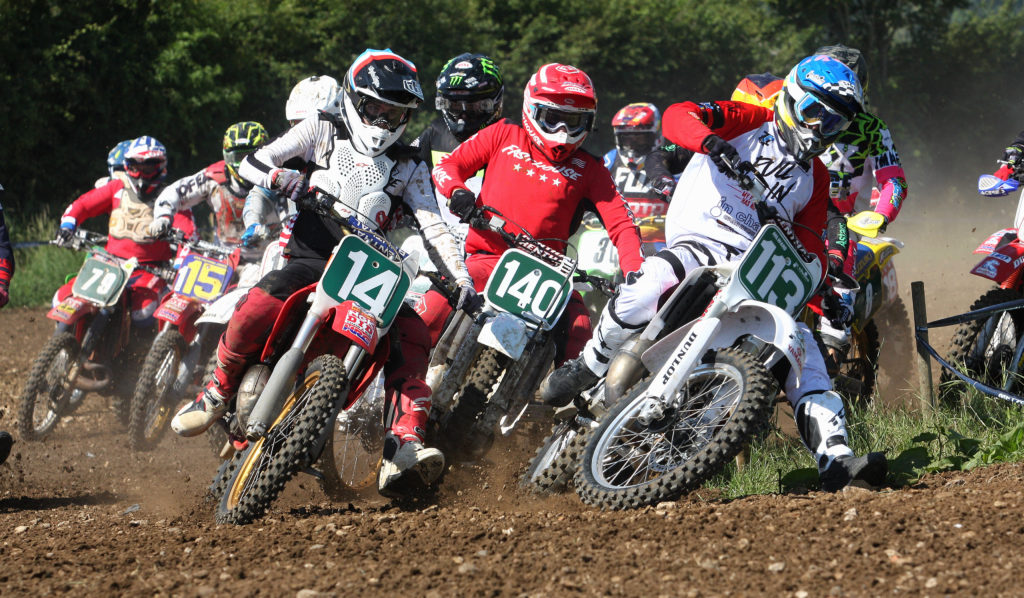 The 250 Evo class saw a dominant performance from Ben Milward on his YZ250 Yamaha who in the opening race had the inside line into the first corner which he held to get the holeshot from fellow YZ250 rider James Kensington with the CR250 Honda of Ben Hodgkins in third. Milward who had a clear track in front of him was soon into his rhythm and was to ease away every lap, Hodgkins was to get the better of Kensington on lap two to move into second, but Kensington was to stick with him and retook second place a couple of laps later and this time Hodgkins had no answer and Kensington got away, but he wasn’t going to catch Milward who took the win by some 24 seconds. The second moto was a bit of a procession with Milward leading from the off and going on untroubled to the chequered flag, Kensington took second with Hodgkins again finishing in third.

In the last race, Milward made it a hattrick of holeshots with Kensington in second with Hodgkins in third, but it was to change on the opening lap as Milward made a slight mistake and Kensington tried to miss him but was to clip Milward’s back wheel and went down and was totally last. Hodgkins moved into second with Daniel Hartley yet another YZ250 rider now in third who was soon all over Hodgkins on the opening lap and got past and was to try and stay with Milward, but it was to no avail as Milward went on to take yet another win with Hartley second and Hodgkins third with Kensington coming through from last to take a commendable sixth. 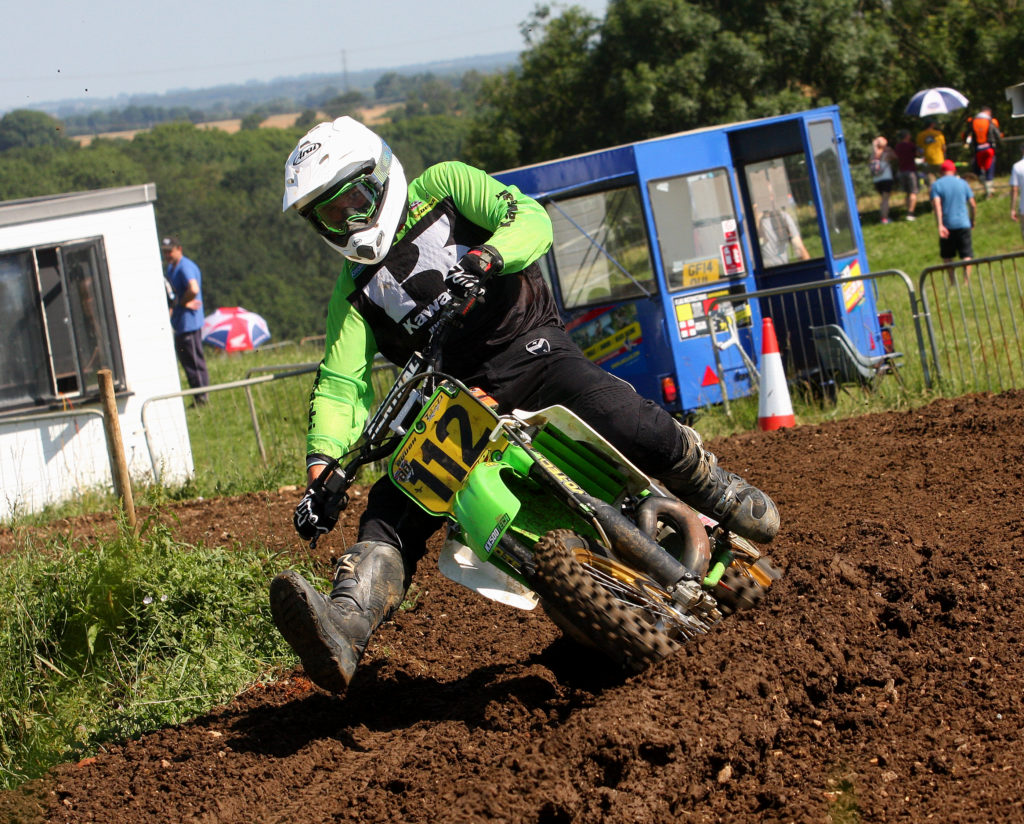 George Gough in action in the Evo 500 class

The Evo 500 class saw a dominant ride from Tom Gilbert on the CR Honda in the opening race and he looked set to win the second moto with just two laps remaining but unfortunately for Gilbert he picked up a front wheel puncture and was forced to slow up and through to take the win came, George Gough, on his KX. Going into the last race Gilbert and Gough were tied on points so who was going to take the overall. Gough got off the line with ease and led from the off from the KX Kawasaki of James Price with Fred Heath on his CR Honda now in third, but not the best of starts for Gilbert who was back down in eighth. Gough wasted no time at the front and eased away from Price and Heath who were both caught and passed by the flying Gilbert who was making up for his bad start, but Gilbert had to settle for second behind Gough with Phillip Peaster on the CR Honda coming through in the latter stages to take third.

The Super Evo Under 45 class saw Welshman Andrew Gillett on the KX500 produce three excellent rides to notch up a clean sweep of wins, with Gary Brown on the CR500 who did lead the opening race for a while finishing second to Gillett in the first two motos, but a bad start in the last race saw Brown way down the field, but he did claw his way back to finish third behind the CR500 of Richie Frankcom.

In the Super Evo Over 45 class, it was Laurence Wiltshire who led the opening race for the first four laps before a problem was to drop him down the field a bit and it was the CR250 of Simon Dearing who led for a lap before losing out to fellow CR 250 rider Jason Morris who went on to take the win with Martyn Tucker on his KX250 taking third. The second moto saw Tucker lead on the opening lap before Morris took over at the front, but there was to be a good tussle for second midrace between Tucker and Dearing with them touching bars at one stage before Dearing got through and was to take second behind Morris with Tucker just holding off Max Hendy in the closing stages to come home in third. The last race saw Dearing lead early on from Morris who was to pressure Dearing for several laps, but Dearing who has plenty of experience in this situation held his nerve and did not budge an inch and was to take the chequered flag from Morris with Tucker again taking third. 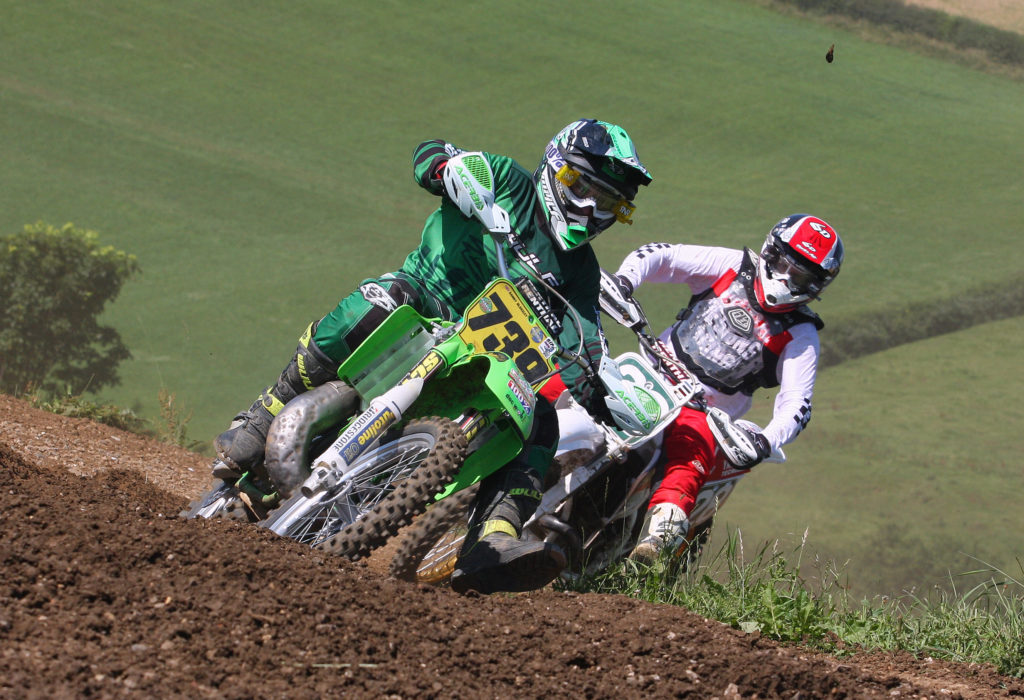 In the Vets Evo Over 45 class there was some of the closest racing of the weekend especially in the first two motos where Danny Blakeley on the KX500 Kawasaki was pushed all the way to the chequered flag by the YZ250 Yamaha of Phil Lewis with Blakeley winning the opening encounter by literally 0.799 of a second and the second moto win was even closer with Blakeley taking it by 0.563 of a second whereas in the last race Lewis this time led from the off and was to go on untroubled to take the win from Blakely.

The 4-Stroke Under 50’s Twinshock class saw Mitchell Griffin take a clean sweep of wins whereas in the 4 Stroke Over 50’s class it was Shaun Church who took the overall with two wins and a second with Chris Smejkal winning the other race. 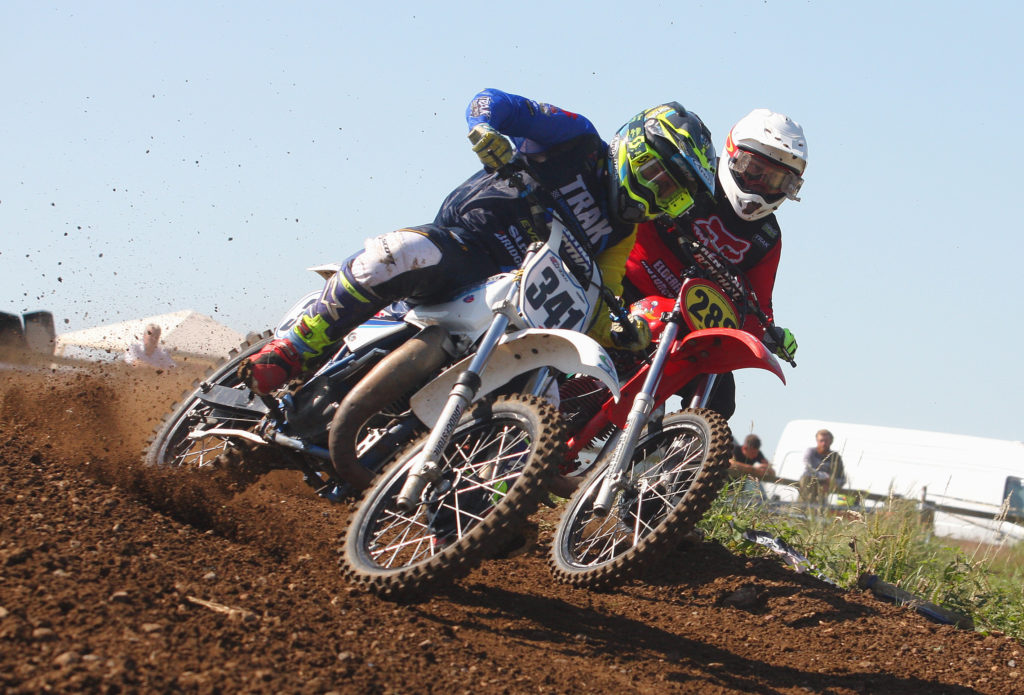 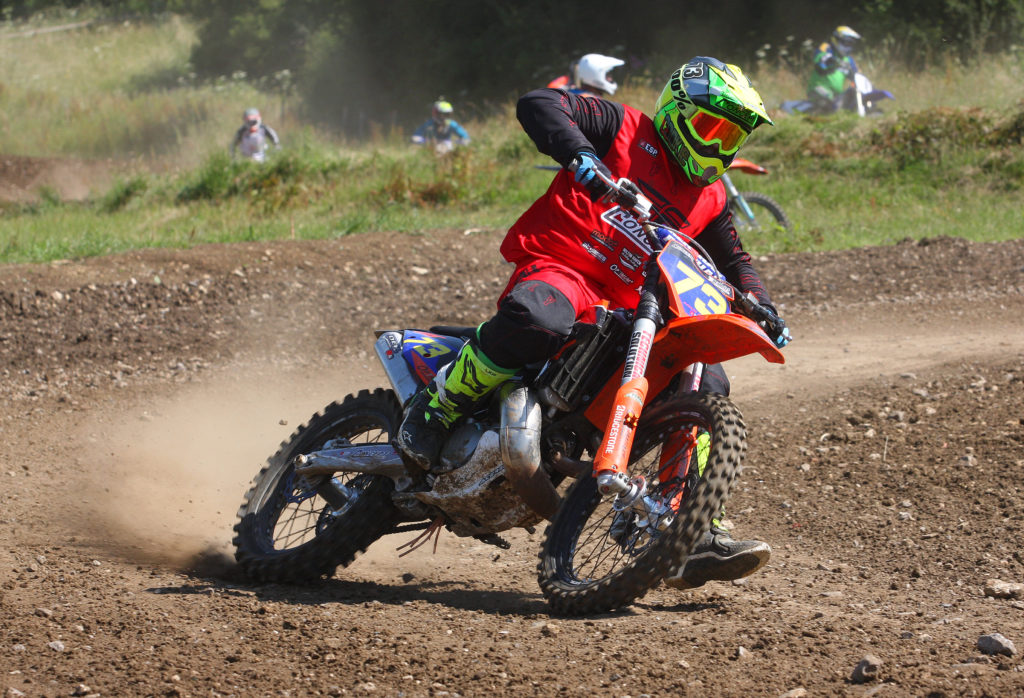 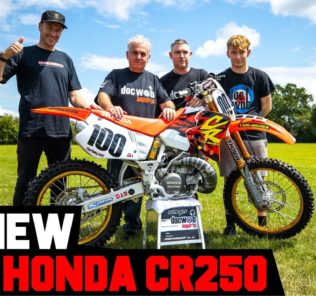 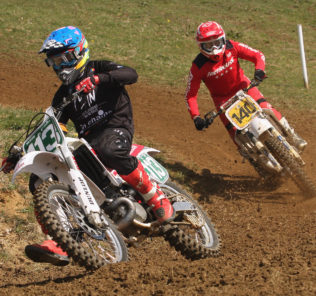 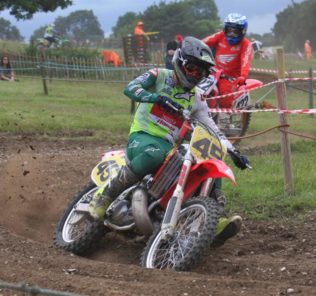 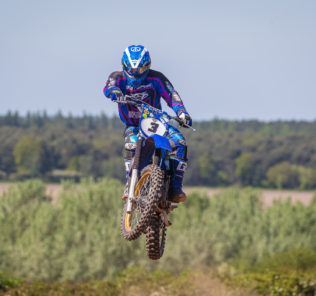 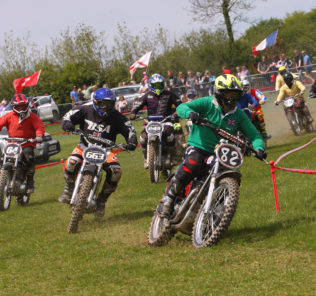 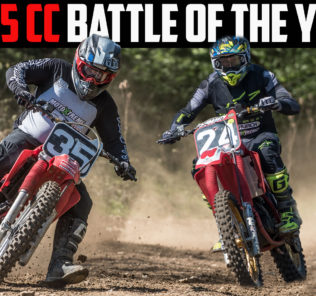