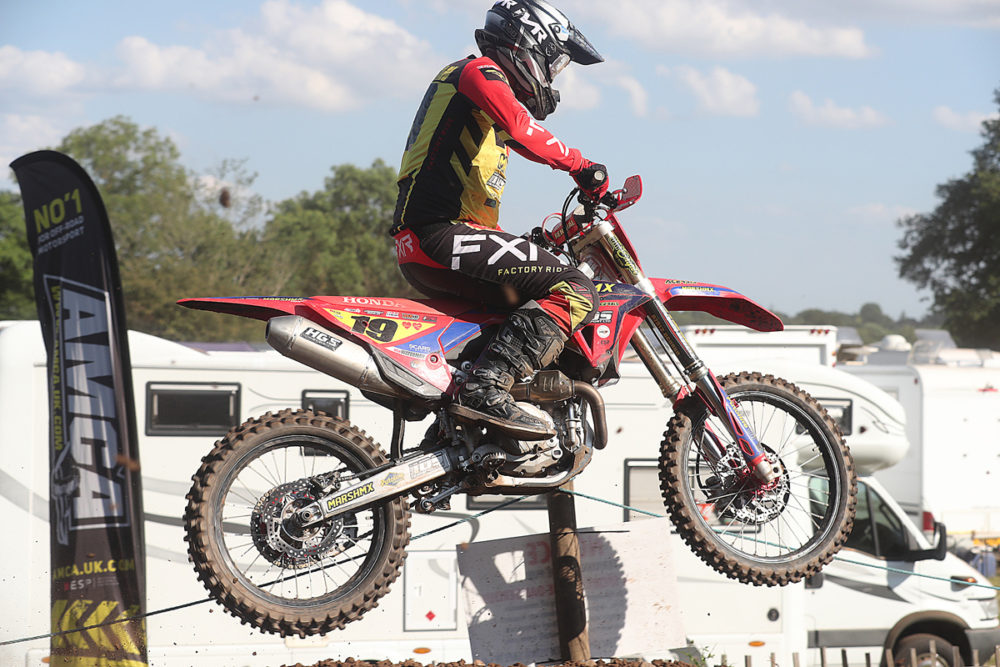 On what was the hottest weekend of the year so far, the Coalville MXC made their debut as hosts of an AMCA British Motocross Championship at Coleorton. And despite the continuous threat of ever-rising dust clouds, to their ultimate credit the Coalville crew refused to be defeated and were all as one certainly up for the challenge having already spent endless hours of hardwork and preparation pre-event. Despite then being forced into two big watering sessions during the event, three full blocks of hot action were eventually completed by 6.30pm. So it’s a massive well done to all the club officials and marshalls for their determination in getting the job done !

So this was round six, and having now passed the mid-point in this super series powered by Datatag and supported by Dunlop, one man who refuses to be removed from his pole position at the head of the Championship table is MX1 leader Ashley Greedy. At Coleorton, the LHRT Kawasaki rider took another podium placing in 3rd behind winner Josh Waterman and James Dodd, two riders who are still very much in the race for the title. In moto one, it was defending Champion Luke Burton who was to take the win after Jamie Skuse had initially grabbed the holeshot in a clash which also saw Adam Wells briefly lead the way for a couple of early laps. With Wells eventually dropping down to 7th, Waterman eventually got home in 2nd after a superb race-long tussle with Luke Hawkins, Greedy and Dodd. 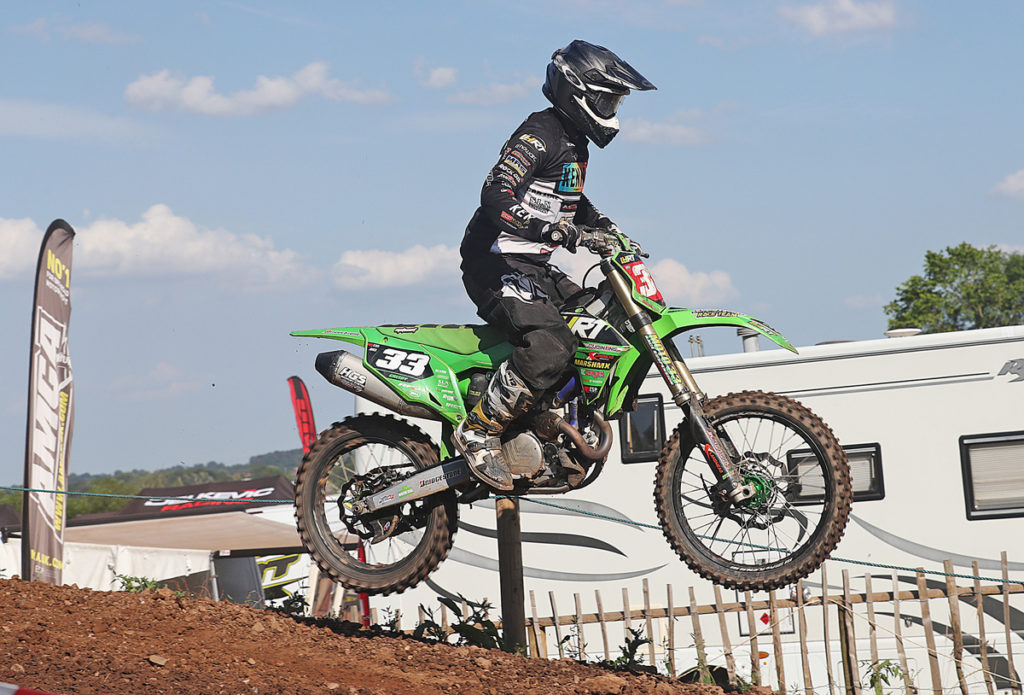 Racing on his home club circuit, Burton was keen for another MX1 win in moto two and quickly he was right on the tail of fast starting early leader Will Hughes. Before the completion of lap one though there was to be drama as Hughes went down and Burton hit the carnage, thankfully both lads being able to quickly jump to their feet and continue competing! Incredibly just a single lap later and Burton tasted the soil again in exactly the same spot as his earlier tumble. Whilst Burton dropped down to 14th, at the front there was to be a stunning three-way battle for supremacy. Eventually taking the win was Waterman after seeing off Dodd and Greedy, what a high-class tussle that was! Taking a rather lonely 4th spot was Hawkins ahead of Strydom having his best ride of the season so far, Mackrel and Dean whilst Burton had to work hard for 11th with Hughes getting home in 13th. 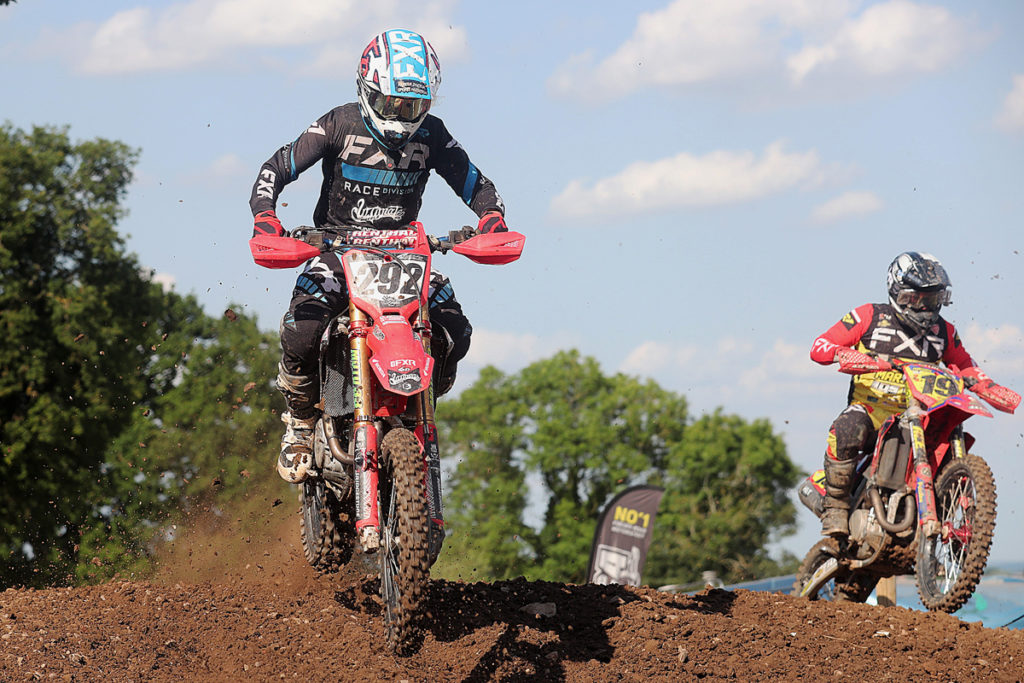 James Dodd(292) and Josh Waterman battling it out in MX1

Dean then led the final MX1 charge in what was to be another classic contest as Greedy, Dodd, Waterman and Hawkins got through to indulge in a serious battle for honours. Three laps from home and the cool Dodd took control for the win from Waterman as Greedy encountered a few anxious moments after losing the use of his Kawasaki’s front brake but still took what could prove to be a vital 3rd spot finish. In the race for the title, just 27 points separate leader Greedy, Dodd and Waterman and with a ‘double header’ next up at Brookthorpe it’s certainly all still to play for in this one! 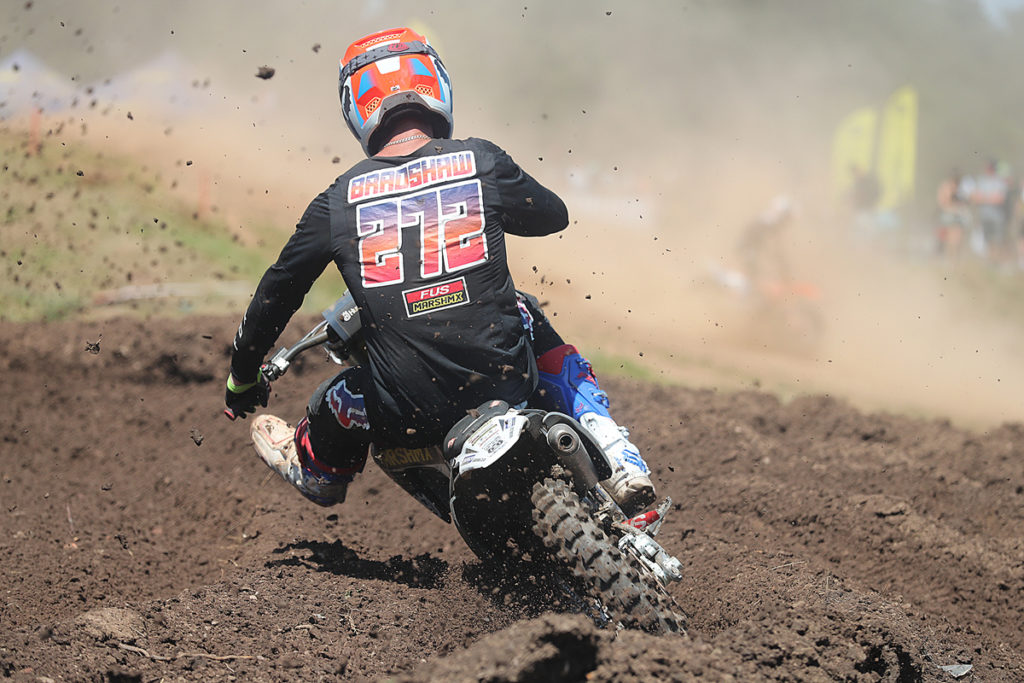 What a dramatic contest the opening MX2 moto at Coleorton was to be as young Rossi Beard grabbed the holeshot and lead the way for three blistering laps. By lap four though the race picture had dramatically changed with Beard crashing and dropping down to 10th whilst Jamie Wainwright went out of the contest. Riding on home soil, Jamie suffered a spectacular off, cartwheeling several times before coming to a halt when holding 5th spot. At the front, Shane Carless was in control and there he remained as Henry Williams worked overtime to resist heavy pressure and hold off series leader Nev Bradshaw for 2nd. Also in the mix were Ray Rowson, Josh Coleman, Cory McShane and James Hanscomb. 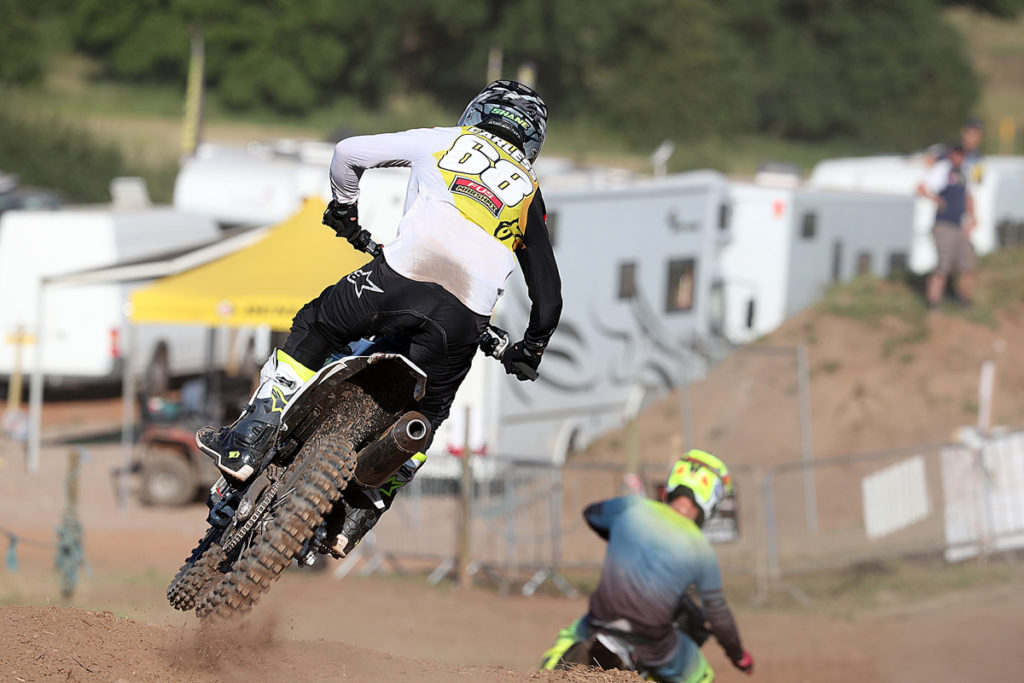 Despite being very battered and bruised, Wainwright started moto two and was to take a hard-earned 2nd after seeing off the challenge of both Williams and Bradshaw. At the front, though a very focussed and immaculate Carless led the contest from gate to flag as his teammate Bradshaw eventually got home in 3rd. As per moto one, all of the above names mentioned earlier got home again inside the top ten joined on this occasion by Lee Truman and Josh Canton. 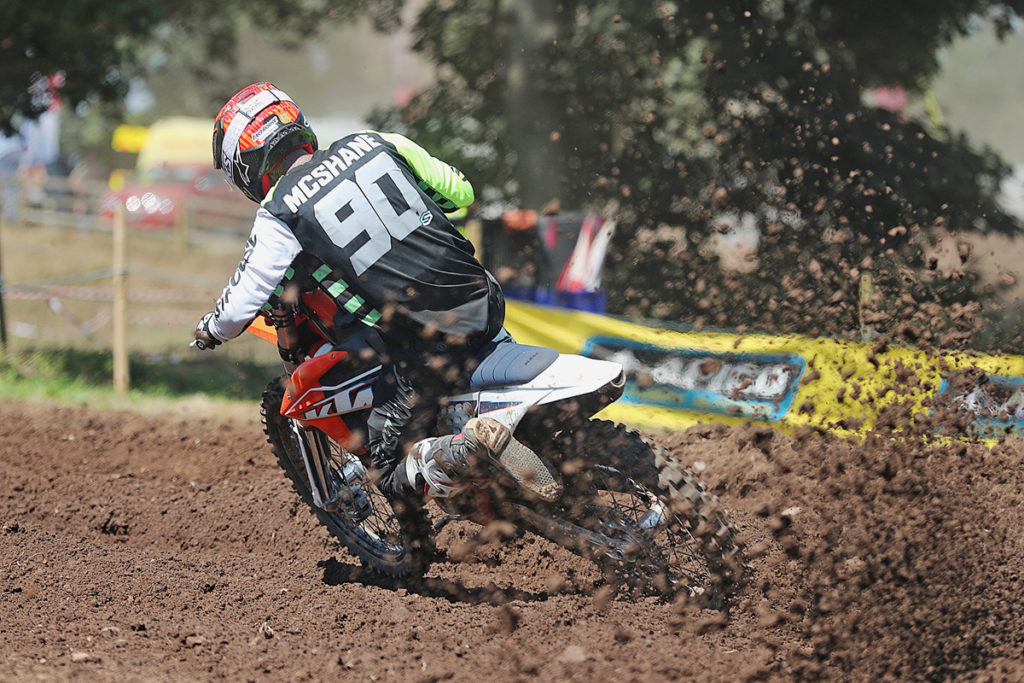 In a runaway battle of the FUS Marsh MX Husqvarna boys, Carless and Bradshaw quickly broke away at the front of the final MX2 moto to indulge in their own private battle. Shane had led the opening four laps before Nev scorched past to take control but two circuits later it was all change again. Struggling with cramp in his leg, Nev was overhauled by Shane and that’s the way it remained as Rowson got home in 3rd. Having his best meeting of the series so far, Coleman took a great 4th with Williams and McShane next up. The MX2 podium was a victory for the experienced riders as Carless, Bradshaw and Rowson took home the awards…

There was some major news before the commencement of Sunday’s 125cc action as the Meredith MX Fantic team announced that series leader Kieran Banks and Jordan Meredith were self-isolating and laid low due to a dose of that horrible Covid infection!. What a shame this was particularly for Banks who has been simply superb in every round so far, get well soon lads! So that meant that there would potentially be a new AMCA 125cc Championship pace-setter come Sunday night but first, they would have to wipe out the big 78 point advantage already fabricated by Banks. 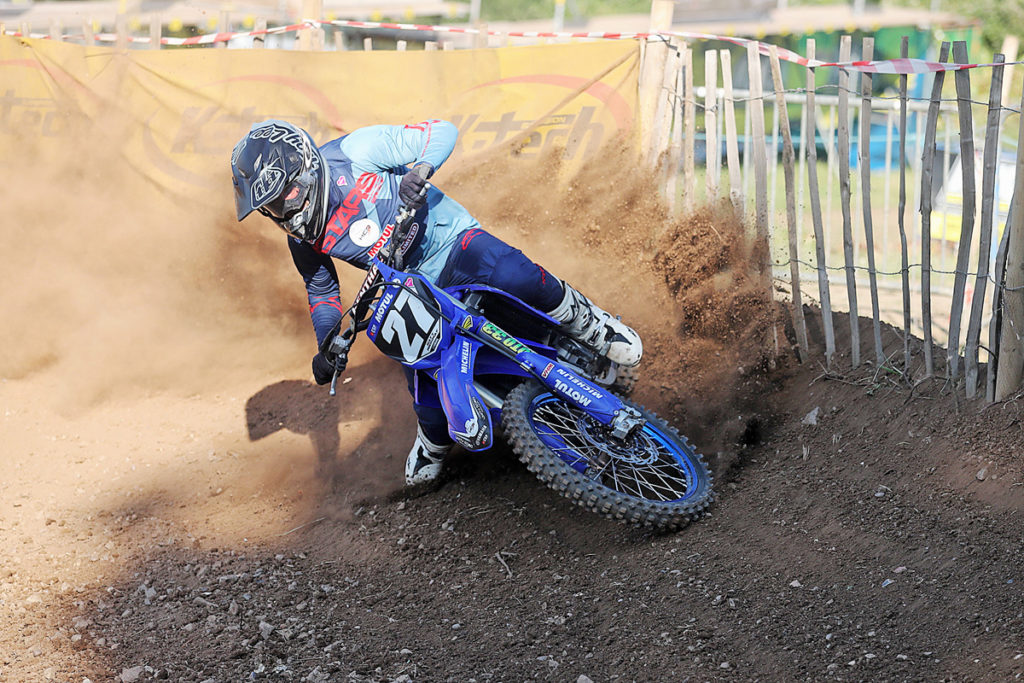 In moto one it was Bradley Tranter, 3rd in the series and still struggling with a shoulder injury sustained during the previous round at Hawkstone who led the way as Lloyd Morgan, 2nd in the series was in trouble and struggling down in 24th place following an excursion into the trackside rope marking. At the front, though Tranter was soon coming under pressure from Matt Ridgway and with just three laps remaining the Hardcore Racing Yamaha made his move and thus bag his first moto win of the series. Taking 3rd was Jordan Wright from Jack Timms, Joel Fisher, Tom Fish and Stuart Owen as Morgan had to settle for 15th. 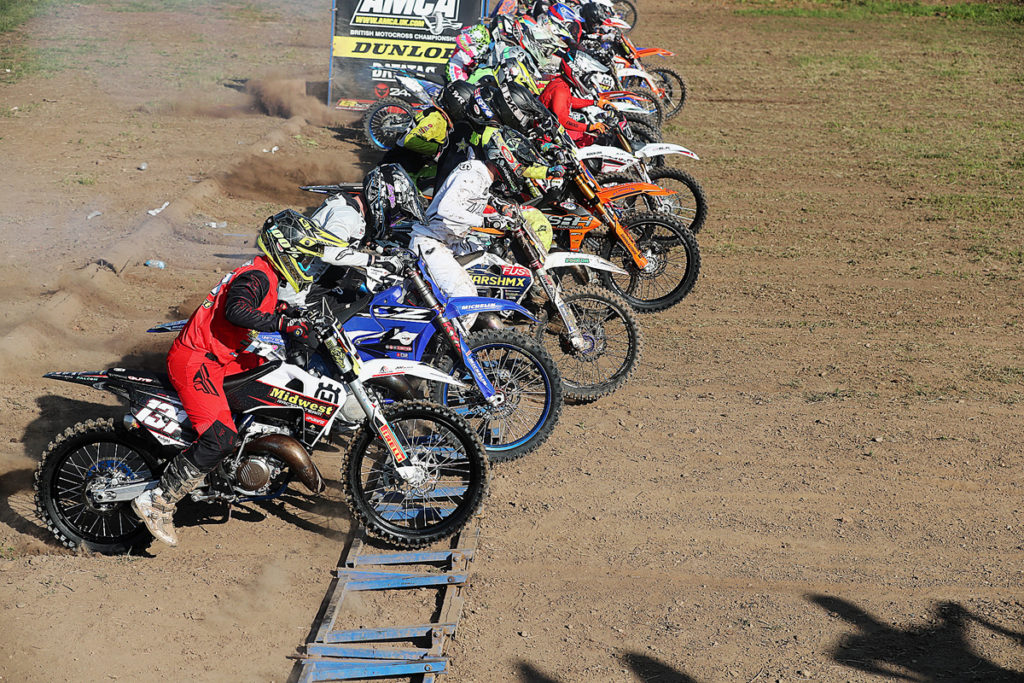 Despite that moto one rope incident, Morgan was to be then involved in an epic 125cc tussle in the second clash of the day. In an amazing three-way battle at the front, Tranter, Timms and finally Morgan took turns to lead. Also joining the party late on was a hard-charging Ridgway. At the flag in this red-hot contest, Timms having his best meeting of the series so far took 2nd with Ridgway passing Tranter on the last lap for 3rd. 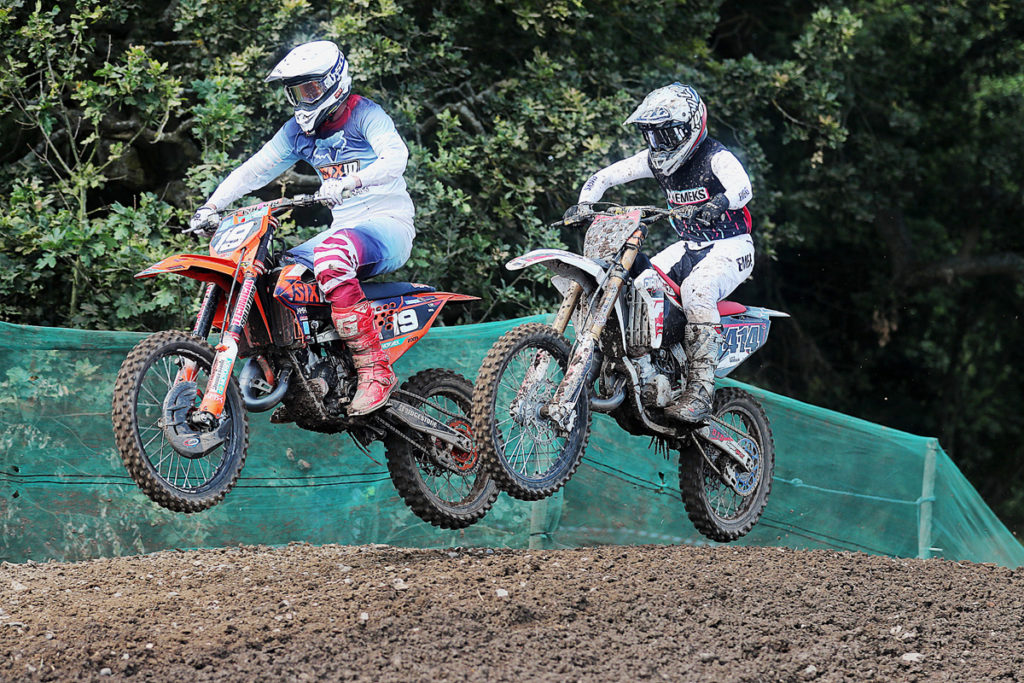 Although Matt Ridgway grabbed the final 125cc holeshot, Tranter then finally Morgan took control of the race leadership. With Morgan getting the win from Tranter and eventual overall winner Ridgway, Fisher, Owen, Clinton Barrs and Tomos Wright who all wrapped the meeting up by producing strong rides. After earlier going 3/5, Wright’s day finished with a puncture when holding an early 4th. Another rider suffering last moto heartache when on course for a potential podium spot was Timms. With his front brake seized on, Jack could only watch the last moto action and must be cursing the misfortune which appears to be stopping any potential progress up the Championship table. So in the Championship battle, it’s now Morgan in control, 8 points clear of Tranter with the absent Banks still 3rd and only 48 points off the top slot. The major mover of the weekend in this series was Matt Ridgway, jumping from 7th up to 4th. 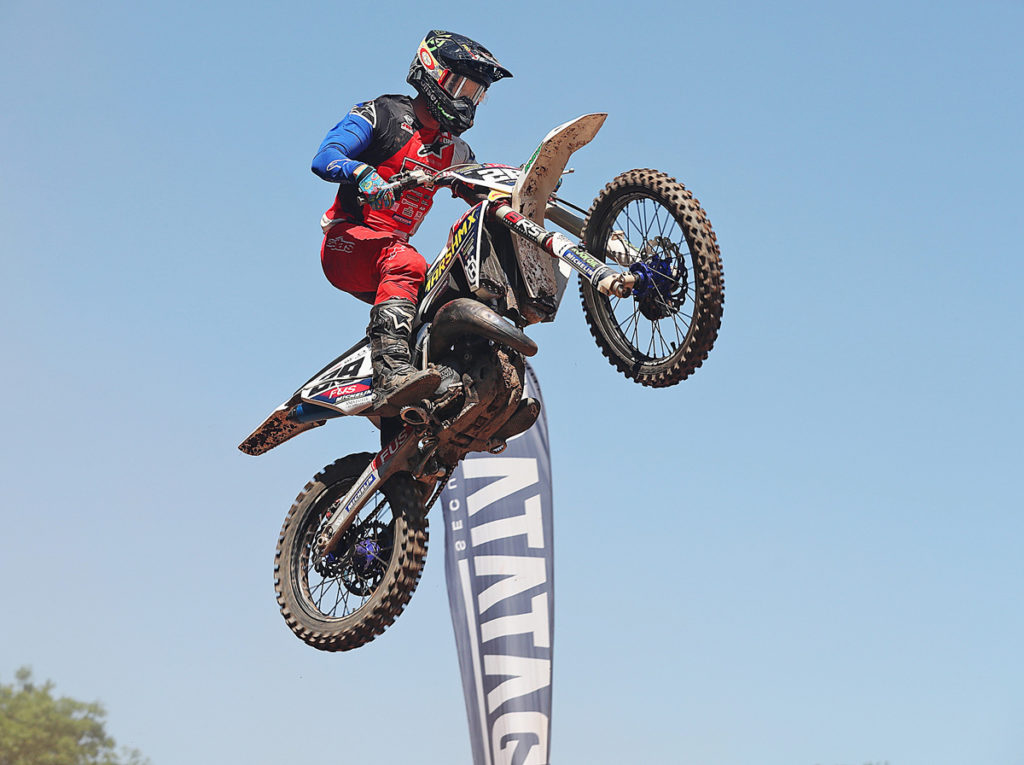 Despite being the first class out on a heavily watered track, the opening Vets moto at Coleorton ran pretty much to form with series leader Phil Mercer controlling all the way from Gary Davies, Paul Burn, Simon Lane, Sean Smith, Andrew Watkins and James Lane. The younger of the Lane brothers certainly had to work hard though for that 7th spot after initially being right down in 26th spot on completion of lap one.

With another gate to flag win in moto two, Mercer put another big 50 Championship points onto his tally as Davies and Burn again chased him home. Having a good ride in this one was Andrew Marchant in 6th whilst Brian Staples and Gareth Dunsford was also inside the top ten. The final Vets clash at Coleorton was to then provide the best of the bunch as Burn, Davies and finally, Mercer led the way. With Mercer victorious, the fast-starting Burn eventually had to settle for 4th as James Lane passed him on the final lap. In the mix again were Simon Lane, Smith, Vets Over 50’s series leader Watkins, Staples and Dunsford who all bagged some very nice points hauls… 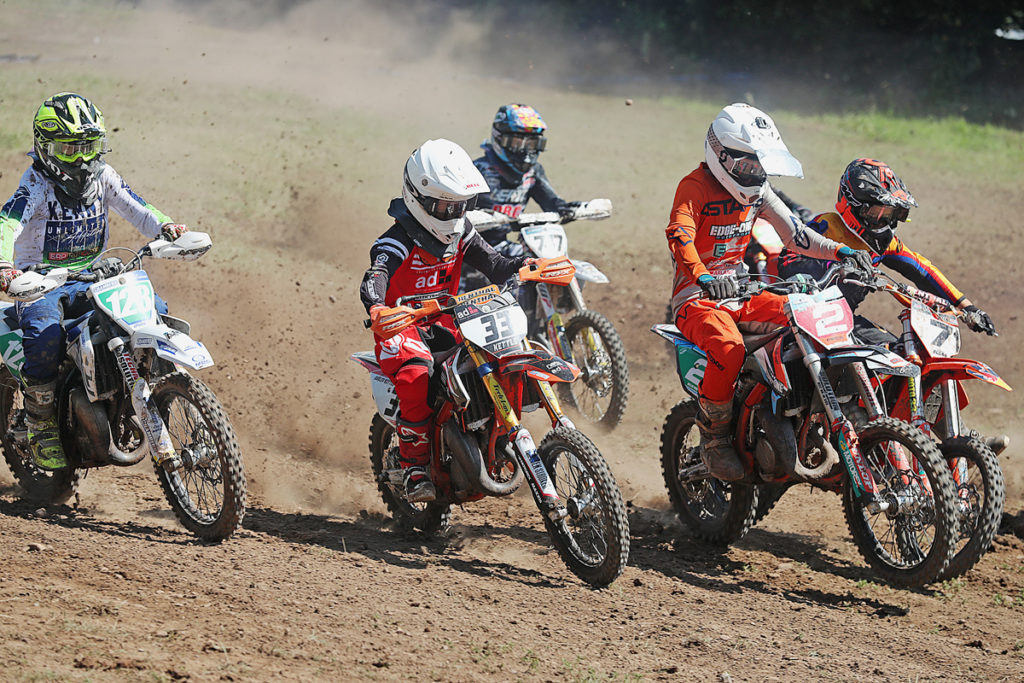 Once again it was a case of the current Championship top two dominating the Youth 85cc class as Charlie Hucklebridge and Oliver Rigby controlled the Coleorton racing. Going 1/2/1, Hucklebridge was to take the overall win on the day from series leader Rigby as Tyler Smith joined them on the podium. In the opening clash, Hucklebridge led all the way from Rigby as Smith won a super race-long tussle for 3rd ahead of Logan Jay-Powell, Will Turner and Linc Hasted. 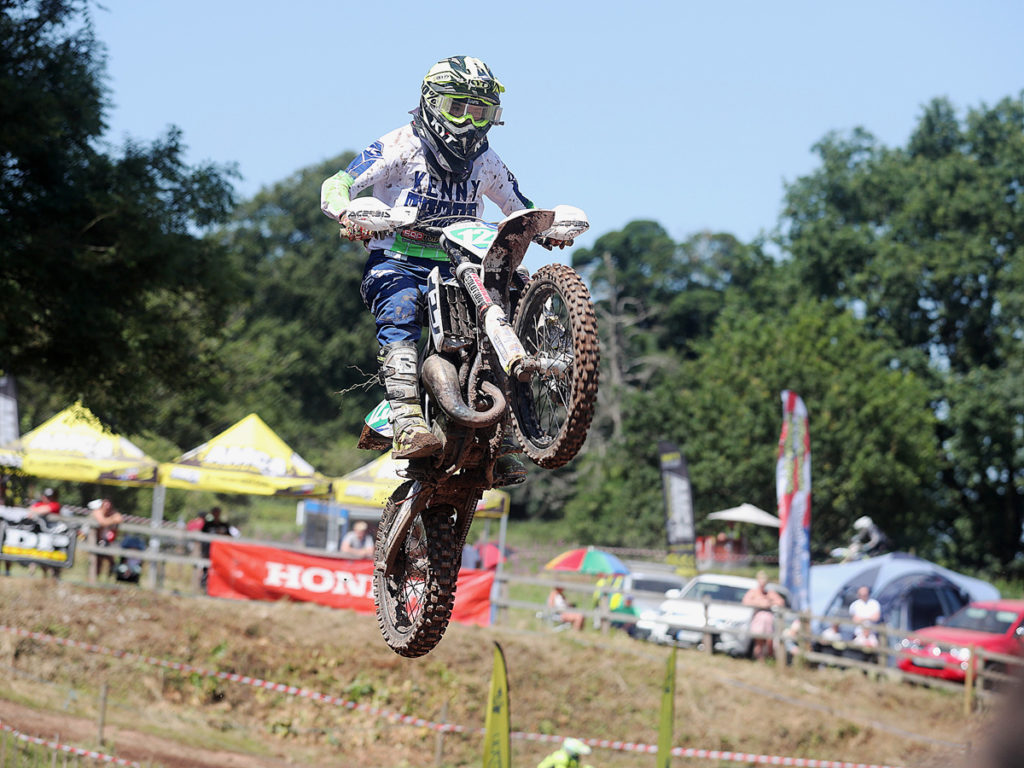 Moto two and it was Rigby all the way from Hucklebridge, Turner, Hasted, Smith and Jack Evans. So with one apiece for Hucklebridge and Rigby it meant a last race decider for the Coleorton overall verdict, an honour which was to go eventually to Hucklebridge. Initially, though Rigby had claimed the holeshot but two laps in his Wiltshire based title rival found a way through and there he remained as Smith got home in 3rd. In the separately scored SW85cc contest, Harley Prickett took the top slot from Oakley Kettle and Harrison Davies and now also leads the Championship race by just a single point better off than Kettle. 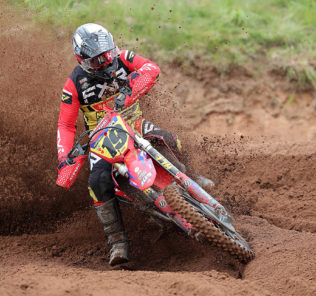 Back in the spotlight! 2021 AMCA British Motocross Championship Round 2 – Preview
Read More 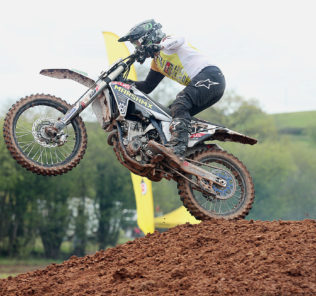 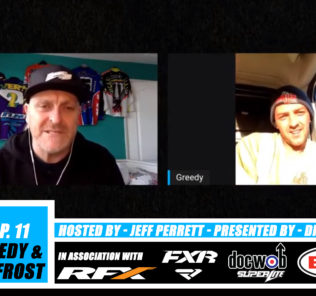 MXGP locked and loaded for Loket – Preview
Be Social…