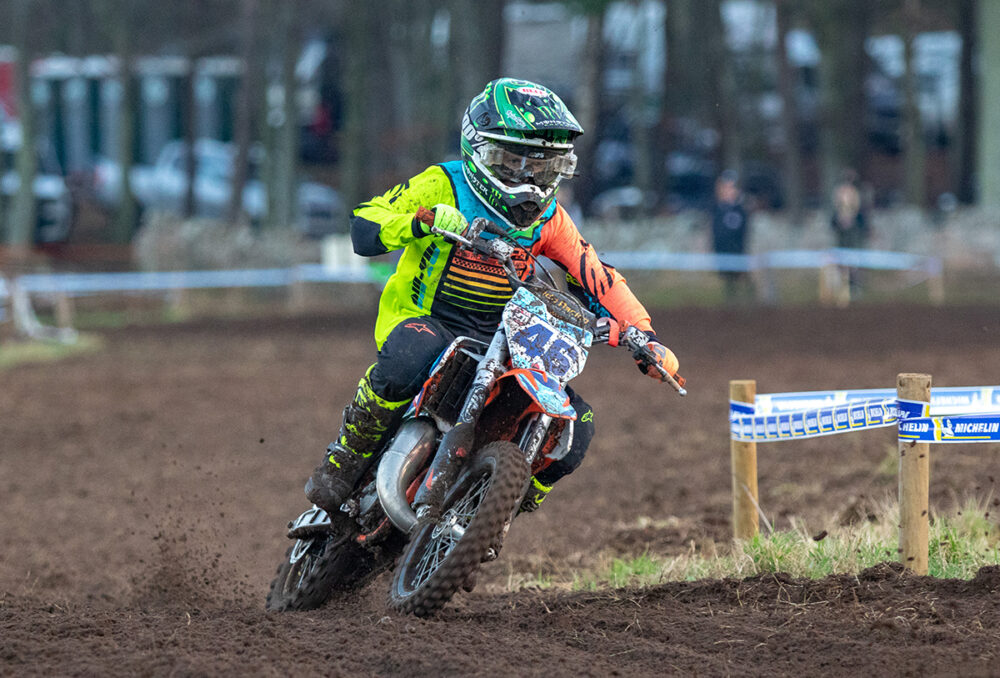 The Ecosse XC club enjoyed chilly, but bright weather conditions for the second of its three-round SACU Winter MX series at Tyninghame Links in the northeast of Scotland last Sunday.

Over 200 riders prepared to tackle the deep-sand track that was largely dry, but had patches of wet sand to keep the riders challenged and focused. 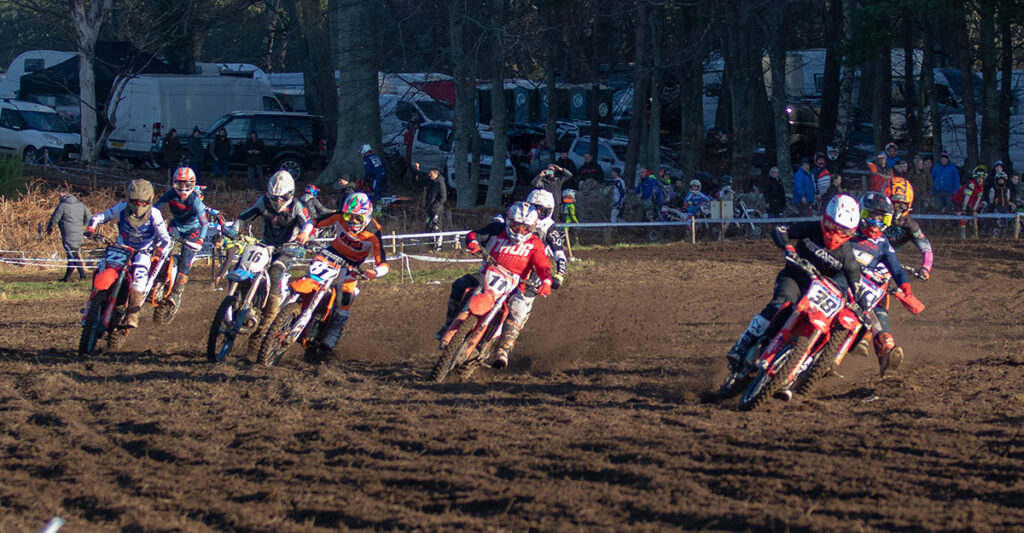 Consistency was the order of the day in the A group with the top four riders each finishing in the same position in all three motos. Daniel Hutchinson was victorious with three wins from three starts and a clean sheet. Logan Wilcox finished second in every race, Jamie Fort took three third place finishes and Euan McConnel bagged a full set of fourth positions. Logan Ferguson and Colin McLuckie rounded out the top six with Ferguson finishing sixth, fifth and fifth. McLuckie got the better of Ferguson in race one to take fifth, sixth and sixth. 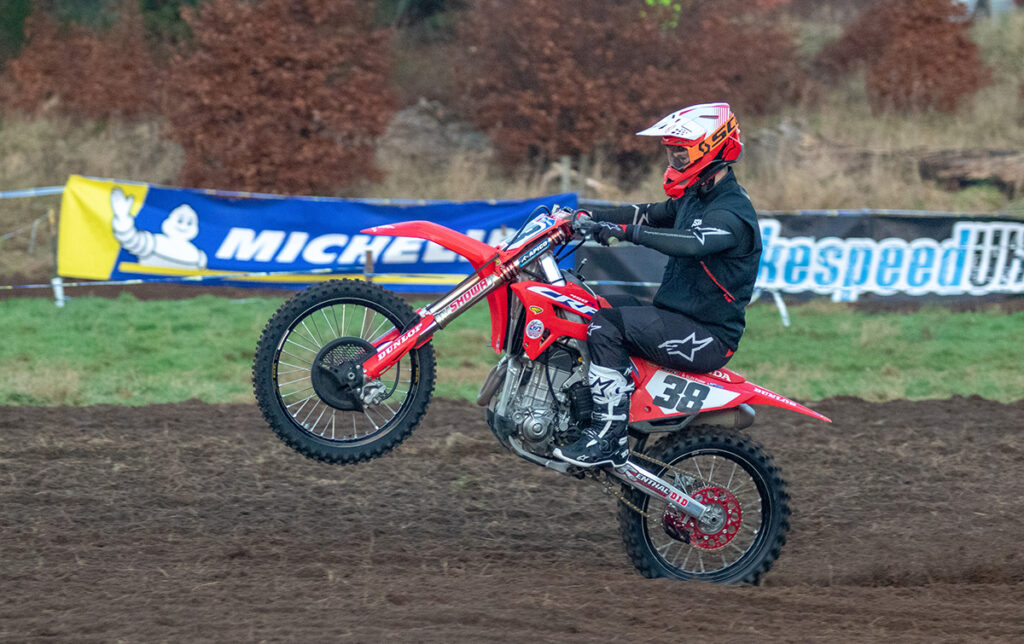 Daniel Hutchinson bagged a full set of A class wins

Austin Mowbray was a new name at the top of the B class leaderboard, improving his ninth place at the opening round to a round two overall win. He won the first race ahead of Ivan Williamson and Lewis Rollo with Ryan Gerrard, Robert Smith and Sam Lyons-Carr taking fourth, fifth and sixth. The roles were reversed in the second race when Williamson took a flag-to-flag win, Mowbray was second and Mark Glegg third. Josh Spibey and Tony Makepeace were next up, and Rollo recovered from a bad start to secure sixth. Mowbray was back out front in the final moto, leading from the gate. Williamson passed Rollo in the early stages to finish second, followed by Rollo, Spibey, Liam McIntyre and Makepeace. 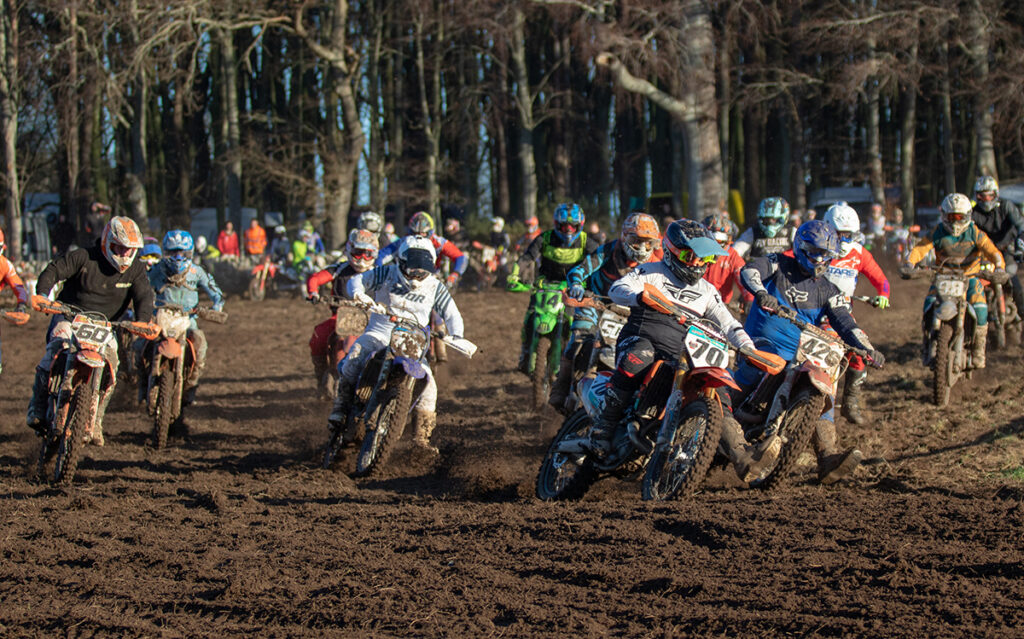 A huge turnout saw 40 riders on the line for the C Group. The winning was split between Michael McLarty, Michael Brewis – who had a busy day also contesting and winning the Quad class – and overall victor Martyn Lyell. McLarty, Stuart Wilson, Lyell, Brewis, William Anderson and Scott Foote were the top six finishers in the first race. Brewis transferred his winning ways from four to two wheels by taking the second race win in front of Lyell and McLarty, Wilson, Foote and Logan Adsley. In the third race, Wilson looked to be favorite for the win but Lyell passed him with just over a lap to go. McLarty and Foote held their starting positions for the duration of the five laps. Brewis finished a credible fifth and Adsley sixth.

Vet rider Chris Muir showed the Rookies his rear wheel in all three combined Rookie/Vets races with start to chequered flag wins in the second and third races. Young Ayden Smith followed him home in each moto. Reece Jones posted the fastest lap of the group, in the first race, with a time of 2:09.607, he scooped two thirds and a fourth with Vet riders Michael Graham and Gordon Morrison behind him in race one, while Jack Fletcher finished sixth. In the next race, Morrison, Charlie Henderson and Carl Harris followed Jones home. The third race saw Graham in third ahead of a trio of hard-charging Rookies in the form of Jones, Henderson and Fletcher – all working their way through the field. 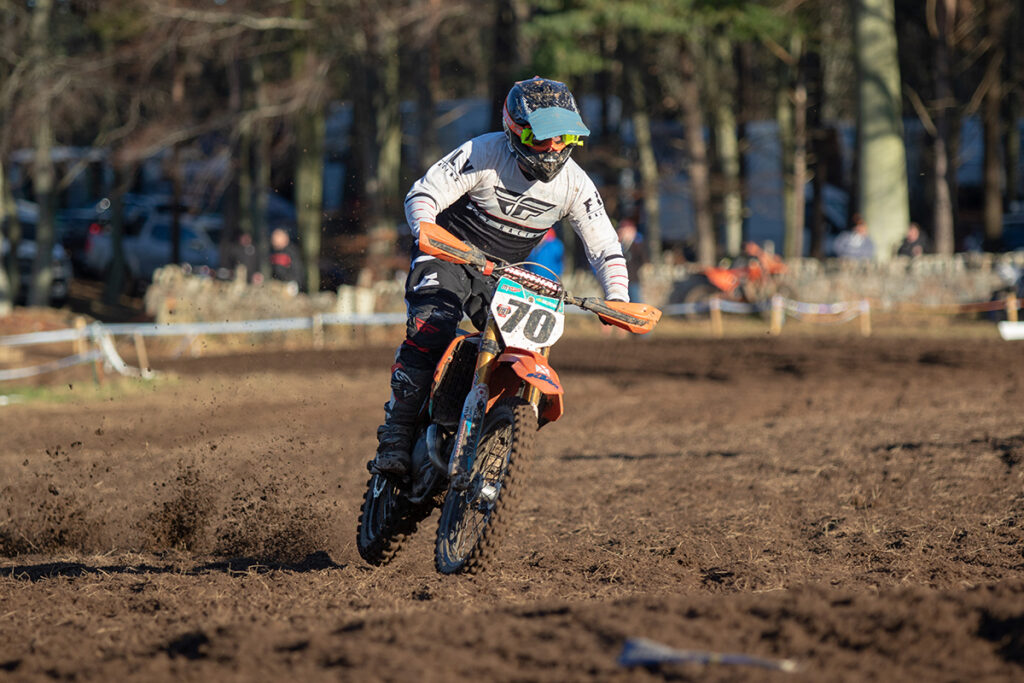 The Big-wheel and Small-wheel 85s also ran together. Jake Walker and the first round winner Ryan Waggot worked hard out front to finish first and second overall. Jack Brearey was third. Waggot won the first race with Brearey in his wake and Walker third. Rhys was a steady fourth, with Zac Cheel and Ebony Brown next to cross the line. Hayden Statt won the small-wheel class and took eighth overall. Walker was in the wining saddle for the second moto and Waggot, the runner-up. Brearey and Whyment took third and fourth while small-wheelers Statt and Lucas Lee were on fine form in fifth and sixth. Walker again secured the win in race three with Waggot, Brearey and Whyment following. Statt took his third small-wheel win of the day with a fifth place on track. Big-wheel rider Charlie MacDonald completed the top six. 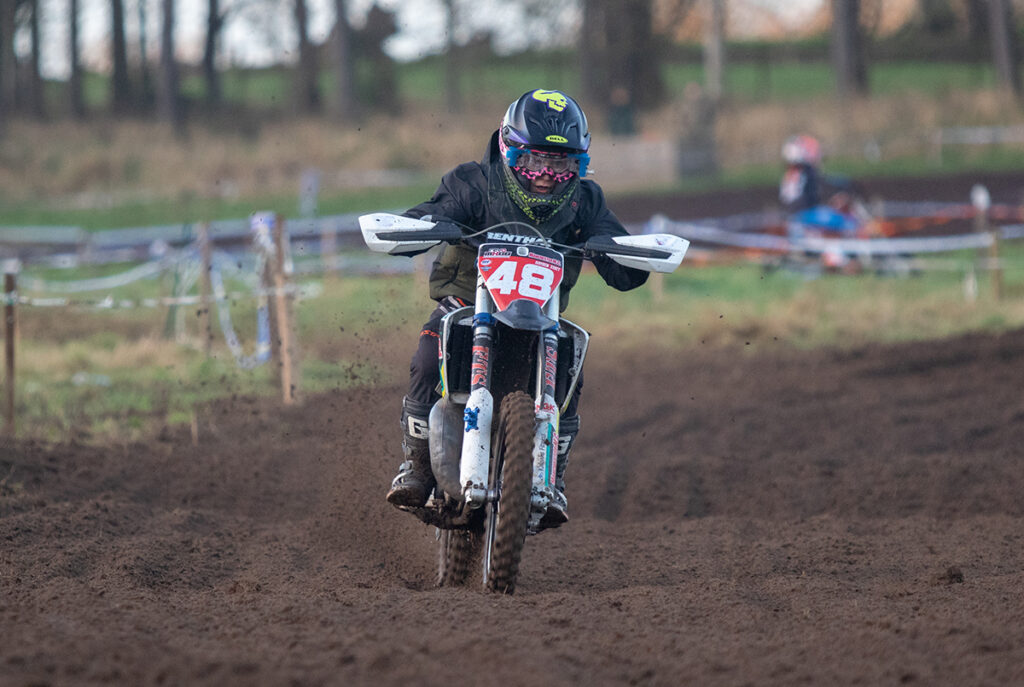 In the youngest group of the day, Harry Hall picked himself up from a fourth in the first race – in which he posted the fastest lap time – to take the next two 65cc wins. Overall runner up George Dryden won race one and then posted a second and fifth. Jay J Cooper finished ninth, fourth and ended the day with a creditable second, to finish third on the day. Brooklyn Tinkler was ninth first time out but went on to grab a podium finish in the second and fourth in the third to take fourth overall. Alan Thomson steadily bettered his positions by moving up from sixth to sixth and finishing off with a third. On his way to taking sixth overall, Liam Everard started out as runner-up, then eighth and seventh. 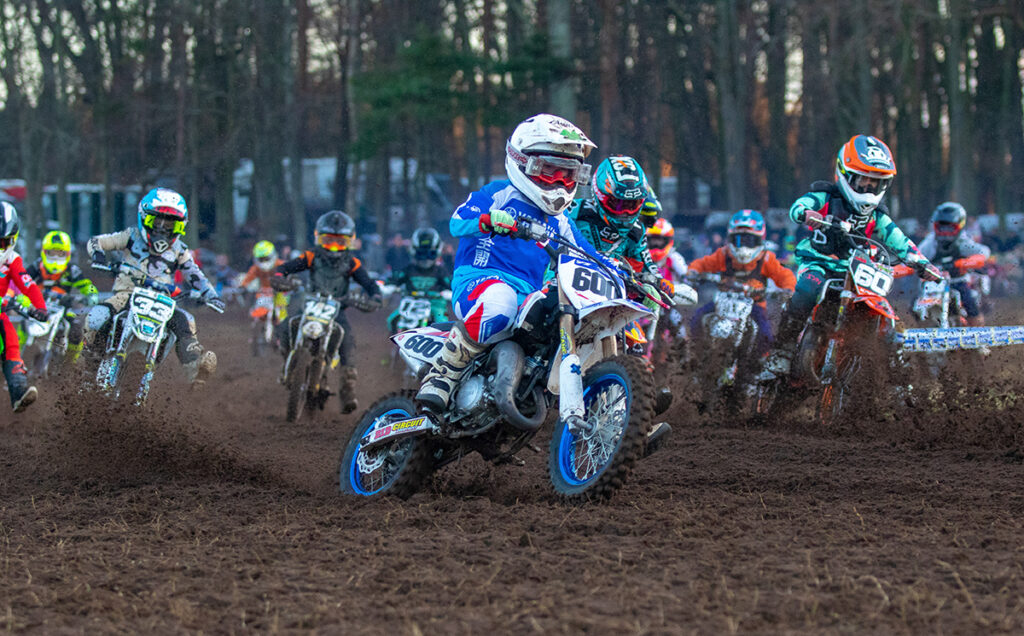 65cc group charge off the line

Round 3 of the Michelin Rock Oil BikespeedUK SACU Ecosse XC Winter MX will return to Tyninghame on the 13th of February 2022. 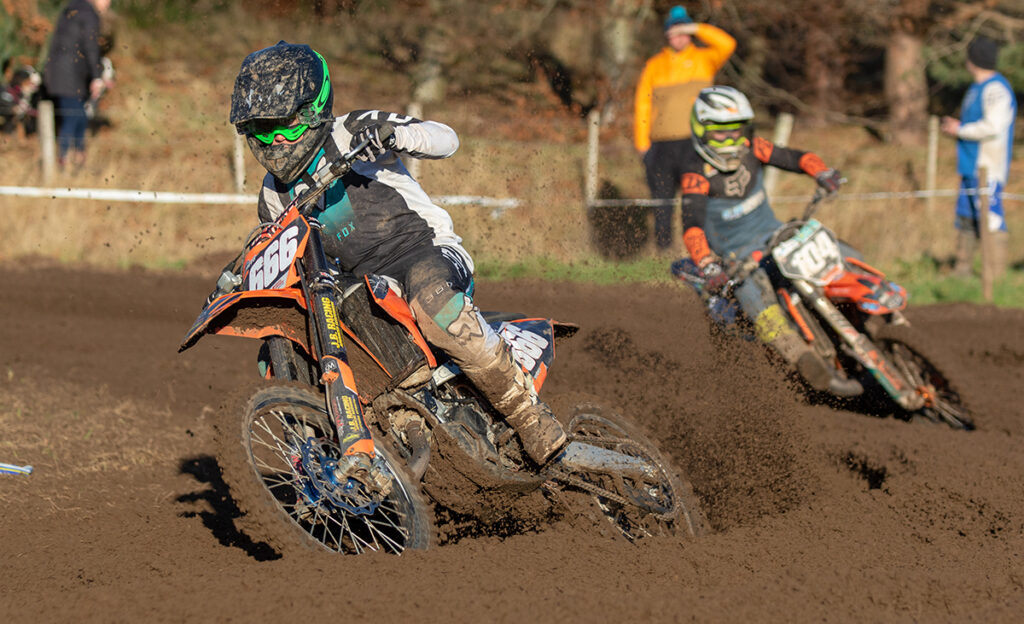 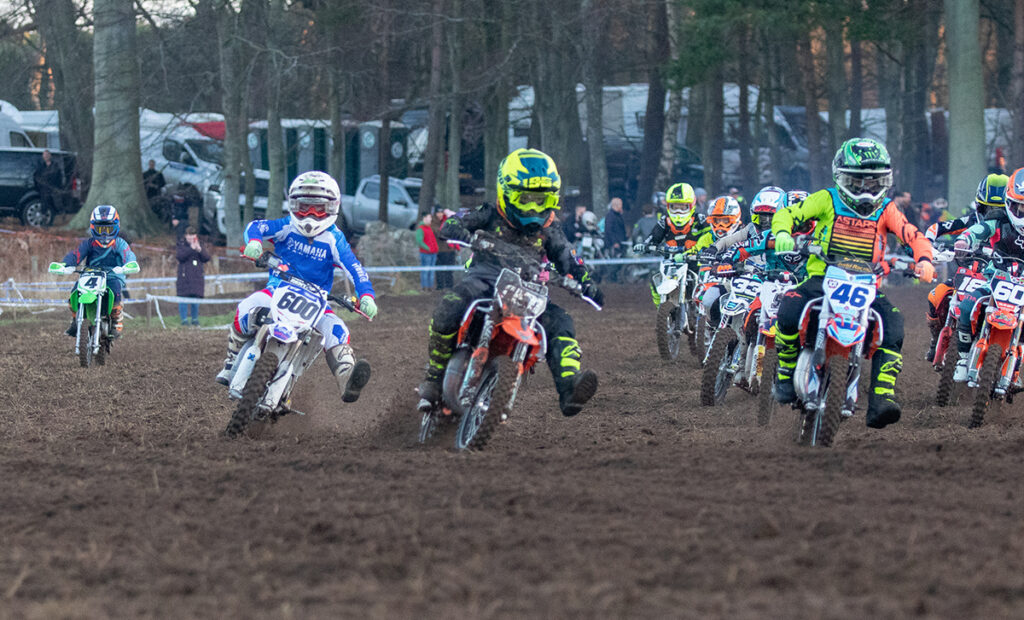 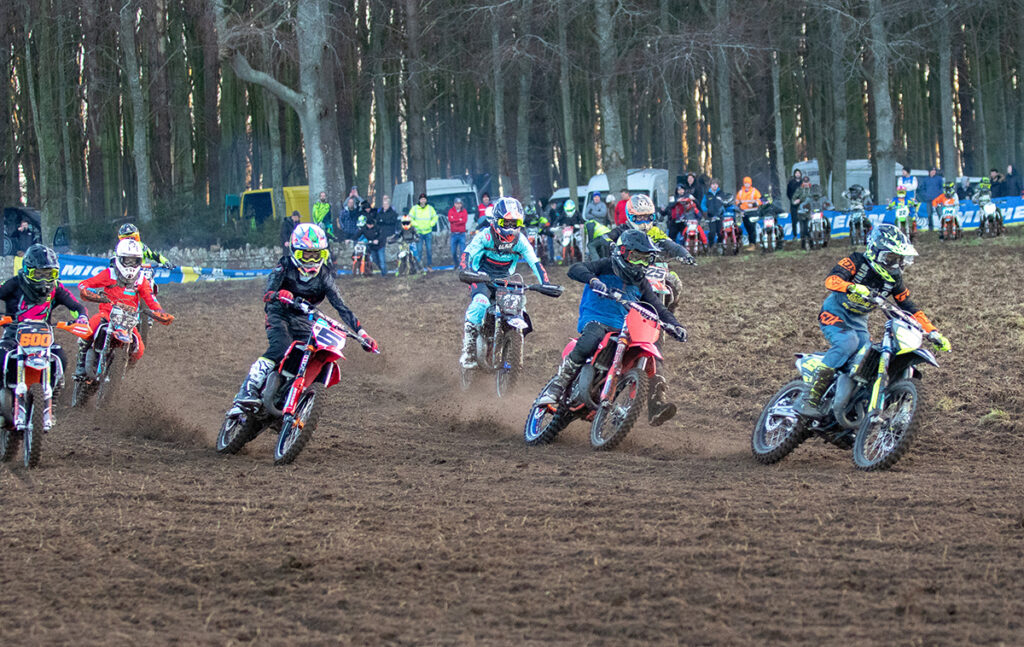 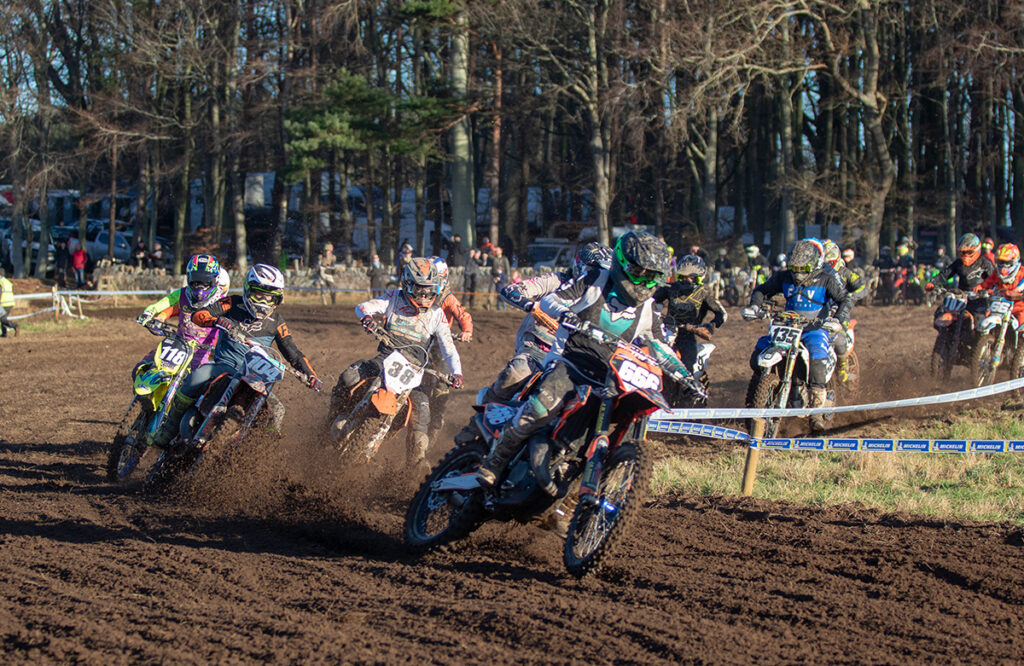 Rookie victor Ayden Smith on his way to three wins 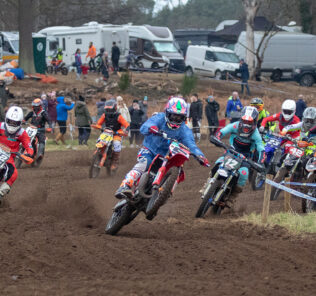 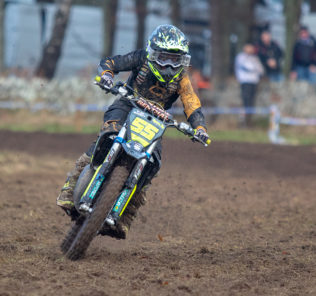 Apico Factory Racing back the MX Nationals ‘Experts’
Next