British Flat Track racer Oliver Brindley needs the support of the Off Road community as he faces a long road to recovery following a crash in the final race of the 2019 American Flat Track series, the Meadowlands Mile, which was contested on Saturday, September 28 at Meadowlands Sports Complex in East Rutherford, New Jersey.

The sports and entertainment complex lies directly across the Hudson River from New York City. The Empire State Building and other Manhattan skyline landmarks are visible on the horizon beyond the race track.

Report and Images by Tom Stein

Popular British racer Brindley crashed his Yamaha during an AFT Singles qualifying race. Sixteen-year-old Rookie of the Year Dallas Daniels was reported to have fallen when his Yamaha hit a bump on the track in the second turn. Daniels’ crash also took down Red Bull KTM rider Shayna Texter, a former class champion. Brindley ran into the pair and was catapulted into the air. The impact caused Brindley to receive a severe head injury. He was transported from the scene by ambulance for treatment at a local hospital. Daniels and Texter received minimal injuries and were able to remount. Brindley remains in an induced coma while doctors allow swelling to subside before they can determine the full extent of his injuries and create a plan for treatment.

Brindley’s family have joined him in the USA. Several benefits have been established to assist with expenses. The primary source of assistance is the Rookies of ’79 and Friends charity. More information is available on their website and Facebook page, as well as at the Oliver Brindley Racing Facebook page. Status updates are also provided regularly on the Northwest Track Shots facebook page.

There is also a Just Giving page  https://www.justgiving.com/crowdfunding/oliver-brindley

It has been just under four days since Oliver had his accident at Meadowlands NJ during the semi final of the 2019 AFT season finale race.

The most critical issue being dealt with by the medical teams is a serious head injury he has suffered and he remains unconscious at this time. Some other injuries sustained are not considered to be on the critical recovery path.

There is some positivity for us in that his body is strong and he is showing good signs of trying to hold his own at this stage of the healing and recovery process.

The medical team have indicated that they do not expect to see any further improvements now for another week so please be patient in waiting for further updates.

As a family we would like to thank all of you for the overwhelming volume of support, love, kindness, prayers and positive thoughts from all around the world. This shows to us how special our boy has become to you all as a result of his own actions and approach to life.

Please keep up the positive thoughts and prayers for Oliver and all the other injured riders at this time.

Meadowlands is a mile long horse track, surfaced with fine black gravel. On this day, the surface in turns one and two was very unstable. The formation of ruts and random hard and soft spots made it very difficult for the riders to pick a consistent line through the turns. The event was delayed for more then three hours at mid-day as workers used heavy equipment to scrape away several inches of the loose surface to expose the hard base below. The result of the extensive track work was only minimally successful. and the event was left far off schedule.

In order to keep the event moving along, some practice and qualifying sessions were eliminated. Main events for the AFT Singles and AFT Production Twins Classes were reduced from fifteen laps to twelve laps. The premier AFT Twins final that was originally scheduled for twenty-five laps was run as an eight lap sprint. 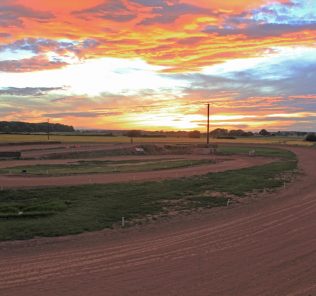