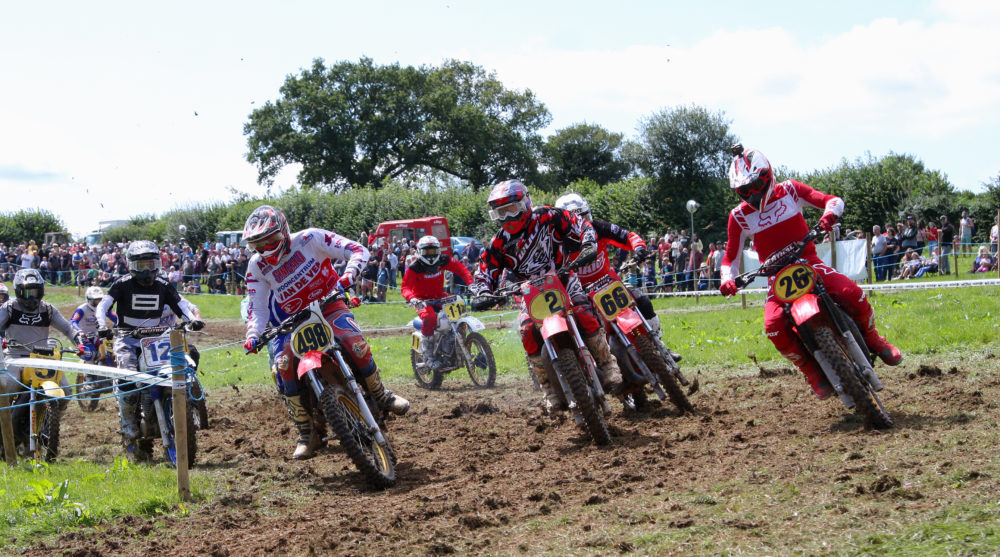 Back over the weekend of 21st & 22nd August the Somerset Scramble Club held the Badger Goss Memorial Scramble at a new venue at Cotley Nr Chard and what a track it was as every effort had been put in to make it a weekend to remember and spectators were there on both days in numbers to show what a gentleman, friend and Legend Bryan was not just in the sport he loved but as a person in general and a minute of hand-clapping was held on both days as a mark of respect.

Saturday was mainly a day for Classic bikes with a mixed class, plus Under 50’s and Over 50’s Twinshocks.

In the Pre 65 up to 350cc class, it was the 200cc Sprite Tiger cub of Terence Fox who was triumphant in all three races whereas in the Pre 65 Over 350cc there was also a clean sweep of wins for Nicholas Thorne on his 500cc MRD Harris Jawa.

In the Pre 74 Under 250cc class, it was Andy Burgess who won the opening two races, but Andy was a nonstarter in the last race which was won by Andy White who scored heavily in the first two races which was to give him a well-deserved overall. The Pre 74 Over 250’s saw Steven Thorne on the 441 BSA Vic/Metisse win the opening encounter from Steve Adams, but it was Adams who won the other races and with it claimed the overall.

In the Twinshock Under 50’s class, there was a fine display of riding from Scott Faulkner on his 490 YZ Yamaha who took all three race wins whereas in the Over 50’s class it was Jon Wood who won the opening two races to give him the overall, but he was denied a hattrick of wins in the last moto by Shaun Church on his 560 KTM.

A rider of the day award was given to Louis Harmer who finished third overall on his 490 Maico in the Under 50’s Twinshocks.
Sunday began a bit different as a lot of rain had fallen overnight and things were a bit slippery and muddy for practice but as the day progressed the track was to dry and with it produced some good racing with classes for Under 40 and Over 40 evos which was a Championship round plus four groups of Twinshocks. 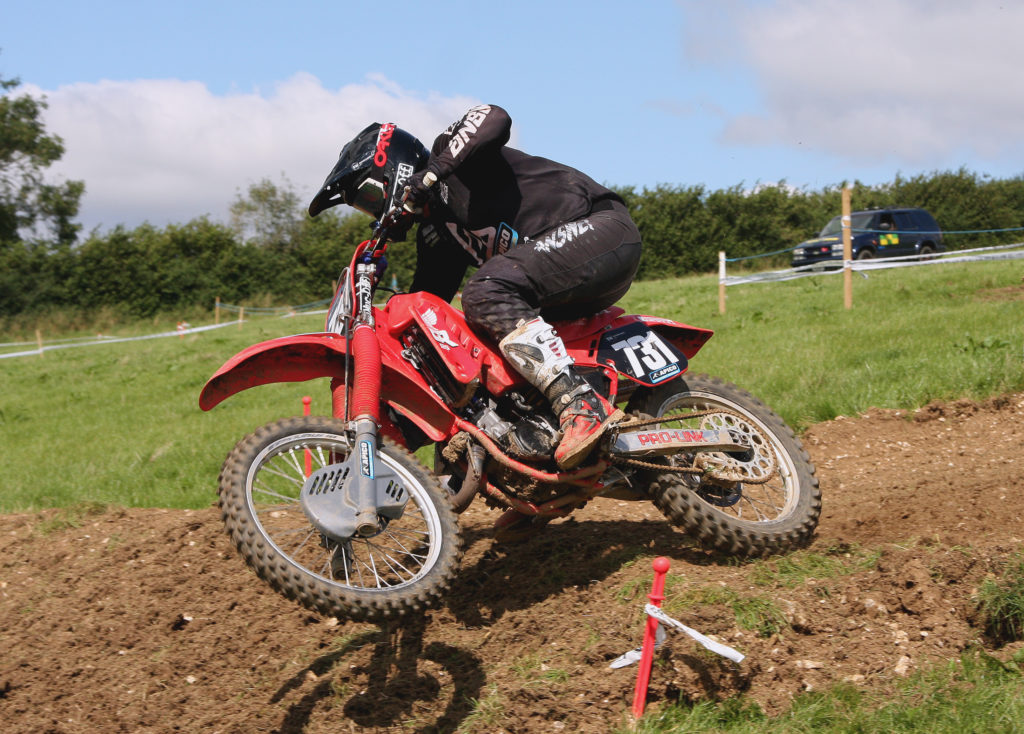 In the Under 40’s Evo’s there was a surprise entry from Jake Shipton who said he was out for a bit of fun on a CR125, and he looked pretty quick in practice. The opening race saw a flyer out of the gate for the YZ250 Yamaha of Ben Milward, but Ben had a bit too much speed going into the second corner and went down when his front wheel washed out and he was to rejoin nigh on last. Tyler Green inherited the lead which was short-lived as Shipton soon found away pass and took over at the helm and was soon to ease away from Green. Milward was a man on a mission and was soon into the top ten and still moving up through the field and was to catch and pass Green on the penultimate lap and was soon closing in on Shipton, but the Chequered flag was to come to Shipton’s rescue as he took the win from Milward a close second. In the second encounter there was no stopping Milward who took the win by some margin from Shipton with James Samson this time taking a distant third. Milward again took the chequered flag in the last race but was pushed by Shipton in this one with just two seconds separating them with Green finishing in third. 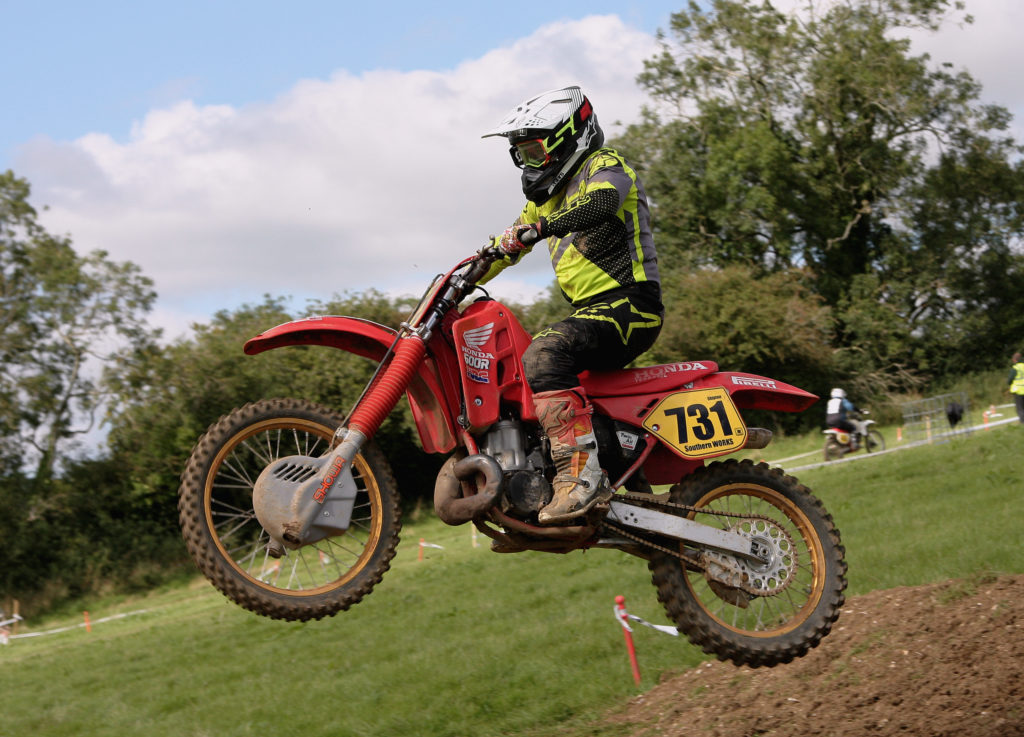 The Over 40’s Evo’s saw yet another Shipton at the front in the opening race in the shape of David Shipton (Jakes Dad) on his CR500 who led for the first lap before losing out to both Phil Lewis on the RM250 and the CR250 of Steve Locke. Locke and Lewis were to ease away with Lewis taking the win by seven seconds with Shipton putting in a late surge to be literally less than a second behind Locke at the line taking a close third. Lewis once he hit the front in the second race was unstoppable and took a comfortable win from Locke with Kevin Edwards taking third in this one, but in the last race it was a battle royal between Lewis and Locke especially on the last lap with Lewis having to use all his experience to hold off Locke which he did but only just as it was three-hundredths of a second between them on the line.

In the Twinshock A class, it was Ed Spear on the 540 Yamaha who had the best start in the opening race from the 490 Maico of Wayne Butt and Terry House on the Fasthouse 490 Maico who were both to get past Spear by the end of the opening lap and were soon to start to get away with House all over Butt looking to take the lead which he eventually did but Butt stayed with him until he was to slow up when his bike was to lack power which was to let House ease away from yet another 490 Maico with Tom Paulley onboard who was now in second. House was to stretch out a fair lead until 3 laps from the end when he was to stop which he thought was the chain had come off, but it was simply he had missed a gear and through came Paulley with House re-joining in second who was soon to regain the lead passing Paulley on the same lap and went on to take the win. 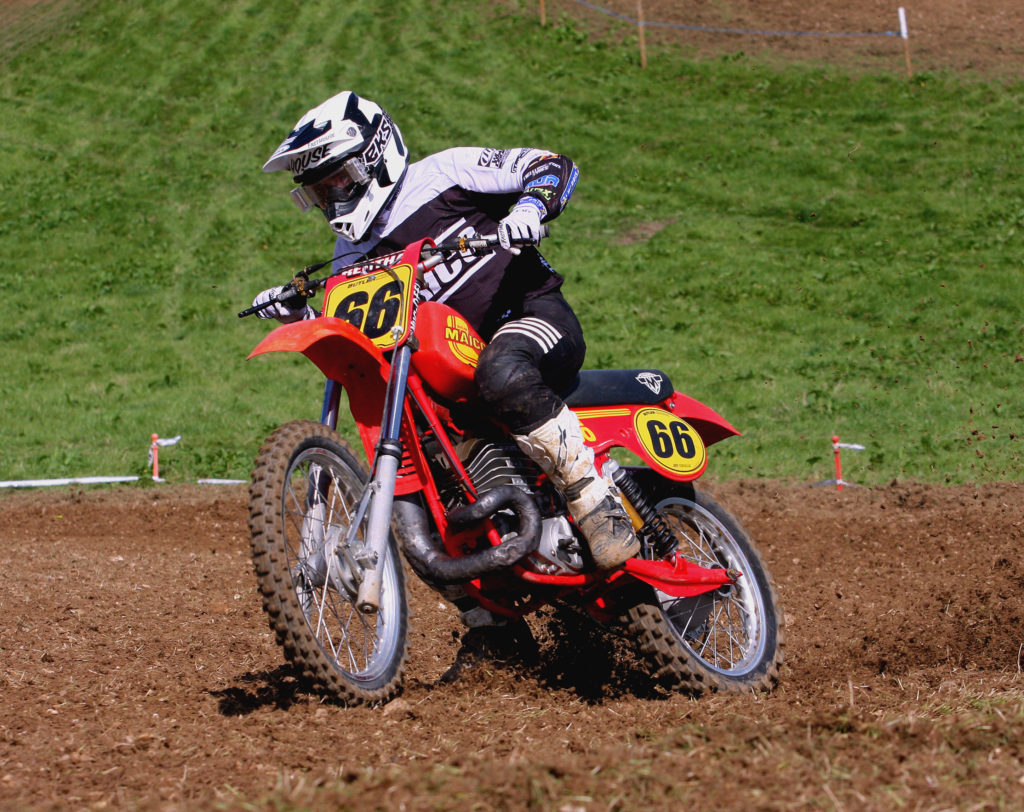 In the second moto, it was the 500 Husky of Bryan Withers with the best start from Butt with House tucked in third, but it wasn’t long before House passed both Butt and Withers and took over at the front and with a clear track in front, he was to take a convincing win from Withers as Butt again had a problem which dropped him back down the field and it was Paulley who took third. In the last moto again, it was Withers who had the early lead from House with Butt this time in third and it was Butt who was in a real hurry as he soon passed both House and Withers and looked good at the front. House got past Withers on lap 2 and was soon to close the gap on Butt who was soon to have House breathing down his neck. House got past Butt a lap later and was to set off into the distance and made it a clean sweep of wins with Butt second, with Withers who had been in a long hard battle on the last lap just pipping Paulley taking third. 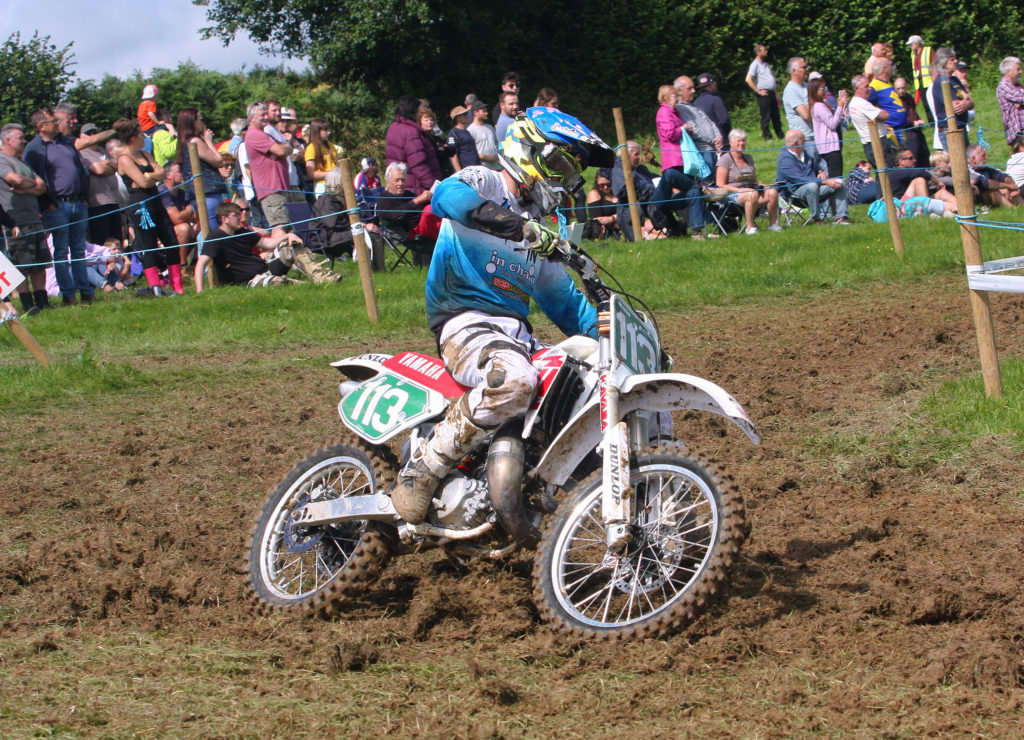 Ben Milward took the overall in the Evo Under 40’s

In the Twinshock B class, it proved a good day for the 560 Ktm of Shaun Church who won the opening race but was beaten by Kurtis Bence in the second encounter with Matthew Holcombe denying Church in the last one, but it was Church who took the overall with a win and two seconds.

Dan Ridge was in fine form in the Twinshock C class winning all three races but was pushed hard in the opening race by Geoff Wiltshire and had to hold off Adam Tabrett on his 560 Ktm in the other two races.

Twinshock D saw John Weeks take a hattrick of wins beating Robert Coleman in the opening race then holding off Louis Butt in the second and third races. 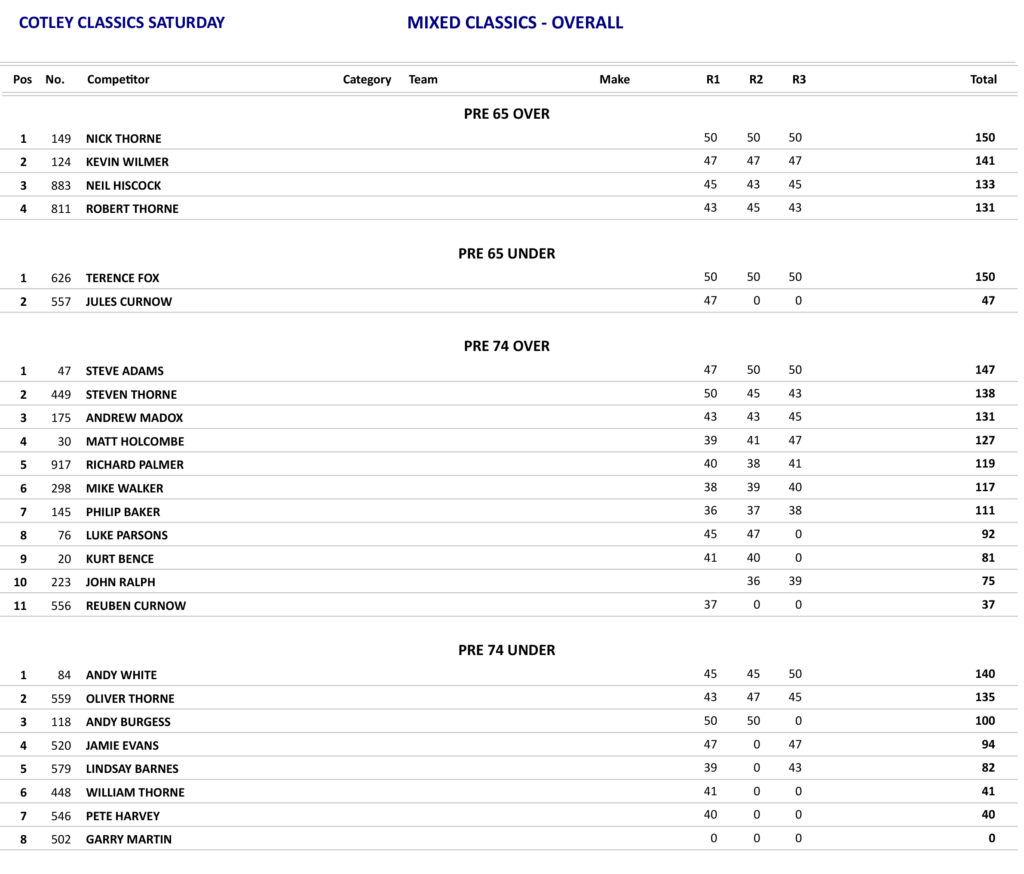 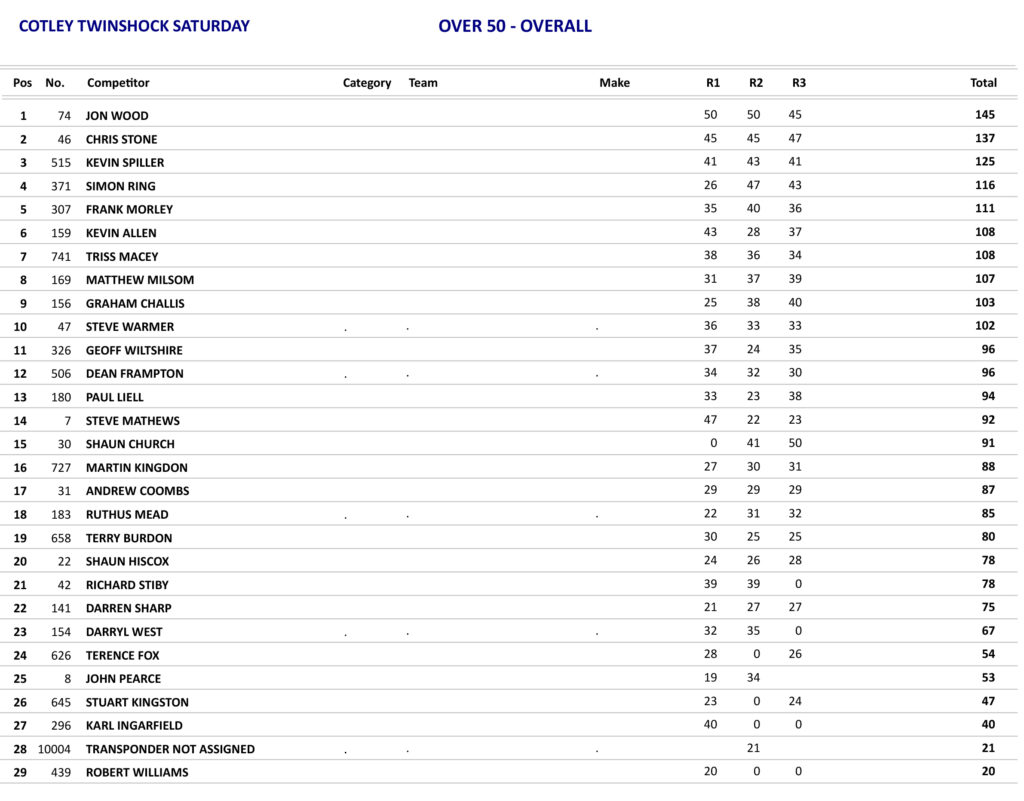 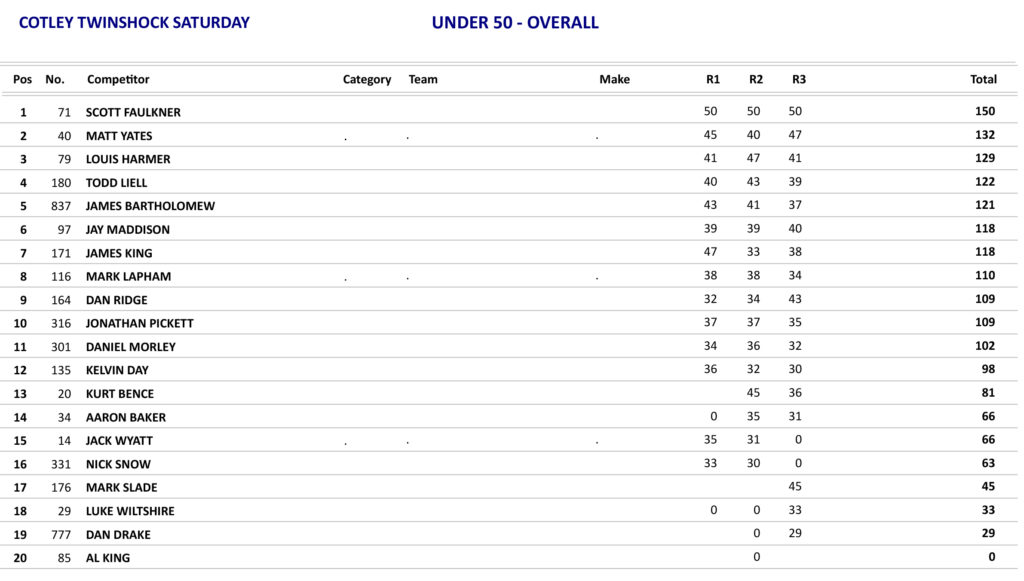 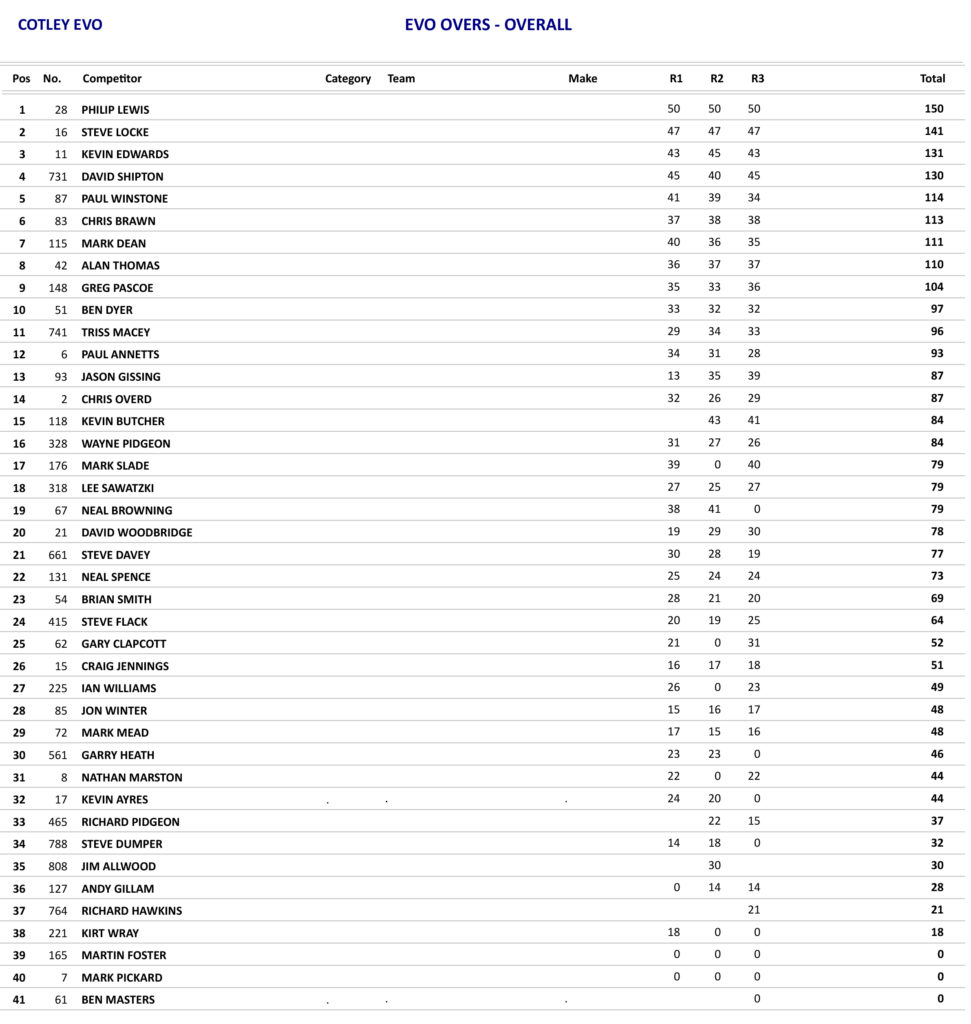 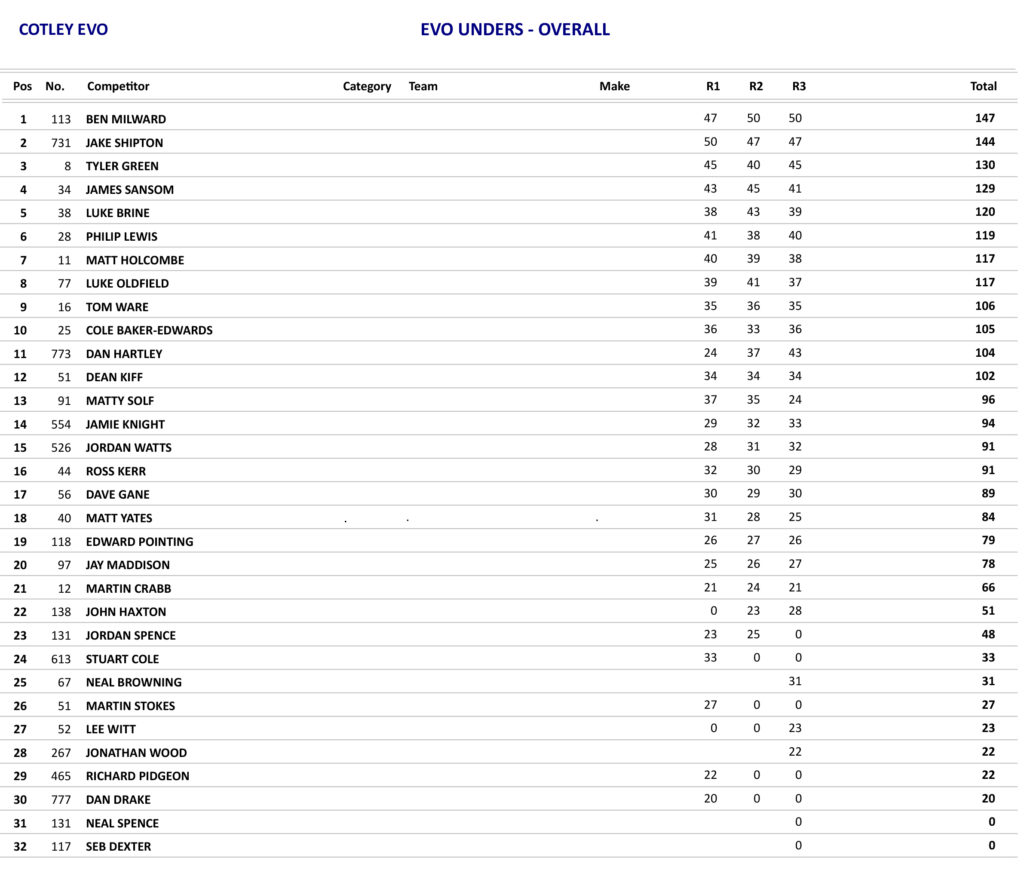 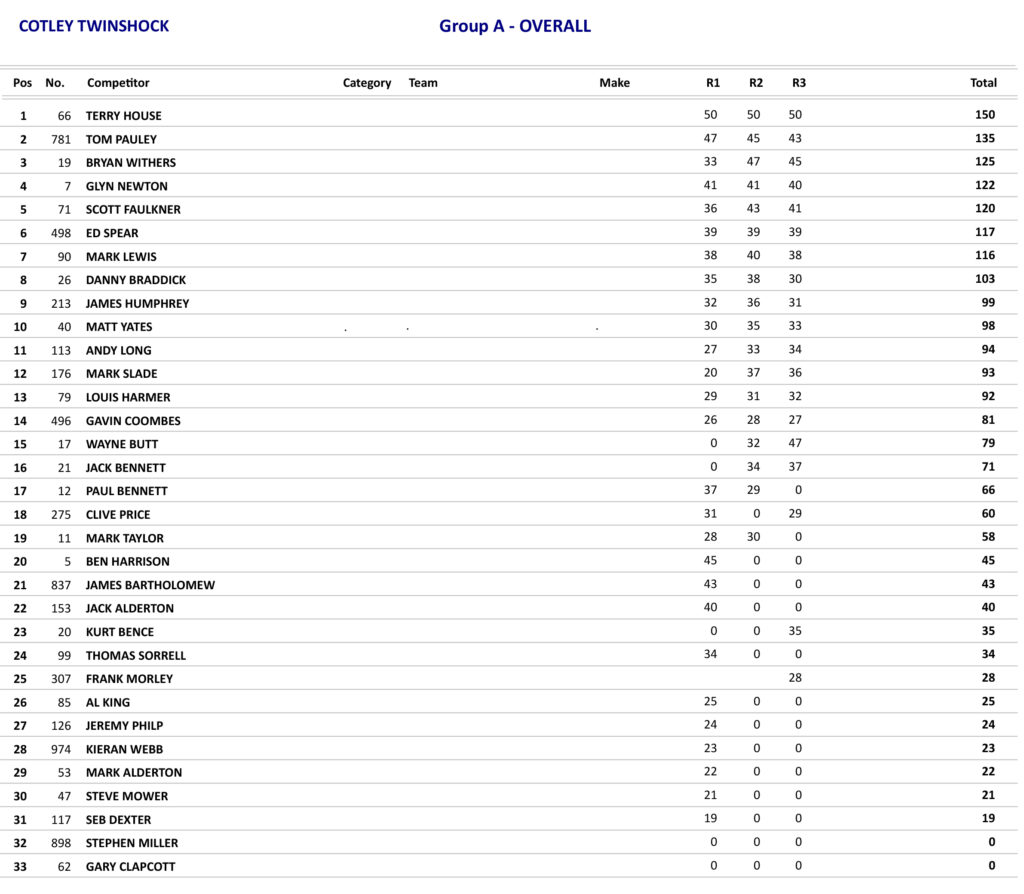 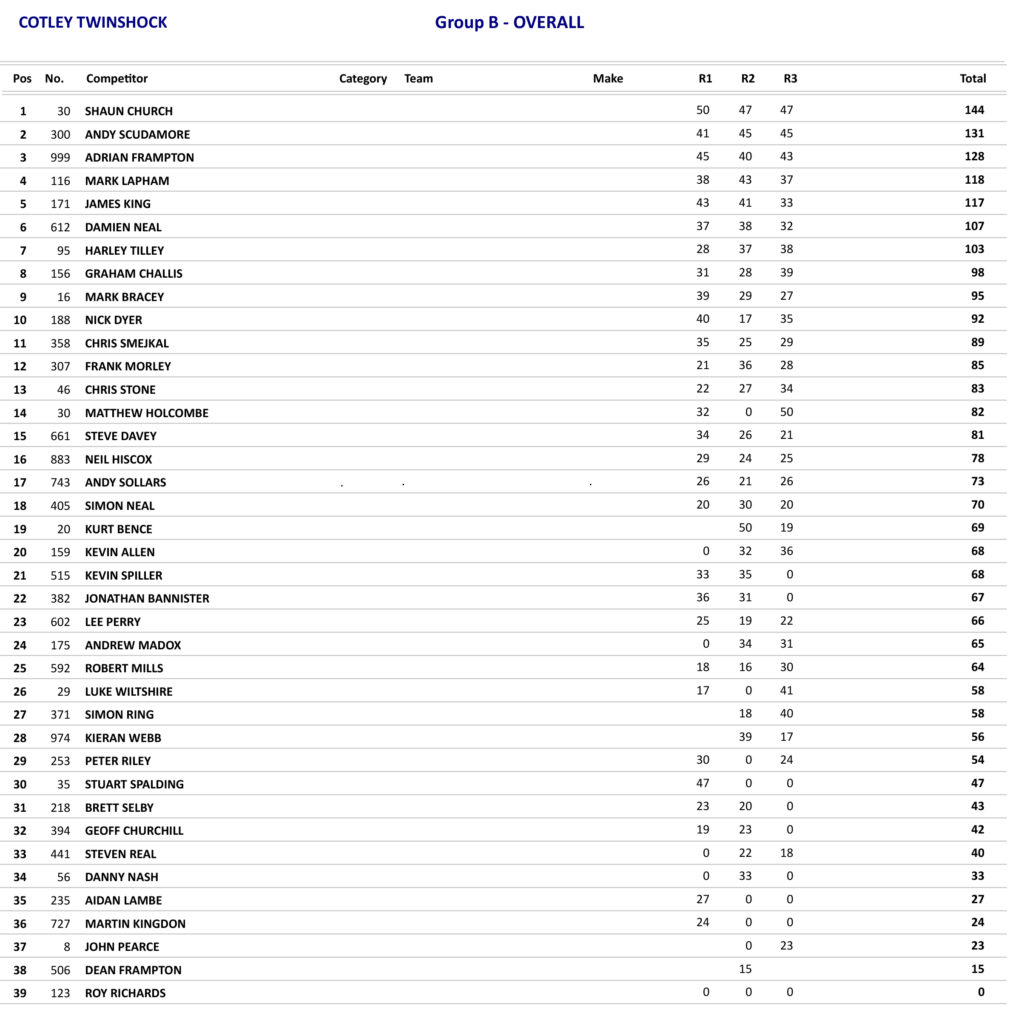 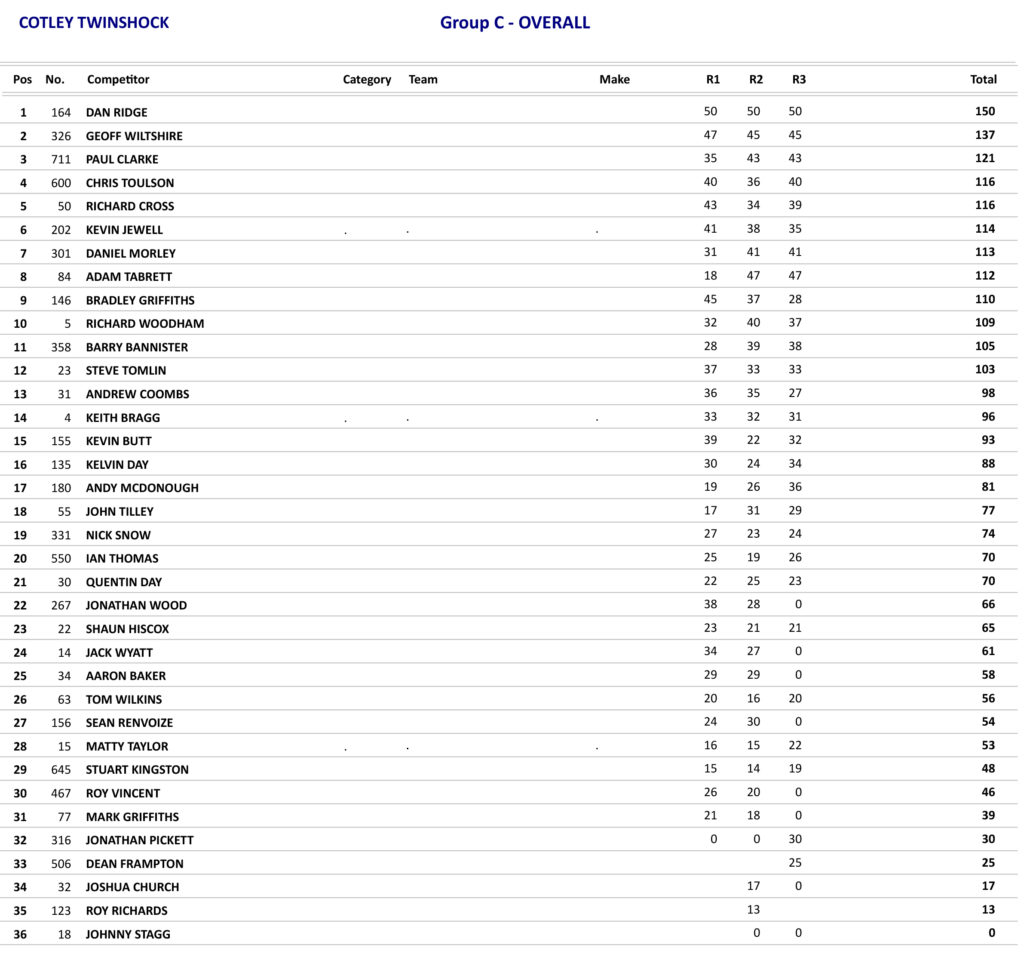 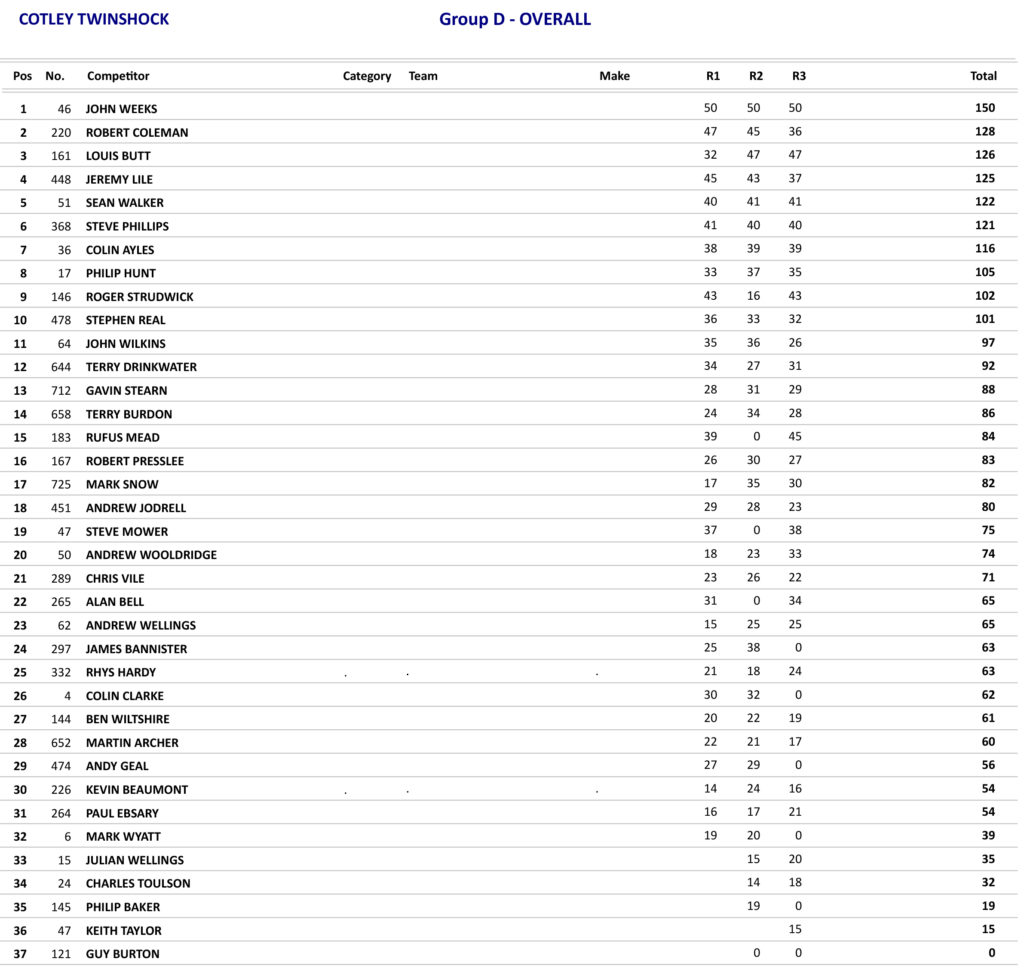