Anderson does the triple in Faezna! MXGP of Emilia Romagna EMX2T 7 EMX125 – Report, Results and Highlights 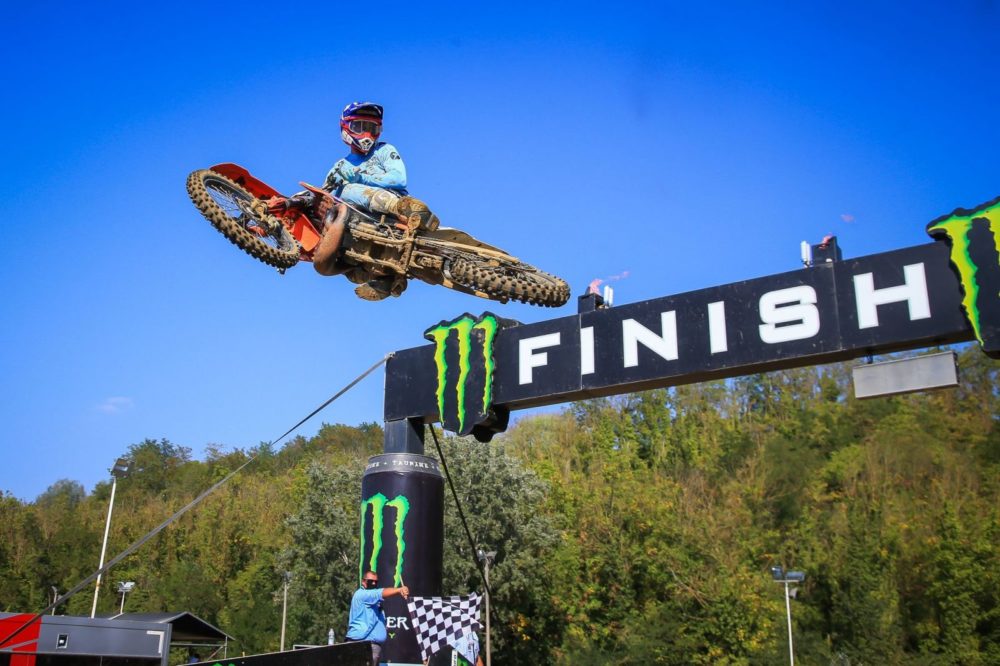 The round of Emilia Romagna concluded stages three and four of the EMX2t Presented by FMF Racing and EMX125 Presented by FMF Racing series. Once again Verde Substance KTM’s Brad Anderson and Andrea Bonacorsi of Fantic Racing repeated their success from the previous rounds, to both take their third consecutive overall victories.

In the opening race of the EMX2t Presented by FMF Racing category, it was Eugenio Barbaglia of Husqvarna Junior Racing Maddii who got the holeshot and was closely followed by Verde Substance KTM’s Brad Anderson as well as Mario Tamai of MGR Motocross Team.

Barbaglia then led the race for a couple of laps before Anderson was finally able to find a way through. The two then had a nice gap to Manuel Iacopi of JK Yamaha Racing who was the rider in third.

Tamai then came under pressure from Federico Tuani from Husqvarna Junior Racing Maddii and Marco Lolli, with the #974 losing two positions on the same lap, which pushed him down to sixth place in the race.

A couple of laps later and Tamai found himself in trouble, as he was rapidly dropping down the field. Unfortunately, the MGR Motocross Team rider did not finish the race.

Gianluca Deghi was another rider we lost early in the race, as he pulled off to the side of the track with a potential bike problem, as the rider didn’t look hurt.

By lap five, Kade Tinkler-Walker who was fourth at the time, was coming under fire from Tuani, though it took the Italian a further five laps to actually make the pass on the Canadian.

Meanwhile at the top end of the field, Iacopi was starting to apply the pressure on Barbaglia as Anderson continued to lead by 2.584 seconds. With two minutes and two laps on the clock the top ten was led by Anderson, Barbaglia, Iacopi, Tuani, Walker, Emanuele Alberio, Loris Freidig, Marco Lolli, Jonas Nedved and Martin Michelis.

A lap later Anderson had doubled his lead to 5.7 seconds, as Barbaglia was doing his best to fend off Iacopi. At one point he was pushing hard to pass him but made a mistake on the pitlane turn and got a tad off line which gave Barbaglia some breathing room. Though on the last lap Iacopi was able to make a pass stick and move into second. 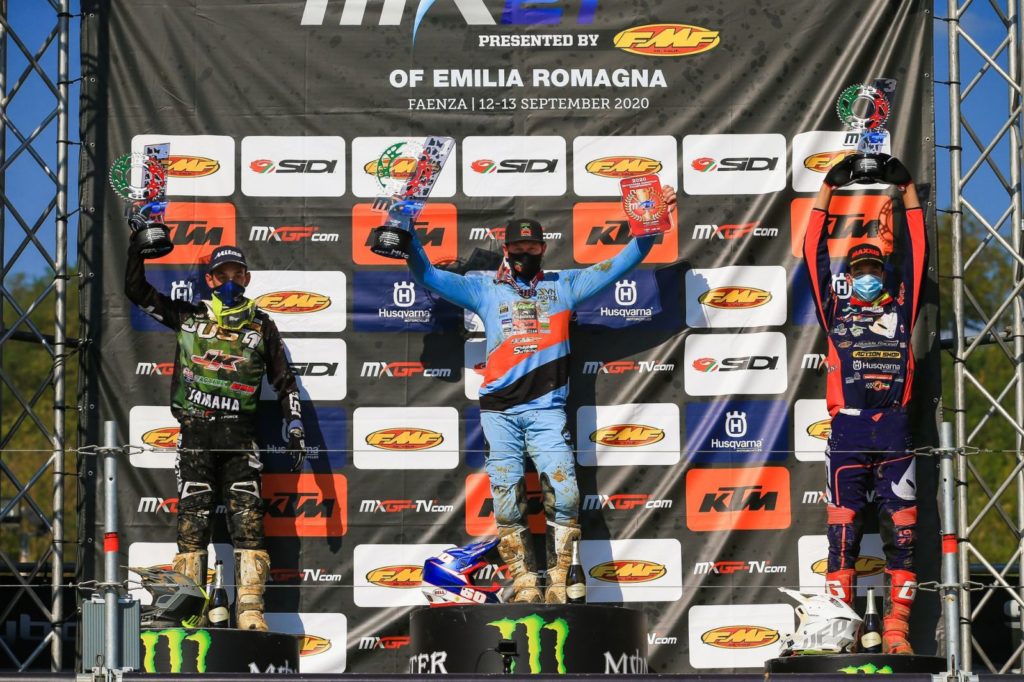 Anderson crossed the line first to take the opening race win, while Iacopi was second and Barbaglia finished in third.

The second EMX2t race saw Manuel Iacopi with a flying start, as he became the early race leader. Though Anderson was just there in second, looking for a way to pass the JK Yamaha rider and get an early lead in the race.

Barbaglia was having another strong start to the race and was third, with Walker and Tuani just behind him, rounding out the top five early on in the race.

Iacopi did well to fend off Anderson for a couple of laps, though the Brit was able to use his experience as an advantage and get into the lead. Though Iacopi didn’t make it easy as he quickly responded. A lap later and the two were still going at it and even at one point touched wheels coming into the pitlane corner.

Soon after that, Anderson managed to finally pick up the pace and find a little bit of breathing room as the gap between him and Iacopi was 2.013 seconds.

By lap three Anderson continued to lead Iacopi, Tuani, Alberio, Walker, Barbaglia, Lolli, Michelis, Freidig and Nedved. The leader then got his head down, setting the fastest lap of the race, slightly edging away from second. Freidig then started to apply the pressure onto Michelis for 8th and was able to find a way past to move up a position.

Iacopi then started to fade a little, as Tuani and Alberio caught on to the back of the Yamaha rider, with all three having a nice battle for second position. By the following lap Iacopi had lost two positions as Tuani and Alberio passed him. Then the action continued between the three, as Alberio was able to find a way past Tuani for second. 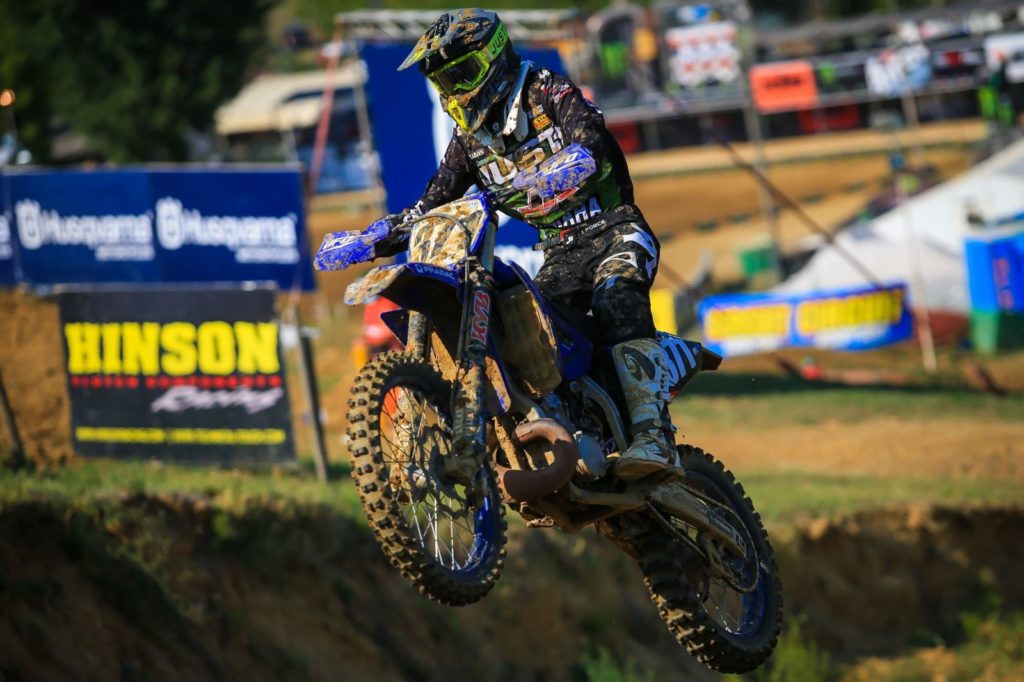 As it stands, Brad Anderson leads the championship by 47 points, over Eugenio Barbaglia in second and Federico Tuani third.

Brad Anderson: “I’m really happy, I didn’t expect to come out here and win all three rounds. This morning I struggled in qualifying a bit, I couldn’t find the rhythm and struggled with line choices. The first race I came out and had a good start, passed for the lead, just checked out and thought about the racing. The second one I struggled a little bit with the heat. Me and Manuel were having a good battle early on and once I got past, I just tried to get my head down. Once I got a little gap, I said to myself to breathe a little bit because the heat was so bad but once we finished, I just needed some water because my mouth was dry, and I struggled. Perfect three rounds now and I’m just ready to go onto the next one”.

“47 points is a lot when you only have two rounds left. But anything can happen, I’ll do my best to keep it on two wheels and wrap this championship up for the third time” he added.

Manuel Iacopi: “In the second race I started in first position and then Brad passed me, I had big problems with my arms and it was not possible for me to follow Brad, I finished in fourth position in race two and second in the first race. Second overall for me is nice and I’m happy about that”.

Federico Tuani: “I feel really happy. The first race I had a problem with my rear brake and my clutch so I couldn’t push 100%. In the second race I started third, I was second and I finished third for the overall and the championship so I’m happy. Two races to go and I feel I can finish second in the championship and I will give it my all for that”. 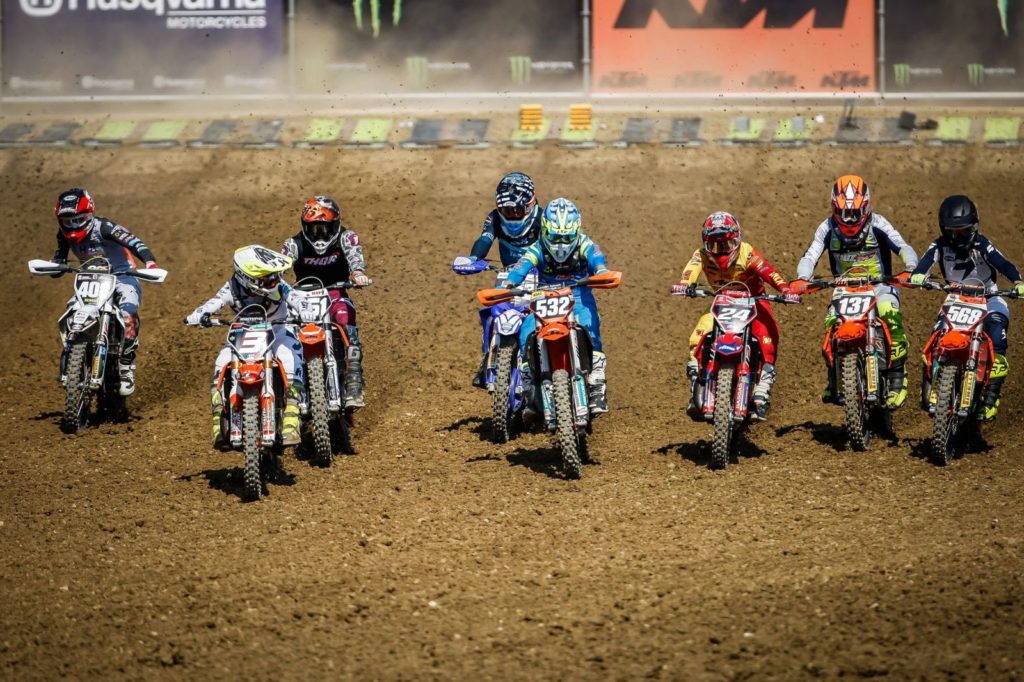 The first race of the EMX125 Presented by FMF Racing saw Valerio Lata, the rider of Marchetti Racing Team KTM grab the holeshot. He was closely followed by Pietro Razzini and Constantin Piller from KTM Kosak Racing.

It didn’t take long for Bonacorsi to get himself into the top three as Guillem Farres of RFME GasGas MX Junior Team was also making moves as he got into fourth and followed Bonacorsi.

It was clear that Razzini was looking for a way to move into the lead as early as possible as he got all over the back of Lata, as less than a second separated the two. Though on Lap five Lata was still the race leader, as Bonacorsi set the fastest lap time of the race and began to close in.

The Fantic Racing rider then found his way through into the lead the following lap, passing both Lata and Razzini. Razzini then came under fire from Farres who also managed to get around him with the Spaniard then setting his sights on Lata. The two were less than a bike-length apart with the GasGas rider eventually finding a way through on lap eight.

Three laps to the end and Bonacorsi was leading by roughly three seconds, with Farres second. Razzini then found his way back up into third with one lap to go, pushing Lata down to fourth. In the end it was Andrea Bonacorsi who won the opening race of the day, with Farres and Razzini secure in the top three.

The second EMX125 race saw W-Z Racing’s Max Palsson who was the leading rider out of the gate and into the first corner. Meanwhile race one winner and championship leader, Bonacorsi was outside the top 10 on the opening lap.

David Braceras from RFME GasGas MX Junior Team then moved into the lead after Palsson and Lata. Bonacorsi was also making moves and was up in eighth with plenty of time on the clock to have a fighting chance for the win. 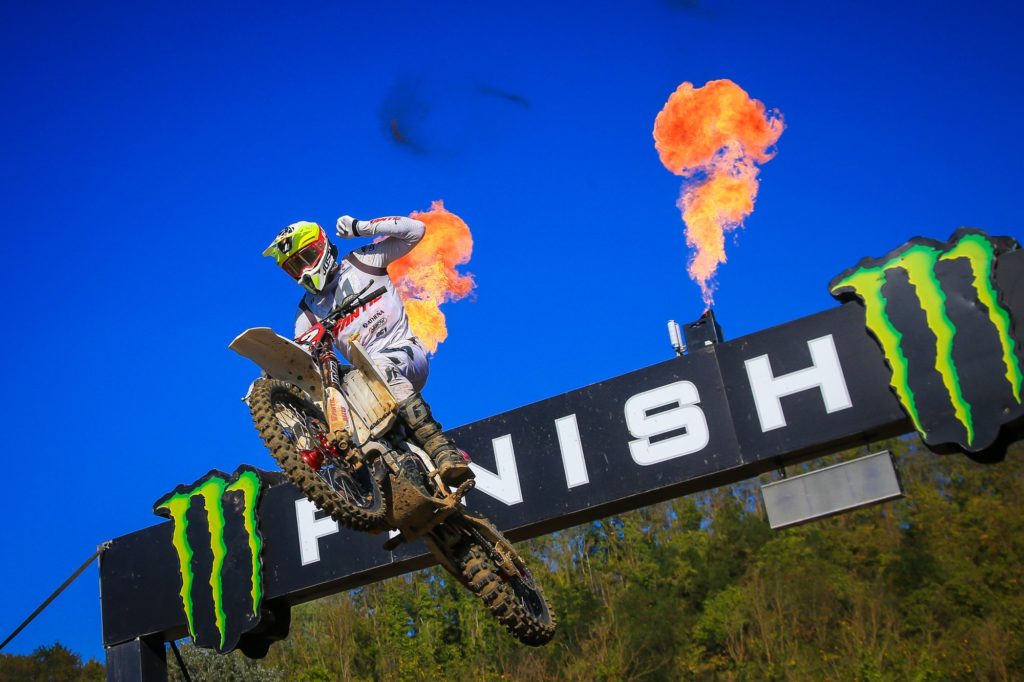 Palsson was then the next rider to make a pass as he moved around Lata for second as Lata was looking to respond. Further down the field, Razzini made a mistake which Bonacorsi used to his advantage to pick up fifth on lap three.

Palsson then lost third to Farres who was looking fast, joining his team-mate in the top three. The W-Z rider then came under fire from Bonacorsi who was wasting no time with 11 minutes plus 2 laps to go.

Braceras continued to lead the way with fellow GasGas rider, Farres in second and Bonacorsi now a real threat in third. The top three were pretty close, as Bonacorsi was able to find a way past Farres for second position after a close battle with the Spaniard.

The Bonacorsi set his sights on the win, though could be seen pushing a tad too hard at one point as he made a couple of mistakes. Though by lap 10, the Fantic rider was in the lead once again.

With Braceras getting pushed to second, Farres used this as an opportunity to catch his team-mate and make a similar pass on the same part of the track as did Bonacorsi a lap earlier, to steal P2 from him.

On the last lap, Prugnieres then started to push Braceras for third, though it didn’t work out as he was able to retain the position until the end. As the chequered flag dropped, Bonacorsi took his sixth consecutive race win, with Farres second and Braceras third.

In terms of the podium, Andrea Bonacorsi secured his third overall win in the EMX125 class, as Guillem Farres made his third podium appearance of the Italian triple-header with second overall, and his team-mate David Braceras finishing in third. 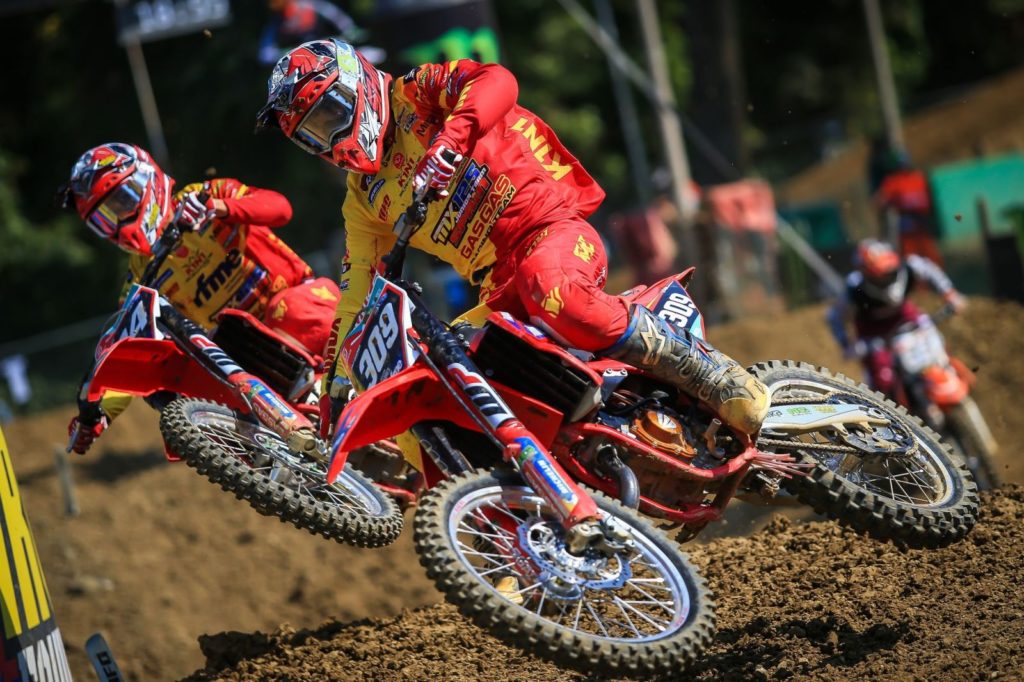 Bonacorsi continues to lead the championship, with Farres now in second and Razzini third in the standings.

Andrea Bonacorsi: “I’m just really happy, it was amazing. I got three double race wins. The starts were not so good and I had to work for it, but I won these two races and I’d like to thank my team, my sponsors, my family who are doing a great job”.

“I didn’t expect to lead the championship so much but I’ve worked hard for it and it’s amazing” he added.

Guillem Farres: “The races were really good today. In the first race I had a bad start, so I had to make my way up to first position, then Andrea passed me, and we had some good battles so I’m really happy with my second place. And then in the second race I had again a bad start, but I was able to pass a lot of riders and finish second again. I’m really happy to be consistent and to finish on the podium every race and now we are second in the championship”.

David Braceras: “In the second race I started good, I was in fourth or something like that, I then moved to first on the opening lap, I tried to push and try to win the race but I think until three laps to the finish I made some mistakes, got tired and the guys behind me reacted really fast and passed me. I finish third and I’m happy with everything, now I will train hard to battle for the win in Mantova”.

Anderson win’s the EMX2T round of Italy in Faenza! – Report, Results and Highlights
Read More

Anderson misses out on EMX2T title as Kras is crowned! EMX2T Final Round – Highlights, Report and Results
Read More

Anderson back with the red plate as Iacopi wins! MXGP of Italy EMX2T – Highlights, Report and Results
Read More