Round eight of the Monster Energy AMA Supercross, an FIM World Championship thrilled with the second of two rounds inside Camping World Stadium in Orlando, Florida with Red Bull KTM’s Cooper Webb taking the 450SX Class win to the cheers of the in-person pod-style-seated fans.

His Red Bull KTM teammate Marvin Musquin kept Webb close, and round one winner Troy Lee Designs / Red Bull / GASGAS Factory Racing’s Justin Barcia held off heavy pressure to finish in third. The event kicked off the nine round Western Regional 250SX Class with a wild and action-filled Main Event that saw Monster Energy Star Racing Yamaha’s Justin Cooper stay out of the chaos to lead wire to wire without any serious challenges.

Webb’s charge from eighth at the holeshot stripe to leading the race in less than nine minutes demonstrated the speed and aggression of which he’s capable. The last time Webb strung together two wins in a row was 2019, the year he won the title. He now sits only six points out of the points lead. Musquin benefitted from a crash in the whoops by early-leader Monster Energy Kawasaki’s Adam Cianciarulo to take over second; from there the KTM rider did not let Webb get away but could not close to within striking distance.

Points leader Team Honda HRC’s Ken Roczen got pinched at the start and found himself in seventeenth position. He made a brilliant early charge and got up to the rear tire of defending champion Monster Energy Kawasaki’s Eli Tomac just four minutes into the 20-minute plus one lap race. After several attacks and counters, Roczen made it past. By then the riders were battling for fourth, and Roczen got right on Barcia’s rear fender but could never get a wheel ahead of him. Tomac lost a spot two laps from the end from a hard charge by Rockstar Energy Husqvarna Factory Racing’s Jason Anderson, who recovered from outside the top ten to earn a top five finish.

The dry, hardpacked track approximated conditions for the traditional Western Regional 250SX Class opener and Justin Cooper took home the win after the Main Event had to be re-started due to crashes. Once into the lead Cooper broke clear of the pack and ran what appeared to be an easy win for his fourth career victory and his second consecutive opening round win. Monster Energy Pro Circuit Kawasaki’s Cameron McAdoo traded a second place start for a fifth with the restart, but within two minutes of the 15-minute plus one lap event had gotten himself back into the second place spot. Putting in a hard charge after finishing the first lap in eighth place, ClubMX / IAMACOMBACK / Yamaha’s Garrett Marchbanks landed the final spot on the podium.

The opening round was a heartbreaker for the Martin brothers Jeremy and Alex. Jeremy crashed just feet past the holeshot stripe on the first lap and older brother Alex crashed hard just two corners after that. Alex was down on the track, necessitating the reg flag re-start.

The series brings together a half dozen title contenders and nine high profile rookies, all without a championship title among them. If the opening round of the Western Regional 250SX Class series is any indication, 2021 will be a dramatic year with hard-fighting and hungry riders looking to take the title in the nine round championship that concludes at the East/West Showdown in Salt Lake City on May 1.

Tickets are on sale for rounds nine through 15, with the final two events in Salt Lake City going on sale soon. Live audiences get the thrills in-person though limited-capacity, pod-style seating. For the full race schedule, air times on Peacock and NBCSN, videos, photos, and more please go to SupercrossLIVE.com. 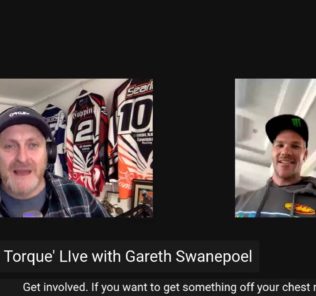