Harry Walker, on his PAR Homes Zip Racing ATVsRUs Yamaha, again proved he can run at the top with the very best of the Europeans by taking an impressive third overall in the hotly-contested FIM EMX Quad Championship for the second consecutive year.

Twenty-year-old Walker was in joint fourth place in the championship prior to the final round, tying on points with Poland’s Roman Gwiazda, and a mere two points away from Latvian Valerijs Kuzmins in third. Kevin Saar (Estonia) and Patrick Turrini (Italy) were safely out front in first and second.

The weekend got underway with timed training, on a wet track, which completely upset the order of play. Runaway leader Saar was down in 10th and Walker in 17th. This pushed Walker back to a second row start for qualifying, and a massive amount of work ahead. In Saturday’s qualifying race, a battling Walker made his way through to the leading pack, only to get taken out when American Josh Merrit hit a dug-out section, ending upside down in the middle of the track on a blind uphill jump, leaving Walker with absolutely nowhere to go. He hit Merrit’s quad which ended up with him under the wheels of Kuzmins. A battered and bruised Walker faced an unfortunate back row start for the vital end-of-series races on Sunday.

Walker posted a time equal to Saar in race day warm-up, and a confidence-boosting two seconds faster than Kuzmins. As the racing got underway Walker was all over the back of Kuzmins but couldn’t get past the Latvian until the heavily watered track dried a little. The Berkshire-man found his form and broke away, also managing to take Turrini with him. Walker finished fifth behind PDV team-mate Christopher Tveraen in first, Saar in second, Sune Lewander in third and Zdenek Polàcek in fourth.

That opening race result certainly produced a nail-biting scenario for Team Walker. It was heading into the final championship moto in third place, but on equal points with Kuzmins.

The reigning British Under-21 Champ rose to the challenge and, again from a second-row start, blasted his way through the pack to gain ground on the leaders. He, as always, dug deep and kept it pinned, taking Lewander on the penultimate lap. In the blistering heat, he then held it all the way to the chequered flag to take a commendable third on track behind Saar and Turrini, and secure third overall in the prestigious FIM European Quad Championship.

Commenting on the weekend, Walker said; “We put the work in when we needed to this weekend. Second row starts were harsh, but I managed to pull a fifth and third to take third overall in the championship which was my goal coming here and I’m happy with after a tough year. A massive thank you to my family for always supporting me one hundred per cent and, of course, my sponsors and everyone else who believes in me. I just go out and twist the throttle, my support group are the ones who keep me going and enable me to compete at this high level of international racing.” 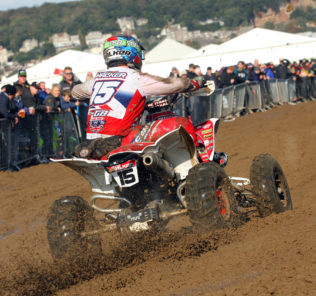