Foxhill was the venue for the second round of the Revo MXGB British Motocross Championship fuelled by Gulf Race Fuels. The weather was fantastic, which made for a very dry track that was sure to test the riders over the weekend.

Qualifying was hard, with Jamie, Martin and Stuart managing to get their quick laps in at the end of their sessions ending up 8th, 9th and 13th respectively. Jack struggled with his new race bike suspension setup being too soft and didn’t better his first qualifying lap, ending his session in 27th.

Martin got the jump out the gate, though lost a lot of positions after getting cross-rutted in the second corner. He managed to come through a few riders until he encountered Brad Todd and after battling for half the race finally made the pass and crossed the line for 7th. Stuart managed to get out of the get well, though was pushed down the order getting caught up with a number of riders in the first turn dropping to around 17th. Stuart made some progress and then crashed, he still managed to get back to around where he was and hold on for 13th at the flag.

Jamie managed a flyer down the start straight and in what looked like a holeshot, unfortunately, didn’t manage to turn into the first corner well and completed the first lap just inside the top 10. With the slick, dry track it was a tough day to be on a 2 Stroke, and Jamie managed to maintain his position for 11th at the flag. Jack, who is still getting used to pro-level racing managed to get out the gate well, though was forced wide on the first corner and pushed down the order. This didn’t deter the young Midlander, who kept his head and was making good progress picking off some of the other rookies in the class making his way back into the points and finishing 19th at the flag.

Martin managed to get another good start, though quickly realised with the heat and energy expelled in the first race this was going to be a case of survival. Admittedly, Martin had to concede a few places and had a breather at the mid-point of the race, to then come back and finish 9th at the flag for 7th overall. Stuart struggled, he couldn’t get into a rhythm in the first half of the race, and this cost him a few positions after a shocking start by his own admission. Stuart managed to find his flow and maintain 17th until the flag which left him 15th overall on the day and not where he wanted to be.

Jamie had another decent start inside the top 10, though lost a few places before managing to claw back to 10th over the closing laps, finishing 11th overall on the day and sitting 4th in the MX2 Revo ACU British Motocross Championship. Jack had learned from the first race, checking up and coming through the middle of the pack to 16th on the first lap when disaster stuck at the top of the hill section he crashed. Jack couldn’t get straight to his bike, so came into the first lap dead last. He managed to pass several riders to finish 25th at the flag and 22nd overall.

Dylan: “The track has been tough and technical this weekend and I feel that all the rider’s results have reflected this. Looking at the positives, the guys are all coming away fit and healthy and we’re making progress on the whole. Jamie now sits 4th in the MX2 Championship, and we know all the lads should be able to improve upon these results at the next round, which is at Lyng. I’d like to thank all the sponsors, mechanics and team members for their continued support. We will be back in action at the end of the month for the MX Nationals at Landrake.” 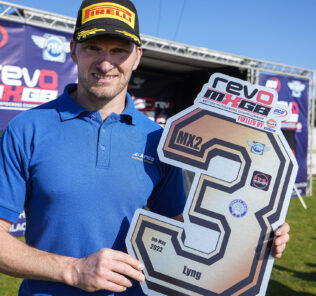 Another MXGB podium for Law as Apico Husqvarna turn it on at Lyng!
Read More

Kevin Stribjos to spearhead Belgium team at VMXDN Foxhill
Next