This weekend saw the third round of the Revo ACU British Motocross Championship fuelled by Gulf Race Fuels take place at the Kent circuit of Canada Heights, located on the hillside next to the M25.

Following prolonged rain on Friday, the track was in great condition as the sun shone all day on race day. Canada Heights had seen a layout changed since the championship visited last in 2019 and now runs in the opposite direction.

Sunday started with the morning qualifying sessions and in the MXY2 class, Sam Atkinson finished 7th fastest overall and 4th fastest in the 250 class. In the MX2 class, Carlton finished the session 12th fastest with several European wildcards ahead of him. Unfortunately, the teams MX1 rider Jason Meara decided to sit out the weekend due to his ongoing shoulder injury. Going into the races both riders were looking for a positive day of racing.

In the MX2 class, Carlton suffered a bad start in the opening race of the day and after finishing the opening lap in 30th place. Carlton had a tough race charging through the pack on a track that was very hard to pass in places. By the mid-race point, Carlton had made it to the edge of the points and continued to push forward to claim 16th place at the finish.

In the second MX2 race, after a slightly better start, Carlton got caught up in some first lap traffic and dropped to the back of the field. With a mountain to claim Carlton dug deep all race long and managed to recover back to 20th place for one point. The two-point scoring results gave Carlton 22nd overall and he now sits 16th in the points standings.

In the opening MXY2 race, Sam got caught up in a first corner crash but quickly remounted at the back of the field. Sam was soon pushing forward and got inside the top 10 but due to the nature of the track, Sam struggled to pass the riders ahead and finish 9th and 7th in class.

The second race saw Sam suffer a mid-pack start and have to work hard once again, this time he managed to get up to 6th at the finish and 4th in the 250 class. The two results gave Sam 5th overall and he now sits 3rd in the Championship after three rounds.

Carlton Husband – “The day started well with 12th fastest in qualifying, but I was just a second off the top 5 so I was happy about that. In the first race, I did not get the best of jumps but was made some passes on the opening corners and then slipped off on the first lap and had to come from the back for 16th. In the second race, it was the same again, mid-pack start and then crashed on the first lap and had to push from the back for 20th. It’s frustrating because I have the pace to run in the top 5 but I need to get the starts and go with the leaders, so I will be working hard before the next event”.

Sam Atkinson – “It’s been a great day, in qualifying I struggled to get a good lap and was 7th fastest, then in the first race I got a terrible start from the inside. I made a wrong decision with not running the puddle tyre and then got caught in the first turn crash. I finished 9th in that race and 7th in class. Then in the second race, it was another bad start but I had a good pace in the race and made up lots of time and got back to 6th and 4th in class.”

Barry Moore – Team Owner – “It’s been a frustrating weekend, both Carlton and Sam showed in qualifying that they have the speed to be fighting a lot higher up than their results showed. On a very difficult track to pass the starts were even more important today but they just weren’t good enough to put us in a position to fight nearer the front of the race.”

Top 10’s at the Heights for Apico Husqvarna!
Read More 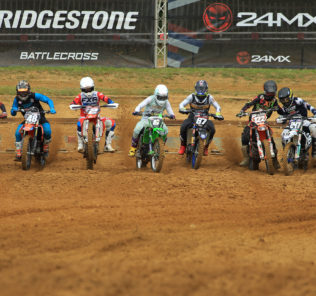 Top 10’s at the Heights for Apico Husqvarna!
Next

Two in the bank for Kieran! 2021 AMCA British Motocross Championship Rounds 2...
Be Social…