Rock Oil Round 4 travelled to North Yorkshire to what was a new venue for many riders in Nidderdale, just outside the Market town of Pateley Bridge. Probably the most picturesque place in the North of England overlooking Gouthwaite Reservoir.

Youth action started at precisely 8:30am with a monster 51 riders on the start line! Incorporating the Carcredit365.com supported Northern Youth Enduro Championship R3, as well as the Rock Oil Club event.

Cameron Baker Haste a newcomer to RAW was in fine form ripping up and down the grassy hillside on his big wheel 85, with a healthy lead in youth A he looked set to take the win until a puncture in the closing stages allowed John Stanley to hunt him down, Stanley just pipped him to the flag. Brandon Burns was another rider who encountered problems when his rear brake boiled and jammed on, the quick thinking lad ditched his bike on track grabbed the spanners from his crew with the help of a marshal managed to keep going to salvage points.

Bert Boam in his first year of Youth A once again got his head down and placed P3 on his RAW supported 85, Boam had Sam Boyd literally nudging his rear wheel for the last 30 minutes of the race. Both riders shook hands after a great battle.

Cristina Palmer made the long journey from Scotland to win the youth B class. Walking the course twice the night before shows how dedicated this lass is. Hayden Stansfield placed runner up and extended his championship points tally, whilst MX convert Zac Cheel was over the moon with his first podium visit having enjoyed his weekend race.

Wayne Braybrook created an AUTO ONLY route to allow the smaller bikes to compete on the same track as other youths with a simple diversion section. James Lindsley was top auto with Jack Houghton in runner up place, both riders on 65’s. Amazingly Jacob Bragg took 3rd place on his CRF50 Auto, something his home fans were really happy about as this kid lives in Pateley Bridge.

Onto a jam Packed Adult AM race, as the sun gleaming and blue skies all around, most riders looked happy to simply sit around and enjoy the valley views!! With the track now fully bedded in, the course had everything from stream crossings, to technical woodlands, and super cool grass enduro sprint sections. There was no part of this track that didn’t make riders smile.

Lee Anderton was the winner in Sportsman after Scott Hipwell led most of the race, Scott was actually announced as winner in provisional results, however when the laps were checked Anderton was winner by less than two minutes. Hipwell looks set to dominate this class in 2019 as he gets to grips with 4 stroke power. Jan Lawrence grabbed the Novice class win from Tom Slater who continues to improve. Dean Bromley took first place Championship points away from Pateley to help his championship cause as he was the first club member home. Separated by less than 10 seconds at the flag the Sportsman Vets class was won by Kris Farrar with Jeremy Ashby almost pipping him at the flag.

An ever closer finish saw Sportsman Elite winner Jack Winn crossing the line just 9 seconds ahead of runner up Nick Manger, Phil Dodsworth had to settle for third as his younger rivals had the edge. Mr Consistent Kev Hipwell rode as smooth as ever to win the Over50 Class from Colin Mills, with Rob Swinbank enjoying his weekend in the Dales taking home third place.

After a short break for the Morning results and presentation, it was onto the more experienced riders to do their thing at Round 4. The spectator area banking was rammed with people getting a great view of the entire start area as the flag dropped on the PM race.

At the head of the Expert class Chris Windle set a blistering pace ahead of his mate Jack Spencer, both riders hanging it out not giving an inch. After both riders fuelled, it was still close until Spencer gapped Windle who did feel the heat of pace over the 2 hour event. Rob Francombe used his head and settled for third to keep his points tally in good shape. Billy Haigh was thrown into the lions den by Wayne Braybrook, this neat quick MX rider held his own in the fast Expert class and placed P5 on the day. Will Westgarth enjoyed this local event with a credible P4 in class.

James Clark was on form in clubman taking the win, with Richard Taylor in runner up place now having really established himself as a clubman top runner in this years championship. Vince Harker was top Elite Vet, runner up Lee Stansfield just missed staying on the same lap as Harker by 4 seconds! In his defence Lee had been running around all morning looking after his boys in the Youth race. Andy Harvey was the final podium visitor in Elite vets.

What a weekend and what a superb venue to host a round of the Rock Oil Championship. Already our 2020 fixture is agreed at this stunning location, the course has already been graded by land crew, and a new paddock road will be put in place so all riders can be in the A paddock come next spring.

Thanks to everyone who helped and assisted in making this event a resounding success. Special thanks to the land owners for putting their trust in Wayne and his crew to deliver a top notch event at a difficult time.

It’s summer break time now for RAW as Wayne Braybrook sets his sights on Erzberg the first weekend in June, we’ll be back on track June 8/9th with the second round of the Protect My Income supported RAW Challenge two man team event. 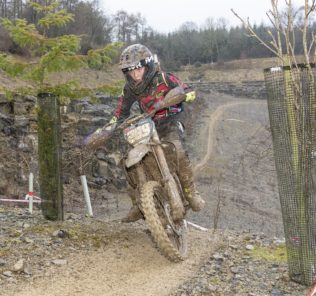 WES IS YES AT THE HALFWAY POINT! WOR ENDURO SERIES ROUND 5 – Race Repor...
Next