A depleted British team travelled to Amriswil in Switzerland for the final round of the IMBA Ladies European Championships. A championship that started full of hope and promise after British Champion Chelsea Gowland won the first round with maximum points, but it all fell apart and following a heavy crash in the Netherlands two weeks earlier she was unable to make this round, with others finding the expense too much and with injuries it was left to Marni Saunders, Charlotte Hall and young 16 year old Bethany Alison to fly the British Flag.

Qualifying and on a track that should have suited the Brits, hard pack and fast it was best Brit from the Netherlands Charlotte Hall grabbing a healthy 10th place, but Saunders never a good qualifier was undeterred in 16th and Allison struggling to gel down in 19th. Upfront and it was Local girl Sandra Keller who took the pole position from Dutch youth Britt Jans-beken and Championship leader Belgiums Brenda Wagemans 3rd.

Race 1 and into the first corner Saunders had a flyer in 5th but immediately got caught up in a pile-up restarting dead last, Bethany Allison managed to avoid it and rounded the first lap in 12th, by lap 3 she was up to 8th place and pushed as hard as she could to pressure 7th but couldn’t make any more headway, 8th place from her poor qualifying was an amazing result. Charlotte Hall fell twice during the race thwarting what could have been a great result but she managed to bring it home in 15th but charging through the field from dead last was Saunders, fired up and on a mission, picking riders off lap by lap finishing in an incredible 10th place. Out in front though there was Swiss rider Keller taking the early lead but an epic battle ensued with Wagemans 4th but she quickly pushed through and by lap 3 was in the lead with Keller chasing hard.

Race 2 and again the Brits didn’t get the best of starts but it was young Bethany Allison leading the charge in 15th, by lap 2 she was up to 11th and then next lap up to 10th pressuring Tyra Zachman all the way until the last lap when she made a superb move to snatch 9th place. Behind her, Saunders led Hall round the first lap in 18th and 19th both having lots to do. It was Saunders who made the best progress picking a way through the field to finish in 11th but Hall was suffering from a battered ankle from her two first race falls finishing 15th. Again the battle up front was won by Wagemans showing why she retained her title with another commanding win.

The final race and Charlotte Hall and Bethany Allison both had a shocker of a start, Hall in 21st and Allison 19th, Saunders didn’t fare much better in 14th so the team had a lot to do. Allison was too eager to make ground quickly and cased a jump damaging her ankle and bravely rode to the finish in 27th. But Hall from somewhere found the determination to put in a magnificent performance, she caught up with Saunders and the two of them picked rider after rider running out of time but came home Saunders 10th and Hall 11th. With the championship secured Wagemans was happy to let Swiss rider Keller take the final win with the super talented Dutch rider Britt Jans-beken second and Wagemans 3rd.

Great Britains young team did a fantastic job making history with Gowland being the first British girl to ever wear the yellow leaders shirt and the first time a Brit has won an IMBA round, Marni Saunders rounded her super year with 5th overall and the whole BWMA Championship riders have combined to give Great Britain 3rd overall and the potential to do even better next year. 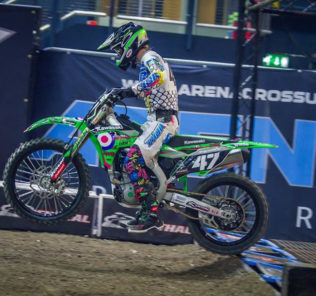