The new REVO Seven Kawasaki team made its competitive debut at the opening round of the 2021 REVO ACU British Motocross Championship fuelled by Gulf Race Fuels at a tough and testing Culham MX Park on Sunday.

It proved to be a day of decidedly mixed fortunes for the team’s MX1 pairing of Dylan Walsh and James Dunn.

Dylan claimed a podium finish after losing a tie-break for second overall with a 2-3 race card but James’ day ended early when a qualification crash put him out.

“Dylan had hard-fought battles with [Evgeny] Bobryshev and Tommy Searle. We do a lot of pre-season testing and suspension work but the conditions today were so choppy that the bike wasn’t quite right and Dylan wasn’t able to push as hard as he would’ve liked.

“The track was really good but it was so gnarly – the braking bumps down the hill were brutal – but all-in-all I’m really pleased for Dylan. You don’t win a championship at the first round but you can definitely lose one and he’s come away with a third overall and is joint second on points which is a good starting point for us.

“There’s been a lot of hard work by the team leading up to this and we’ve come away with a podium after a very positive start to the season for Dylan.

“James has had a great pre-season with no issues whatsoever – he really got his speed up and was riding real strong – and it was so unfortunate that he had a small crash on the out-lap of qualifying that put him in hospital.

“Luckily, nothing’s broken and he’s had a CT scan and everything’s all right, we’ve just got to see when he’s going to be fit enough to ride again.”

“It’s not too bad a result. The track was very difficult. Half of it was soft and half of it was hard and it was real technical.

“We made a few wrong choices with the bike set-up but we’re still learning the bike and things like that can happen at the first race of the season and we’ve learned some lessons for the next round which is good.

“I feel like my riding was a little bit better than my result but overall it’s a good start and there are lots of positives. I’m really enjoying the Kawasaki and we’re going to continue working hard – I think the plan is to head out to Belgium for more training – and keep learning.”

“I think I managed about two corners! I’ve been checked out in hospital and luckily everything’s okay – I banged my head and have a sore leg but after a bit of rest I should be fine.

“It was just one of those freak things that caught me out. I wasn’t even going that fast. It all happened pretty quickly and the next thing I knew I was laying on the floor.

“I felt my preparation had been solid and I was feeling good and looking forward to getting out there.” 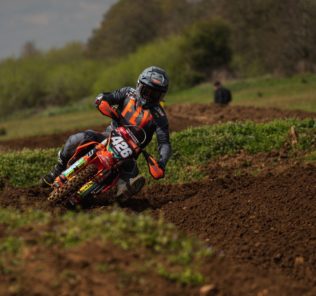 Rob Hooper Racing battle it out at Culham opener!
Be Social…