Five British crews came under starter’s orders during the home round of the IMBA European Sidecar Championship at Lower Drayton, Staffordshire on Sunday and what great racing they were to serve up!

Starting with the mandatory timed qualifying, IMBA regulars Mike Keuben/Lars de Laat from Holland went fastest with Osbaldiston 4th and Etheridge 6th, showing that they also certainly had the speed and were ready for business. When the gate dropped for moto one it was to be the German pairing of Andreas Clohse/Mario Strauss leading all the way but it was certainly going on behind them! Belgian Peter Steegmans temporarily parted company with his passenger Jarno Steegmans after dumping him out of the chair on lap six whilst German crew Christian Hentrich/Stefan Effertz crashed when in a high points scoring position. Gating 6th, Osbaldiston had a strong opening ride to bag 5th but the main drama in this one involved Etheridge. Three corners from home the battling Brit was all over Steegmans, right on his tail and looking for a way through when the Belgian appeared to throw a flailing arm towards him. At the next turn, Etheridge tried to pass again only to be unceremoniously blocked. On crossing the finish line, the feuding pair then became involved in a rather heated exchange and they were certainly not discussing Brexit! So it was 8th for Etheridge, 13th for Cooper, Banks 15th and Skinner 16th.

Skinner and Phillips in moto one

In a dramatic opening lap in moto two, first race winner Clohse was in trouble damaging a steering dampener on his outfit following a collision. Returning to the technical area, his pit crew were rapidly on the scene to replace the offending item before the German was back in action and giving chase, almost a full lap down! Although Clohse then gave it his all to get back and somehow earn 12th, the win on this occasion went to his fellow Countrymen Georg Prummer/Tobias Lange. Just like the opening IMBA clash of the day, most of the moto two talking points though were to be reserved for the closing stages again. Just behind defending IMBA Champions Frank Mulders/Aiver van de Wiel, Osbaldiston was inserting heavy pressure on Steegmans in a terrific battle for 3rd. On the final lap, Mulders then went missing so now it was Steegmans v Osbaldiston for 2nd spot. That runners-up spot looked odds-on to go to Belgian Steegmans until he then saw his outfit’s rear silencer come adrift, losing power in the process. Taking advantage Ossie was right on it and gloriously swooped past his rival on the very last turn much to the delight of the cheering home supporters, a great finish! That man Etheridge also had another stunning ride, moving up from 10th up to 5th whilst Cooper bagged a fully deserved 9th place. In this moto Skinner the only other GB finisher was 14th.

Following the disappointment of going out in the closing stages of moto two, Mulders showed just why he is the current IMBA Sidecar King in the best way possible with a stylish final race victory. Early in the contest, moto two victor Prummer and Clohse had took turns to slot into 2nd before the fast Keuben came storming through. Ossie went from 9th up to 5th in this one with Etheridge in the mix for 11th, Cooper 15th, Skinner 17th and Banks 18th.

Great action from Etheridge and Horton

With two rounds now done and three to come in Belgium, Germany and finally Holland, Osbaldiston is up into 3rd in the IMBA standings and just 31 points off top slot, it’s all to play for! Cooper/Brown were the only other GB crew to contest the opening event staged back in April at Wohlen, Switzerland and with their hard earned points gained at Lower Drayton they currently sit 15th in the table.

Cooper and Brown on their way to 12th overall 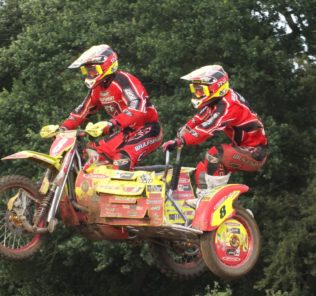 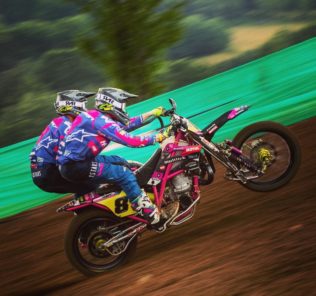 Voase back in the throes… Acerbis Amateur Nationals Round 4 – Rac...
Next