Round 14 of the FIM Motocross World Championship was another one to remember and before we even have time to digest what went down during the races yesterday at the Grand Prix of Trentino, it is already time to look forward to the next one, as the MXGP of Pietramurata is destined to deliver some more thrilling action this Tuesday and Wednesday.

Along with the races of MXGP and MX2, this upcoming Grand Prix will also host rounds seven of the EMX125 Presented by FMF Racing and EMX250 Championships. In the European 125cc class, MRT Racing Team KTM’s Valerio Lata will look to get on the top step of his home fans and continue his lead in the series, while Yamaha Europe EMX125 MJC’s Ivano Van Erp will hope to add another overall victory to his championship scorecard after a successful previous round.

Meanwhile in EMX250, Fantic Factory Racing Maddii rider Nicholas Lapucci will look to bounce back after a difficult round in France as he looks to stay ahead of his closest title rival Kevin Horgmo of SM Action Racing Team YUASA Battery. Rick Elzinga of TBS Conversions KTM is currently third in the series and still has time to challenge the two for the win.

Just when it seems like the title fight in MXGP cannot get any better, it always does. The Trentino Grand Prix yesterday continued to showcase just how strong the category is this season, as the top four in both races battle just within a couple of seconds of one another, making for some very exciting racing.

There’s no doubt that Red Bull KTM Factory Racing’s Jeffrey Herlings is in the best shape we have seen him in a while. During both races yesterday the Bullet had to fight through the field, which was no easy task, but he managed it very well and went on to win both races and add an extra 50 points to his title chase.

While Herlings had the perfect score of 50 points, there were four riders behind him who were tied on points with the podium being decided by the scores of the second race. Monster Energy Yamaha Factory Racing’s Glenn Coldenhoff, Team HRC’s Tim Gajser, Monster Energy Kawasaki Racing Team’s Romain Febvre and Monster Energy Yamaha Factory Racing’s Jeremy Seewer all finished tied on 38 points, but Coldenhoff and Gajser were the two to occupy the podium alongside Herlings, thanks to their second and third place finish in second heat.

For Coldenhoff, this podium appearance was the positive result he was searching for as he struggled in the mid part of the season. The same was for his teammate Seewer who was looking strong right from the morning practice sessions as he topped the chart in time practice. The Swiss went on to take the holeshot in race one and led the way for a total of 11 laps but was caught out by Herlings and finished second to secure his best result of the season so far. In the second race he didn’t get so lucky with the start and could only manage fifth which was not enough for a top three finish.

For Febvre the MXGP of Trentino was a missed opportunity as he is the only rider out of the championship top three that has not won a GP here in Pietramurata. But yesterday he gave as a glimpse of what he is capable of on this track, so a win for the Frenchman could be on the cards even this Wednesday. Herlings currently leads him in the standings by 24 points, so he will need two consistent results to manage that gap.

Red Bull KTM Factory Racing’s Antonio Cairoli will be looking to re-group after an unlucky start to the triple header here in Trentino. Yesterday saw Cairoli DNF both races which was almost a deja vu of what happened here during the MXGP of Garda-Trentino in 2020. With two DNF’s, the 10th title hope seems to be slipping from his grasp but there’s no doubt that Cairoli will fight until the end and will look to finish his pro racing career on a high.

Also having a tough two races was his teammate Jorge Prado who is struggling with a broken vertebra. The Spaniard could manage eighth and 17th in the races, which has proved to be costly for his championship chase.

On the other hand, a rider who put on a strong performance was Mathys Boisrame who had a great debut in MXGP with his new team Monster Energy Kawasaki Racing Team. The Frenchman was very competitive in both races to finish ninth which gave him sixth overall. Following this positive result, it will be interesting to see if he can produce another consistent day on Wednesday.

And with the explosive action that we witnessed yesterday, we’re all more curious than ever to see if Gajser can take back control and win at one of his favourite tracks or if Herlings can add another perfect score and get ahead of Febvre in the championship. Of course, many are also hoping that Cairoli can get back out front and win in front of his home supporters too.

Meanwhile the MX2 championship is also getting interesting as Red Bull KTM Factory Racing’s Tom Vialle has climbed to third in the standings just four points behind Monster Energy Yamaha Factory Racing’s Jago Geerts who finally got back on the podium for the first time since the MXGP of Latvia. Geerts was finally able to put together two consistent results that saw him finally competitive at the top end of the field, especially race two as he challenged Vialle for the win.

Monster Energy Yamaha Factory Racing’s Maxime Renaux continues to lead with 563 points, that’s 92 ahead of Geerts and 96 ahead of Vialle. But with 200 points’ up for grabs the championship is far from over. And he will need to re-group after a tough two races yesterday which saw him struggle in the starts to only manage 8th overall. Nonetheless, he’s likely to come back for the next race on Wednesday more determined than ever to wrap up his maiden title as early as possible.

Yesterday we also finally saw Honda 114 Motorsport’s Ruben Fernandez back on the podium for the first time in 12 Grand Prix’s. The Spaniard has struggled with injury as well as applying too much pressure on himself which deprived him of delivering consistent results, but yesterday he had a solid day to go 4-4 and get himself on the third step of the podium which he will no doubt look to repeat in two days’ time.

The Italian had two tough heats which were only good enough for 12th overall. But it’s important to remember that this is his rookie season in MX2 and the intensity of the MX2 Championship could be factors that is affecting him.

Then there’s Rockstar Energy Husqvarna Factory Racing’s Kay de Wolf and Beaton who have been lurking inside the top five or so for the majority of the season and have delivered a few podiums for the team. Both were looking strong during the MXGP of Trentino and were close to a podium spot, so there’s no doubt that will be their aim for the remaining GPs here.

Let’s see who will end up on top this time around and whether Geerts, Renaux, Beaton or Fernandez can challenge Vialle for the win. 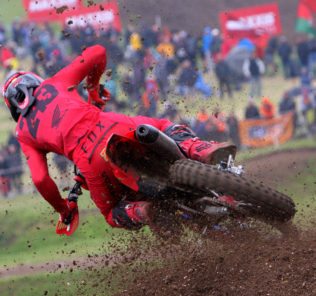 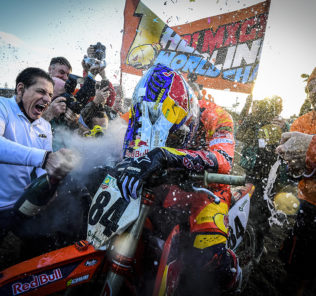 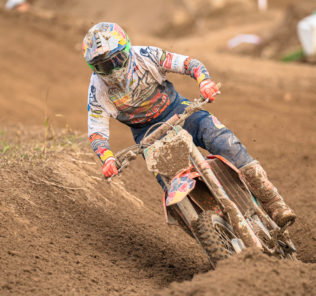 Herlings and Geerts Triumphant at the MXGP of Lombardia – Race Report, Highlights and Results
Read More