The 2021 FIM Motocross World Championship heads into its second of four consecutive Grand Prix’s with the return of Loket for the MXGP of Czech Republic.

Located 150km west of Prague, Loket has been a part of the Motocross World Championship calendar since 1995, with winners of the Czech Grand Prix including the likes of Joel Smets, Stefan Everts, Ben Townley, Jeremy Van Horebeek, Jeffrey Herlings, Romain Febvre and others.

In MXGP, Monster Energy Kawasaki Racing Team’s Romain Febvre is more eager than ever to get on the top step of the podium and this weekend could be his perfect opportunity. Febvre has shown real speed, as we witnessed in Oss, so it is clear that the Frenchman is focused on getting out in front and securing those race wins. He also won the GP in Loket back in 2019, so he obviously knowns how to win on the blue-groove circuit.

Team HRC Tim Gajser will be looking to add more race wins and overall victories to his championship chase after some real solid results the past couple of GP’s, while Monster Energy Yamaha Factory Racing’s Glenn Coldenhoff and Jeremy Seewer will be looking for redemption after a tough Dutch Grand Prix a week ago. Seewer placed on the podium last time around in Czech Republic and could do so again this Sunday.

Red Bull KTM Factory Racing’s Jorge Prado is another potential threat this time around, after some strong races in Oss. Prado was victorious in Loket back in 2019 while he was still in MX2, so of course he too can get around the hardpack track very well.

Others to watch out for this weekend include Standing Construct GasGas Factory Racing’s Pauls Jonass who has been building his results GP by GP and has been close to a podium finish on several occasions now, so it’s only a matter of time before we see him finish inside the top 3.

The big news from Oss is of course Red Bull KTM Factory Racing’s Jeffrey Herlings being forced out of his home GP with a shoulder injury. There is still no definite news on when we can expect the Bullet to make his return while his teammate Antonio Caiorli of Red Bull KTM Factory Racing is another rider who has real potential to win. The 9-time World Champion has won in Loket four times before so we could see him add a fifth this Sunday.

Rockstar Energy Husqvarna Factory Racing’s Arminas Jasikonis had his best GP of the season in the Netherlands where he finished 10th overall. No doubt this will be a confidence boost for the Lithuanian who will hope to get even better as the season goes on. His teammate Thomas Kjer Olsen could perform well this weekend, since he was another rider to finish on the podium back in 2019 while he was still an MX2 title contender.

In MX2, the championship is more open than ever as we enter round five with a brand-new championship leader. Monster Energy Yamaha Factory Racing’s Maxime Renaux now leads Mattia Guadagnini of Red Bull KTM Factory Racing by just five points. The pair have a real chance to win this weekend, as Renaux and Guadagnini have proven themselves to be strong hardpack riders, their wins in Matterley Basin and Maggiora speak for itself.

Honda 114 Motorsports’ Ruben Fernandez sits third in the championship just three points adrift of Guadagnini and is also another rider who will once again challenge for the win. Fernandez briefly held the red plate and will no doubt want to get it back.

Mathys Boisrame, Roan Van De Moosdijk and Mikkel Haarup of F&H Kawasaki Racing Team will enter this round rearing to go after more top scoring positions, especially Van de Moosdijk and Boisrame after a tough Dutch GP. Boisrame and Van de Moosdijk have shown this season so far that they can battle on the sand and the hardpack so it will be interesting to see what they can deliver this time.

Of course, last weekend’s overall winner Jago Geerts will head to Loket with a huge confident boost after a tough start to the season due to a knee injury. Now it seems Geerts is back to his old winning way which we are eager to see more of in Czech Republic as he will go after his second GP win of the season as he climbs up the championship standings, to keep his title chase alive. His teammate Thibault Benistant also has a good chance to perform well on the hardpack as he managed to win a race in Maggiora.

Rockstar Energy Husqvarna Factory Racing’s Jed Beaton and Kay De Wolf were impressive to say the least in Oss, as the pair challenged for the lead in both races to finish the weekend on the podium together. Beaton was 2nd overall for his first podium appearance of the season, while De Wolf made it a memorable home GP with his first top three finish in the MX2 World Championship. Both will no doubt be feeling their best after such a strong previous round and we could see them repeat their success of last weekend this time around.

Meanwhile we’re all still waiting for the return of the defending World Champion Tom Vialle of Red Bull KTM Factory Racing who has so far missed races in Matterley Basin, Maggiora and Oss. Vialle has now dropped to 15th in the championships standings, so hopefully he can return racing very soon and claw back some valuable points. 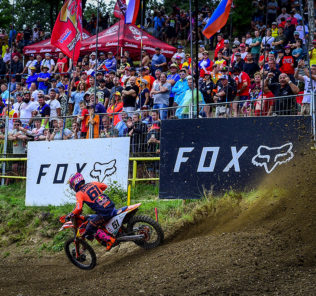 Prado and Guadagnini On the Top Step in Loket. MXGP of Czech Republic- Report, Highlights and Results
Read More 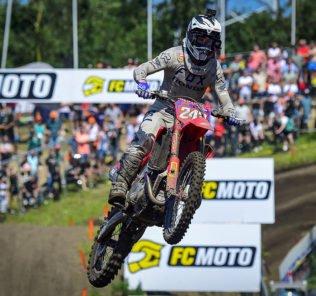 MXGP IS OFF TO OSS! MXGP of the Netherlands – Preview
Previous

Waterman whips up a storm at Coleorton! 2021 AMCA British Motocross Champions...
Next

Todd doubles into Culham! Bridgestone British Masters Round 3 – Race Re...
Be Social…