Another Grand Prix is in the books and now it’s time to look ahead to the next one, as the FIM Motocross World Championship continues its run in Mantova, Italy, with the second GP, the MXGP of Città di Mantova.

The MXGP of Lombardia saw plenty of action as the top riders of MXGP and MX2 battle it out for the top spot, though in the end it was a momentous day for Jeremy Seewer of Monster Energy Yamaha Factory Racing who claimed his very first overall victory in MXGP, while Rockstar Energy Husqvarna Factory Racing’s Thomas Kjer Olsen made his much awaited return to the top of the box, going on to take the overall in MX2.

With the first Grand Prix of three here in Mantova, complete, it’s time to look ahead to the next one, as the action returns tomorrow with more from the WMX and EMX250 riders, before the MXGP and MX2 races on Wednesday – for yet another mid-week special!

This occasion will be a chance for the defending Women’s Motocross World Champion, Courtney Duncan of DRT Kawasaki to fight back and claim those all-important championship points, following an unlucky crash in the second race just a round earlier. Though Larissa Papenmeier, who won the previous round of Lombardia, Mantova and claimed the red plate, together with Kiara Fontanesi and Nancy Van de Ven from Ghidinelli racing s.s.d s.r.l. won’t make things easy.

In the EMX250 class, no doubt Hutten Metaal Yamaha Racing’s Thibault Benistant will be hoping to add yet another overall victory to his growing score, while Maddii Racing’s Mattia Guadagnini will be looking for redemption as he aims for the podium on home soil.

There is no doubt that Jeremy Seewer will be keen on putting together two solid results and add another overall victory under his belt, following some nice racing yesterday. In the first race, the Swiss had the perfect run, starting off with a FOX Holeshot and then leading every lap until the finished flag dropped. The second race was much tougher, as he had to fight his way through, while also recovering from a crash, though it was enough to get him on the podium.

Now with the first overall under his belt, the factory Yamaha rider will be more motivated than ever to carry on with his podium success and deliver even better results in the next races.

Meanwhile for Red Bull KTM Factory Racing’s Antonio Cairoli the next GP will be all about redemption. In the first race the Italian rode strong to finish in third behind Seewer and his teammate Jorge Prado. While the second race was much different. The 9-time world champion crashed twice and could only manage 15th with an injury on his nose.

This was not how he had imagined such race, though in terms of the championship there’s plenty of time to make up for the lost ground. And with the memories of yesterday’s race hopefully behind him, there is no doubt that we will see Cairoli come out with a fighting attitude as he looks to get back that championship lead from Team HRC’s Tim Gajser.

And of course, Gajser is now the new MXGP championship leader as he got his hands on the red plate for the first time this season. An 8-1 result in the races was not enough for the podium, but it was sufficient enough for him to get 5 points ahead of Cairoli in the standings. Of course, having won that second race, Gajser has shown that he is capable of winning in the sand here in Mantova and a good start is all the Slovenian needs for the next races.

Then there’s Prado, who has been nothing short of impressive over the last few races. Once again, his starts were a key to his success as he battled it out for the win with Seewer in the opening race and then led for a while in the second heat. Though with a field stacked full of riders all fast enough and fit enough to win, those victories won’t come easy and he will have to work hard to get back on the top of the box and add a few more wins to his name.

Standing Construct GasGas Factory Racing Team rider Glenn Coldenhoff is another rider who can go after the win at the MXGP of Città di Mantova. Yesterday in the opening race he finished strong in 4th behind Cairoli, while in race two he inherited second after some nice battles during the race. As a result, he also made a podium appearance, finishing in second.

Of course, as with this entire season of the FIM Motocross World Championship, a clear winner is hard to predict, and the last few GP’s have really gone to show that anyone can win in this loaded class.

In MX2, there is no doubt that both Tom Vialle of Red Bull KTM Factory Racing and Jago Geerts from Monster Energy Yamaha Factory Racing will be looking to redeem themselves during the races on Wednesday, after not making the podium yesterday.

For Vialle the day started well. He got a good start in the opening race, which he went on to win by a nice 6 second lead over Thomas Kjer Olsen. While the second race was a polar opposite.

The Frenchman didn’t get start and then struggled to come through the field, before being caught by a number of riders which pushed him all the way down to 14th in the race. Though it was an issue with the front wheel of his bike that he struggled with and the reason why he could not give it his 100% in the race. But now as we turn a fresh new page on the racing here in Mantova, there is no doubt he will ensure things are different on Wednesday.

For Geerts, both races were tough. The first one he didn’t get the start he would have needed to battle at the front, though he successfully made his way through the field before crashing out, to eventually finish 11th. Then in the second one Geerts got a better start and was going after Hitachi KTM Fuelled by Milwaukee rider Conrad Mewse for third, before having a crash. He then picked himself up and made good passes to move into 4th before repeating his mistake and crashing once more. Eventually he finished the race 8th – a result he would not be happy with.

Though a new GP is another opportunity to make things better, and that’s what Geerts will expect to do. He is strong in the sand as he has proved this on numerous occasions, he just needs to keep it on two wheels.

Then there’s the podium duo from Rockstar Energy Husqvarna Factory Racing, that is Olsen and Jed Beaton. Both riders have come quite far since their tough races in Latvia and it’s clear that the pair in heading in the right direction. For Olsen, he’s now got the confidence back where it needs to be for him to battle in the lead, while Beaton also got a much-needed confidence boost following that win in race two.

Now as the pair ticked off yet another podium yesterday, we can expect to see them challenging at the top end of the field once again on Wednesday as they look to go after more during the MXGP of Città di Mantova.

Meanwhile, Maxime Renaux of Yamaha SM Action M.C Migliori J1 Racing, Mewse and Monster Energy Yamaha Factory Racing’s Ben Watson, will be pushing for more during the next few races as they look for their shot at the podium.

And of course, Mewse will want to do the same. He had a great second race during the MXGP of Lombardia where he finished 3rd, but it’s that consistency that is needed for the Brit to secure a spot on the box. It will be interesting to see if he can deliver more during Wednesday’s races. 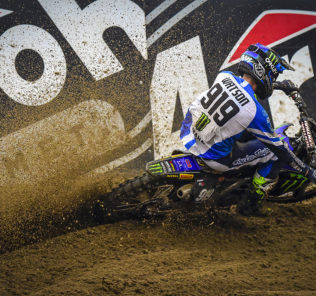 Moto podium for Mewse at Mantova – Hitachi KTM Fuelled by Milwaukee Tea...
Next