Recognising the importance of AMCA grass roots racing, Matt Chaplin an AMCA Championship rider himself and Lee Shearing, also a rider and owner of Kellaway Motorcycles in Bristol decided to get their heads together and form a new race team. So after many hours of conversation and negotiation, KMR was born and will make their debut out on track in 2021.

With most of Lee’s time required in running his business but always in the background and ready to offer support, it was Matt who was tasked to perform the chasing of potential sponsors and riders. Receiving a pleasing amount of interest in their plan, Matt was therefore very delighted to get Kenda Tyres UK through Cambrian Tyres, CI Sport, Putoline, GP Grafix, Drink Generate, Rock Awnings and of course Kellaway Motorcycles all onboard. So now the next task was to pick the team riders with both Matt and Lee in total agreement that they should help racers who normally don’t hit the headlines and generally have never received assistance to compete.

The main focus of the KMR Team comes at AMCA Club racing level where they will be supporting a total of four riders. In MX2 Juniors, Sam Shearing having his first full year of competition and Jack Cole are representing KMR. Both lads will be coached and supported by Lee Shearing who himself is going to race in the MX1 Vets class.

The final AMCA Club level KMR Team member is 9 years-old William Bryson. Moving up from the Autos into the Inter-Juniors, William is a very keen young rider with a great attitude towards the sport. William, like his fellow teammates Jack and Sam are all hoping to progress in the AMCA ranks with their ultimate aim to maybe eventually appear at Championship level!

KMR are also going to have two AMCA Championship riders in the team. In the AMCA MX2 class their runner will be Joe Russell, a rider who has not competed for several years due to other commitments. Alongside Joe at Championship level will be joint team boss Matt Chaplin. Having finished 26th in the MX1 title race, Matt will be switching to the AMCA Vets class for 2021.

For 2021, the team will be mounted on either KTM or Husqvarna machinery. KMR Team owners Matt and Lee are looking to continuously raise the profile and build for the future, also attracting new young talent to the sport they love. Good luck and well done lads on your support of AMCA sport at the grass roots level! 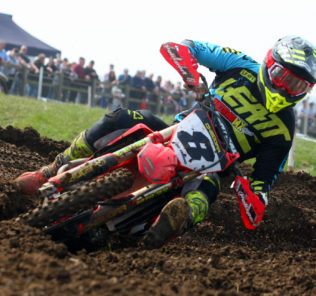