Holcombe & Freeman on the podium at Italian Enduro Championship round 6

The sixth round of the Assoluti d’Italia Enduro was held on Sunday 16th May 2021 in the city of Fabriano, nearby Ancona. The bad weather characterized the race day, without compromising the outcome of the event. The three special tests, designed by Motoclub Artiglio, were located in the same area of the World Championship held in Fabriano in 2016.

The Beta Factory Enduro Team came at the race with Brad Freeman on his Beta RR 300 2T and Steve Holcombe, who recovered from a hand injury, on Beta RR 350 4T. The two World Champions rode a great race and finished on the podium in the Foreigners class and in the prestigious Overall.

Steve Holcombe’s race was of an excellent level. The British rider, current Champion of the Enduro GP and E2 Class, made good times in Cross Tests and Extreme Test but he failed to shine in the Enduro Test. Nevertheless, Steve Holcombe ranked second in the Overall Class, just eleven seconds behind the winner. Same position and gap in the Foreigner Class.

Brad Freeman had a varied race. The start of the reigning E3 Class World Champion was very good, but then he made too many mistakes between the second and third lap. On the fourth lap Brad Freeman showed instead all his qualities, getting the best Overall time of the Enduro Test. His final ranking was a third place in the Overall and Foreigner Class.

Excellent performance for Gianluca Martini, winner of the 250 2T Class. Third place for Filippo Grimani of Beta Team Entrophy Junior and another third place for Gabriele Pasinetti in the Youth Class.

Steve Holcombe: “I’m happy to be back racing in Italy, I’ve missed races during this recovery period. My performance is undoubtedly satisfactory and above all expectations.”

Brad Freeman: “A fluctuating race in concerning timing, but I am happy with the race pace. Now maximum concentration for the next round of the Assoluti and then we’ll go right into the EnduroGP.”

Next appointment on Sunday 6th June in Sarnico (BG) near Iseo Lake for the seventh round of the 2021 season of the Assoluti d’Italia Enduro. 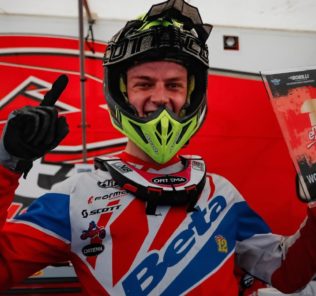 The Red Bull Romaniacs adds a Marathon Stage to the World’s toughest Hard End...
Next

Tickets now on sale for Lyng round of the Revo ACU British Motocross Champion...
Be Social…