Hales back in the Mix! Indian Motorcycle Flat Track Nationals Round 4 – Race Report and Results

Toby Hales became the third different winner in the 2019 Indian Motorcycle DTRA UK Flat Track Nationals, recording in the process the first podium finish of his title defence. The reigning Champion secured the sixth victory of his four-year pro career and proved his mastery of Amman Valley Trotting Track with his fifth success around the half-mile oval.

Having set the tone with a third to first effort in challenging conditions in his opening ride, the path to victory eased for Hales as the cloud cleared from South Wales. It was in his second outing that the eventual winner came closest to his only dropped points of the day, Heat Four lining him up from the back row of the grid with big name Wild Card Franc Serra lining up on the front. But it was Maikel Dijkstra who provided the stiffest opposition, becoming the only man to pass Hales all day as the pair came through the field together. In fact, it was only a last-bend puncture that denied the Dutchman a memorable win after no less than seven spectacular overtakes.
With two wins now sealed Hales could now confirm victory with a win in Heat Five and this time it was Bailo who proved the main antagonist, the Spaniard forcing his way through from the back with successive overtakes on Franc Serra and Rob Mear before hassling Hales right to the finish.
A completed hat-trick for the number one meant points rival Gary Birtwistle was denied a shot at the meeting win in Heat Six, although that didn’t stop the action from flowing with another classic – Birtwistle and Sastre swapping positions on no less than six occasions before Birtwistle finally came out on top to secure second in the meeting Standings.
Behind the top two points and therefore positions were even more closely contested, and in the end it was Gerard Bailo who proved the most consistent of the overseas visitors to claim third. His fellow Spaniard Ferran Sastre also looked fast but was only able to pick off Rob Mear on the final lap for ten points from his opening ride, leaving him under pressure in Round Two, and he then almost ran up the back of Bailo in Heat Three when challenging for second. Mear himself held several strong positions thanks to his starting prowess but found himself unable to hold them on the largest track of the DTRA calendar.
Round Four provided a superb volume of overtaking and a first-time winner for this 2019 season. Toby Hales will now be the man to beat for tomorrow’s Fifth Round, the only back-to-back of the campaign as the riders stay on in Ammanford. But as the only rider yet to drop off the podium this season, Gerard Bailo is very much the favourite to claim the crown as we pass the season’s mid-way point in Wales.
AMMAN VALLEY RESULTS: 1. Toby Hales, 2. Gary Birtwistle, 3. Gerard Bailo, 4. Maikel Dijkstra, 5. Ferran Sastre, 6. Franc Serra
2019 CHAMPIONSHIP LEADERBOARD: 1. Gerard Bailo 70, =2. Gary Birtwistle 57, =2 Ferran Sastre 57, 4. Toby Hales 48, 5. Rob Mear 33, 6. Maikel Dijkstra 32 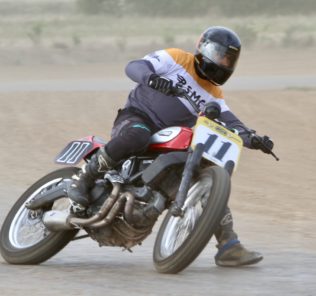 Bubb blitzes Wroxton! Apico BSMA Nationals Round 4 – Race Report and Re...
Next