It was billed as the ‘grandest stage of them all’, and it more than lived up to its billing. The 2019 British Masters has been praised and lauded from far and wide as everyone in the huge crowd witnessed race after race of tremendous track racing, with plenty of drama thrown in for a good mix.

In the sidecar class, drama began in the first meeting of the two favourites. Five times champions Mark Cossar and Carl Blyth, reunited for the British Masters after Carl’s few months out, looked very fast as they led home their main rivals, Gareth Winterburn/Liam Brown. But just as the leaders approached the finish line, their Suzuki GSX-R engine blew itself apart, leaving Winterburn/Brown to pass the stricken Cossar/Blyth combination.

Winterburn/Brown, the reigning, defending champions were having a reunion party themselves, after Liam had sat out a few weeks pending disciplinary action regarding an incident earlier in the year. From this dramatic first heat win, they went on to win their next two races in tremendous style. A blip of sorts came about in their final qualifying heat as they were involved in what was possibly the race of the day. They made a poor start and were boxed out at every quarter. Eventual winners of the race, Matthew Fumarola/Gareth Williams had ridden a fabulous race to take a well earnt victory in this spectacular sidecar heat. Winterburn/Brown found themselves finishing 4th.

Paul Whitelam/Alan Elliott seemed to recover some form when they needed it. They rode consistently well throughout the heats, picking up two excellent heat wins. This saw them comfortably into the top six. Similarly, Colin Blackbourn/Carl Pugh made sure that they were never out of the top 3, winning their third leg convincingly.
Rod Winterburn/Billy Winterburn were also very quick, winning their very first race on a machine having its maiden voyage on a Grasstrack circuit. Another win in their final heat meant that the other Winterburn outfit had virtually secured their top six spot.

Fumarola/Williams, who were suffering with poor starts, still were managing to haul themselves into the top 3 in their heats, but a difficult semi-final saw their meeting end at this stage. Rob Wilson/Terry Saunters was on the cusp of reaching yet another British Masters final. Crucially however, Wilson had failed to win a race in the heats and the final. This would mean that they would just miss out on the all-important top six.

Young Cornish racer Kieran Hicks and passenger Kieron Ivy began their day with a 4th, but then made an excellent start in their second race to take an important heat win. Another 4th followed, and then contact with another outfit in their final heat saw them tumble down the points order and all seemed lost. But a tremendous semi-final victory meant that remarkably, Hicks/Ivy would creep in as the final qualifier in the final.

Whilst all of this was going on for these crews, the Cossar/Blyth pit was alive with commotion. After blowing up his engine, Mark Cossar was forced to revert to his speedway outfit for his second race. The outfit, clearly not set up for this type of terrain, made a poor start as expected. But one by one, Cossar/Blyth picked off the other crews and won in superb style, passing Myles/Robbie Simmons in the last lap of the race.

Realising that the suspension-less speedway machine was not going to be the tool for the job on this day, Cossar decided to pluck the Suzuki engine from the speedway outfit and put it in his Grasstrack frame. Whilst this took place, Cossar/Blyth called upon Carl’s older brother Stef to lend them his outfit so Mark and Carl could complete their third race. Remarkably, they appeared in their fourth and final heat back on board their Grasstrack bike, complete with newly fitted speedway engine. They they won the race and saw themselves safely into the latter stages of the day. I real test of attrition and fortitude on the part of Mark and Carl. Plenty of others would have thrown the towel in when engine number 1 expired.

In the solo class, from the very start James Shanes looked like he was a cut above the others. Bear in mind that this field of solos had 8 riders who will be competing in the European Championships final next week. This was one of the strongest fields of riders in the world. But Shanes looked unstoppable, winning all of his heats and the semi-final by a considerable margin.

Problems for Andrew Appleton in his opening ride spelled the end for his 2019 campaign. He made a superb start and led Kennett into the first bend before throwing a chain, and nearly throwing himself off too. Clearly, the sudden stop had caused an injury to Appleton, who wasn’t the same rider in the next ride. He was forced to retire from the meeting.

Another big name suffering misery was Chris Harris. After struggling on the grippy circuit in his opening ride, he then looped his machine in his second. He completed all four of his races but was far from his best.

Sadly, the only accident of the day came when Tim Nobes fell heavily. He was treated for a broken arm, but later it appeared that no bones were broken. It marked the end of Nobes’ day after riding consistently.

Heading into the all-important, winner-take-all final, several riders had claimed victories including Wajtknecht, James Wright and Tom Perry. But it was Paul Cooper who claimed a win in his semi-final. He had finished second in all of his heats, but had found the right set-up just at the right time to win the semi-final and hit form going into the final. Shanes duly won the other semi-final with another dominant performance.

Love them or hate them, the winner-take-all, first-over-the-line British Masters final creates a dramatic crescendo to finish the meeting with. The riders heading into the highly pressured race chose their gate positions carefully, knowing that all will be won and lost over four laps.

The solos saw the sixth win of the day for the sensational James Shanes. In truth, he never looked like being beaten. Exiting champion Zach Wajtknecht made sure he claimed second place but had no answer to Shanes, who joins Andrew Appleton, Paul Hurry and Kelvin Tatum as a four-time British Masters champion. At only 22 years old, it’s difficult to believe that he will not surpass the current record of five titles, held by the late, great Simon Wigg, before he is done.

The battle for the final rostrum place came down to the last bend. Paul Cooper got himself into third and looked to have another rostrum sewn up, but a back wheel puncture in the latter stages of the race allowed Paul Hurry to blast past and claim yet another Masters rostrum finish.

The sidecar final saw a similar dominant victory for Gareth Winterburn/Liam Brown. They made the best start they had made all day in the final, and rode sensibly and conservatively on the inside line for four laps. A fine performance, and a tremendous defence of their title. Behind them, plenty of squabbling took place. Colin Blackbourn/Carl Pugh had got themselves into second, and defended their runners-up spot with all they had until eventually, Mark Cossar/Carl Blyth made their way past and claimed an extremely unlikely second place after the day’s events.

The GTSA club, synonymous with Lefthand sidecar racing for so many years, naturally provided a Lefthand Sidecar support. Tommy Penfold, who was passengered by Terry Draper in Terry’s first ever appearance on a sidecar, showed great speed to win three out of four of the races. They made a mess of the start in one heat which allowed Alex Balman/Mark Hopkins to get away, but they were passed right on the line by Rob Heath/Kyle Fish in a highly entertaining race. The overall victory was Penfold/Draper’s, who simply had too much speed for the others.

This was an absolute triumph for Grasstrack racing in this country. The circuit rode well, the crowd was fantastic, the venue was setup perfectly and even the weather played its part. The added touches of the magnificent winner’s rostrum, the pre-Masters party and the music, provided by Matt Saul, made the event just feel special- exactly what it should be in a meeting steeped in so much history. 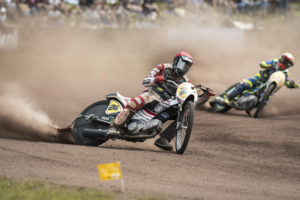 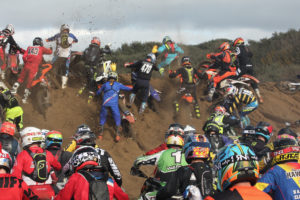