With Saaremaa in Estonia marking the first leg of a northern Europe double header for the BORILLI FIM EnduroGP World Championship, conditions were hot, dry and very physically demanding. A mixture of soft sandy terrain and hard pack trails ensured a thorough test for both riders and their machines.

After a slightly longer wait than many expected, Garcia finally recorded his first win of the season on day one at the GP of Estonia. Confident that the hot and dry conditions would favour him, he hit the ground running with the fastest time in Friday’s AKRAPOVIC Super Test. However, Australia’s Wil Ruprecht (TM) was quick to fight back. Topping the NERVE by JUST1 Extreme Test, he put his TM out front and the battle was on as Freeman also joined in on the action. The trio were pushing hard, with no-one able to make a clean break.

Mistakes by Ruprecht on the CHAMPION Enduro Test saw him lose touch as Garcia found another gear on the final lap to claim an eight-second margin of victory over Freeman. With a flyer of a final lap, Verona raced his way into contention. Fastest on the final NERVE by JUST1 Extreme Test he secured third by less than two seconds over Italy’s Davide Guarneri (Fantic).

“It feels great to get a win on the board,” told Garcia. “I knew conditions would suit me but I made some small crashes and mistakes on the opening lap that took a little time to recover from. I’ll try to fix those for tomorrow and push again for the win.”

The Enduro1 category was once again a battle for victory between the Italian pairing of Verona and Guarneri. With little to separate the duo throughout the day, it all came down to the final test. With the clock stopping in Verona’s favour, he picked up his fourth win of 2021.

“It was so physical out there – hot weather and sandy tests,” told Verona. “It was a very tight battle again with Davide and myself all day. I think that helped push us up the overall results too. To win Enduro1 again and get on the EnduroGP podium is brilliant.”

The Enduro2 class began as a two-horse race between Garcia and Ruprecht with the duo immediately establishing themselves at the head of the field. However, with mistakes for Ruprecht coming in the second half of the day, it gave Garcia the breathing room he needed. Pulling clear to claim a 79-second winning margin, he ended his day a happy man.

With Ruprecht ending his day in second, as the fight for the final step of the podium was played out between Hamish MacDonald (Sherco) and Steve Holcombe (Beta) with MacDonald eventually taking it by 10 seconds.

The Enduro3 category was yet again the Brad Freeman show as the Beta rider stamped his authority on the proceedings. With a more-than comfortable one-minute and forty-five second margin of victory, Freeman claimed his fifth win of the year.

It wasn’t all plain sailing however, with Freeman finally losing two special tests. Spain’s Jaume Betriu (KTM) claimed one to end his day as runner-up, while Sherco’s Danny McCanney took the other to finish third. Husqvarna duo Jamie McCanney and Andrew Wilksch rounded out the top five.

The TM duo of Pavoni and Macoritto ruled the roost in Enduro Junior, with Pavoni holding command over his teammate. Despite some impressively fast times set by Macoritto, Pavoni matched that speed with consistency to claim the top stop for the fourth time.

Macoritto enjoyed the lion’s share of test wins with eight, but will need to eliminate those mistakes to put his TM on top. Sherco’s Leo Le Quere ended his day in third, while Sergio Navarro (GASGAS) and Max Ahlin (Husqvarna) were fourth and fifth respectively.

After ending the opening days in Portugal and Italy as runner-up, Norrbin finally reversed that trend to take victory in Enduro Youth. The young Swede was on fire on familiar terrain, powering clear to a convincing 52-second margin of victory. Finland’s Pyry Juupaluoma (Husqvarna) made his first appearance of 2021 for second, with Kevin Cristino (Fantic) third. 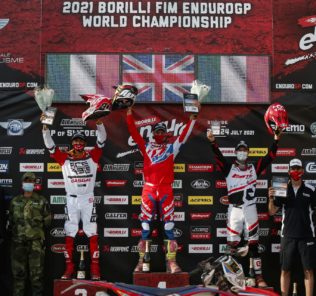 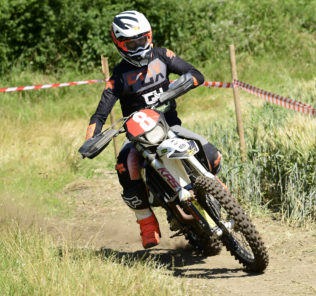