The Chambers Husqvarna Racing team travelled to a very wet and windy FatCat Motoparc, just outside Doncaster for the fourth and final round of this years shortened MX Nationals championship. Ben Franklin mastered the hard and technical sandy track conditions and recorded the team’s first and only overall pro class win for this shortened racing year.

Team principal, Tim Chambers said after racing had finished for the day, “We wait till the last national of the year to get out first overall win. Ben has been working hard all year. Never in the spotlight but just keeps striving to get better results and hard work pays off in the long run. Two third places today and the overall win. Quality”

The teams top scoring MX1 rider Jake Millward was back to his old fast racing self and was mixing it with the front runners in both races for fifth overall. “The first race was really good, and it was the first time I have felt like my old racing self for a long while,” said Jake, “I didn’t have the best of starts but managed to fight my way through to third place. I caught Evgeny Bobryshev on the last lap, but my bike cut out on the very last corner, we don’t know why yet. I got it going again and finished fifth. Third would have been better, but my riding was good so I can’t really complain. I got a very good start in race two and was holding my position for the first couple of laps till I jarred my back out the back of the circuit and for the rest of the race I was riding around in agony. Two fifth places for fifth overall isn’t a bad result so it’s been a good weekend”

Also in the MX1’s Aaron McCarroll, while still suffering from a shoulder injury put together two strong point scoring rides to end the series and said after, “The first moto was pretty good as I started off steady and picked off riders as they became tired and ended up thirteenth across the finish line, which is the best for me in this bad year. In the second the track was really hard work and I rode it like an enduro but finished quite strong for some good points”

Ben’s pro MX2 win went almost unnoticed as most eyes were on the other more fancied riders who either broke down, crashed of just run out of energy but Ben proved the old saying, “to finish first, first you have to finish” taking the overall pro MX2 win. “It was hard work out there today, but it’s great fun when the track is like that, it’s a proper track,” said a happy Ben, “I had a slight problem with my goggles in the second race, but I just made it work and got around it. Apart from that everything worked well and was great”

Tom Grimshaw didn’t have the best of day’s as he was taken out by another rider in the first race and followed that up with another crash and that was topped off with the bike coming to a halt for no apparent reason within sight of the finish line. Race two buy comparison was uneventful and all this on a track he doesn’t really like. “It was always going to be a struggle for me here today as it takes a lot of arm strength and there are riders that ride this track all the time,” said a disappointed Tom, “It’s just not one of my favourite tracks, but you have to ride and race where the series takes you and it’s the same for everyone. In the first race launched off the start gate well but got taken down in the first turn so I was already coming from the back and making things hard for myself. I then came off again on my way through the pack and was making good progress till we had a bike issue that made us pull out of the race. In the second I was coming through again and picking off some of the other riders as they became tired, but my pace wasn’t there today and that’s something I will have to work hard on for the future.”

Final championship positions in the pro-MX1’s are Jake sixth with Aaron seventeenth while in the pro-MX2’s Ben finished fourth and Tom one place behind him. 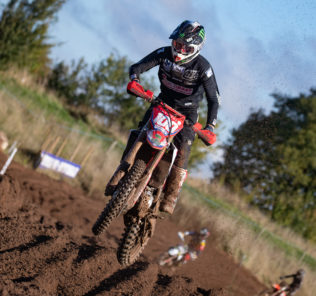 Great Gough of Scunthorpe! Dirt Diggers #3 – Report and Results
Next 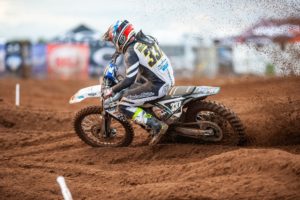