Round 2 of the Scottish Twinshock Motocross Championships took place at the picturesque track of Lochgilphead. After the rains of the previous few days the first few races would be a little slippery for some but it was definitely what the track needed as it improved into near perfect conditions.

A big thank you to Stewart Campbell and his team for the great preparation of this superb track. Moving onto the racing and it was Group 1 and race one of the Evo 125cc class, with some very exciting racing from William Penrice, Ewan Campbell and Peter ONeil. Indeed, it appeared that William enjoyed the mud of the first race and stormed into a very sizeable race lead, but race two and three were to be much closer fought affairs and these would indeed keep the crowd on their toes as there were some very spirited rides from Ewan and Peter. So, with three race wins it would be a well deserved first and second would be Ewan Campbell’s reward at his home track, with Peter o Neil completing the tiddler class podium.

The four stroke class had the very fast Sam Sibbald flying around the track and with the domination of races one and two, it looked as though this would be a Sam Sibbald benefit race, but cruel luck would strike as Sam was to record a DNF for race three and this would allow the win to be taken by Keith Stanford and mister consistency himself, Ricky Caldwell taking second place with a very well deserved third by John “Hoppy” Hoptoun.

The Youth class had Kieran Schofield Sives take three race wins and with the quickest lap times in his class he would end the day a thoroughly deserved youth class winner but never too far from Kieran would be James Forrest and Rory Oxland, the later taking second overall by virtue of his third race second place and pipping James Forrest, who would take the last step on the podium. It is so great to see the development of our youth riders and the ferocity of riding shown at each event.

The final bank of races in this group would be the pre-77 class, The first race win would be taken by Peter Maxwell but with another DNF and a no show for race three, this was not be his event. Taking full advantage of Peter’s misfortunes would be Grant Mcclure with race wins in race two and three. So, coming home in a superb second place overall would be John Fullerton, who would just pip Gary Britton by a few points. Leaving Gary to take third place honours.

Moving onto the group 2 of races and the open class twin-shock bikes. These large 500cc twin-shock machines are always a great spectacle to watch and with so many fast riders in this class it would be difficult to predict who would come out on top but at the end of the day it was to be two race wins and a third place for last years over 50 champion who would take the overall honours, followed closely by Gordon Morrison, Craig Smith and Paul Chiappa, with Craig taking the runner up spot by virtue of his consistent finishes and Gordon Morrison taking third overall after a superb last race win.

The Twinshock under 300cc class would be a trio of wins for Veteran rider Alex Joiner and some very close racing with Gordon Peterson who has recently moved into this class and would take the runner up spot as he gets to grips with his new red rocket missile. Following this pair all day would be Maico mounted man Richie Mcfadden as he took third place for a great day of racing as his just rewards.

Moving onto the over 50 class and this was certainly all about John Lamont and his flying honda,, taking three fast race wins, and followed by Robbie Allan in all these races on his Suzuki, but it was so great to see a different mixture of motocross bikes today and the RM of Robbie starting to get closer to John in the last race. Following these two would be a gaggle of riders in the shape of David Watson, Keith Birse, Derek Morris and Ian Clark but it would be the consistency of Keith that would take the third spot overall.

Group 3 would have the Evolution class, the 2 stroke class and the clubmen competing for individual honours in their respective classes. The evo class would be a three race victory for Paul Jonty Johnston with Tom Grant following him home in races one and two, and a third in the final encounter giving Tom the runner up spot and Roy Potts being consistent to finish the day on third overall with a good second place in the last race.

The 2 stroke class was a bit of a ding-dong battle between Lewis Farrow and Gregor Campbell with some very fast racing but with home court advantage going to Gregor then he would take the days honours in this class and Lewis would have to settle for second on this occasion, following the pair home would be Robert Bell and a third overall was to be his reward.

The Clubman class was a most enjoyable day of racing for Derrick Bellshaw as he flew onto three race wins with Peter Rennie, Adam Curran, and Kyle Mcclure all proving to be the rest of the contenders in the mix, the third  overall would go to Adam Curran (watching his championship position), he would keep the lead overall in the championship but now Derrick is closing in. Second overall on the day would be Peter Rennie, with some great racing and also there is  a notable mention to our former schoolboy racer Kyle Mcclure who would take a third in race two and almost third overall. Indeed, this is an interesting class with many riders capable of taking overall championship honours.

Onto the last batch of racing with Group 4 and the monoshock class with day members too and it was a great days racing for both Jamie Clark and Des Halewood both taking race wins but with Jamie taking 2 wins and Des only one, then top spot honours would go to Jamie as he is enjoying his racing more and more, with suspension improvements to his trusty steed, but to make sure that Jamie would not get too comfortable then Des took the last race win convincingly, in third would be a gutsy performance for, returning from injury, Shaun “Robbo” Robertson. With very notable mentions to our day members of Jordan Kerr and Danny Milne. 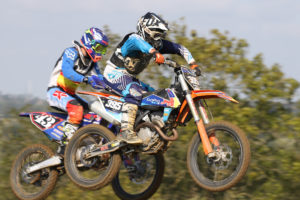 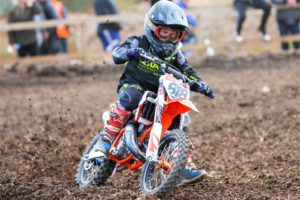