The final round of the ACU Pro Clean Sidecar British Championship at Canada Heights was cancelled this weekend due to heavy rain.

Despite hard word but the club to ensure the even went ahead the situation got worse with heavy downpours before practice.

The championship results before the event were used and the champions declared.

Stuart Brown and Josh Chamberlain were declared British Champions again, that seven times together and the sixteenth time for Stuart. And what a 2019 season for the pair as they won all but one of the races this season, and finish a great 46 points ahead.

Stuart’s son Jake Brown joined with Joe Millard this season. The pair quickly found their rhythm, proving to be a great pair.

George Kinge and Lewis Gray took a brilliant third place, after a consistent first season together.

Scott Grahame, the regular passenger with Michael Hodges has been out with a broken leg since a crash at the Latvian GP, but the team have fought on with the help of temporary replacements, and managed an amazing fourth place.

Chasing a top three position all season were Dan Foden and his Dutch passenger Roy Bijenhof and right handed bike, they were just two points behind Hodges in fifth.

Unfortunately the defending champion Brett Wilkinson, and passenger Ryan Humphrey only participated at two rounds, and the team are still out with injuries picked up at the GP in France a few weeks ago, this was following a bad crash at the start of the season where Brett needed a back operation. It’s been a tough season for the pair.

So now just the awards night and the parties before the hard work starts again ready for next season. 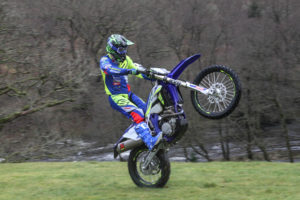