Four rounds of fierce competition reached its finale on the 8th September as the Rogershill Off-Road Events Enduro Summer Championships reached its conclusion. With more glorious weather a field of 130 riders lined up for the last time this summer under the wind turbine at Rogershill Raceway.

Daryl Bolter was in a league of his own, leading from the first lap and setting the fastest time of the race, more than 30 seconds quicker than anyone else. In his wake, the battle of the Brads, for the championship, was underway. Brad King was comfortably ahead of Brad Rowland when disaster struck his gear lever, meaning he finished back in 7th costing him over 15minutes and the championship. The consistent Brad Rowland cruised to 2nd, taking the championship win by one point. After a dodgy second lap, where I’m guessing he sampled some dirt, Josh Player pulled out some impressive times to finish 3rd. Bravery rider Jack Nixey was going well until his bike went pop (again)!

After a steady start Maverick Smith found his stride, setting the quickest lap of the class and securing his position at the top of the podium. Niles Reid took the early lead but had to settle for second in the end, securing second in the championship as well. Jordan Brigden was third on the day and over the summer series as well. Fourth place Ricky Good had done enough in the previous rounds to earn himself first in the expert championship!

With Stan Watt taking his chances in the championship class, the Expert Vets, was even more competitive than usual! Jack Twentyman got the holeshot but by the end of the first lap Gary McCoy was out front where he stayed till the chequered flag and won the championship by over 10 points. Dan slotted into second until the fuel stops but was struggling for traction as the tight git is still using a tyre he fitted for the sprint in June! Geoff Brigden battled it out with Jack and Dave Coles and came in second and second in the championship with Dave finishing third on the day.

Harry Neal was the winner of the clubman A class, coming an impressive 13th overall, he’s back on form after a bad crash at Dawn till Dusk! Second place was championship winner Daryl Biles who set the fastest lap time of the group. Third was Tony Cook and fourth was Dan Guy who got stuck behind the scrapping vets!

Clubman B saw a lot of changing places, but Adam Morgan finally pulled away from the others for the win after Rhys Trotter rode the tyres clean off his husky and pulled out! The consistent Nick Gifford was second, having completed 9 laps in a row under 20 minutes! Em was third and gutted to just miss out on getting 10laps thanks to a nasty first lap crash. Adam also won the class for the series, well done. Adam Murphy made the long trip over from Ireland after hearing how good our series was! Get well soon to Cavan Watt, who began the race with a broken shoulder, as Stan said he was fine! Another crash meant he finally went to A&E, on his birthday! All the best mate.
In the over 40 clubman class Phillip Gilder took a comfortable win from Stuart (stumpy) Jarvis and Wayne Tipton who battled it out for most of the race with Mike Rogers never far away. Spare a thought for Mark Davis who’s KTM started making nasty noises forcing him out. The championship winner was Julian Earle, who must have had a nightmare of a day by the looks of things!

Alex Westlake ran away with the sportsman class finishing a lap up on everyone else and winning every race this championship. Joseph Williams also put in some impressive lap times and was comfortably ahead of Rory Tucker in third. Rory also finished third in championship.

John Rowley won the sportsman Vets class and was the only one with a lap time under 20 minutes! Second was Alan Obrien who also completed 9 laps. Third was Jeff White who earned enough points to top the series! Second in the Series was Bravery rider Chris Dello, training with Danny paid off!

We hope you have all enjoyed the series, we have tried to vary the events as much as possible and the feedback from the sprint/beers in the barn memorial fundraiser was excellent and we aim to build on that one for next year! Thanks to all for your support, RORE have been able to raise over £9000 for charity in the last year! This has only been possible thanks to everyone who has helped us out from marking out tracks and marshalling to preparing party barns and dealing with the reams of paperwork that go with each event, thankyou all!

The winter series is approaching quickly but on the 19th October, we will host an enduro practice which will include the presentation of prizes and plaques for the championship top three in each class. Product prizes kindly sponsored by Rapid Moto and Bravery.org. The winter series begins on the 3rd November with the help of Dorset Enduro there will be 5 rounds of racing at 3 different venues! 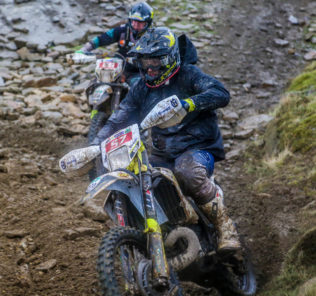 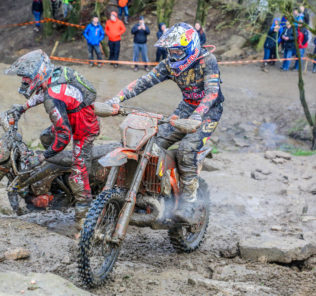 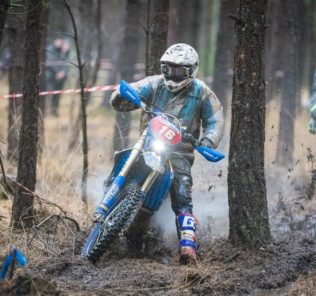 Josh Gotts it going in Hampshire! British Enduro Championship Round one – Report and Results
Read More 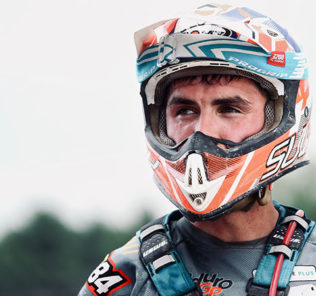 Shaun Simpson to form own KTM MXGP effort for 2020!