However, it wasn’t plain sailing for the young Brit, and the first race of the evening certainly didn’t go to plan as several mistakes, including a huge over-the-bars crash, saw him fail to keep pace with the quick KTM pairing of BLAZUSIAK (POL-KTM) and WALKER. In fact, WALKER impressively dominated the race with his smooth and precise style, gapping the field and leaving BLAZUSIAK to settle for second. Remarkably, BOLT held on to third despite the difficulties, taking important points.

As Race 2 rolled around, BOLT wasn’t going to take any chances. Even after a less than perfect start due to the ‘reverse grid’ format, BOLT was at the front in a flash. Taddy BLAZUSIAK also suffered a bad start, but as the Pole was also struggling with the bike set-up he found it difficult to make up positions, although a late charge saw him take a hard fought 3rd. BOLT, edging ever further in front of his rivals, won the second race of the night ahead of WALKER, BLAZUSIAK and Pol TARRES (ESP-Husqvarna), who took a great fourth.

In the final race of the night Jonny WALKER once again took to the front with his pacy but precise style, but this time he could not hold off BOLT. The #22 KTM rider made a small mistake in the melee and while he was also suffering with arm pump he found it hard to fight back. BLAZUSIAK was looking keen and found himself in the lead for the first time of the evening, but BOLT was neck-and-neck with the SuperEnduro ‘GOAT’. Under pressure from the wild Brit, Taddy made a mistake that allowed the Factory Husqvarna rider to take the lead. BLAZUSIAK was also passed by his team-mate, WALKER, proving that KTM aren’t employing team orders. Alfredo GOMEZ (ESP-Husqvarna) also snuck through to 3rd as Taddy suffered from his set-up choices again.

With 227 points already clocked up BOLT leaves Hungary 16 points ahead of BLAZUSIAK. After his excellent performance WALKER has caught up a bit, but he remains 35 points from his compatriot. The final round of the season in Lodz (Poland) will be fiery between these three superb riders.

Junior Class: The Kids Put On A Show. ​

The Junior category was one of the most lively of the night. The riders completed three fantastic races in front of a very enthusiastic Hungarian crowd. Teodor KABAKCHIEV (BGR-KTM) was the big winner in Budapest, the title hopeful took advantage of the excellent support from a large number of Bulgarian fans to win the night ahead of a keen Leon HENTSCHEL (GER-KTM) and Dominik OLSZOWY (POL-KTM), who appears to be coming back well. The three young men fought a fantastic battle during the three races, with KABAKCHIEV and HENTSCHEL exchanging the top spot several times in the last heat of the night. Ty CULLINS (USA-TM) failed to repeat the superb performance he had at Round 1 in Poland, suffering in each race in Hungary. The American seemed to be paying for a lack of experience in the discipline, but also the fatigue of his frequent trips to and from America. The Junior category will certainly be exciting in the final round as KABAKCHIEV holds just 2 points over HENTSCHEL, CULLINS is 3rd, 20 points from the leader.

European Class: Thor Puts the Hammer Down in Hungary​

Magnus THOR (SWE-Husqvarna) tonight became the first Swede to win the European SuperEnduro Cup. He had plenty of pressure coming into the evening, having failed to shine at the previous European round in Germany. He had to fight off an ever-attacking Sonny GOGGIA (ITA-BETA), and the pair were level on points coming into their final race of the night. But despite taking overall victory at the Hungarian GP, the disappointed GOGGIA had to settle for 2nd in the Championship. Pascal SPRINGMANN (GER-Beta) rounded out the Top 3 on the night. Also worth noting was the great home performance of Norbert ZSIGOVITS (HUN – KTM), the Hungarian to a win in Race 1 to the rapture of the fans.

The riders of the FIM SuperEnduro World Championship will now take a month and a half to rest before coming together for the grand finale in Lodz, Poland. We predict a riot on March 14th!

Billy BOLT: “I am very satisfied with my evening here in Budapest. I made a lot of mistakes in the first race, so I changed my approach for thee following races. The team coached me well, telling me to calm down and relax more. Arriving in Poland with a 16 point lead seems like a lot but it’s far from enough, the championship is never over until it’s over and SuperEnduro is unpredictable, there is still so much that can happen.”

Jonny WALKER: “It felt good to take my first race win of the year, I knew that I had a good chance here because I felt comfortable with the track and the bike. I still made some mistakes in some races, but I feel much better in general. The next step for me is to win a race overall!”

Taddy BLAZUSIAK: “It was a difficult evening, but I must admit that I chose the wrong settings for my bike, I thought that the track would evolve completely differently. I found myself in trouble all evening. However, I did what I could, and I can’t wait to race in Poland in front of my home fans, I’ll give it everything until the last moto!” 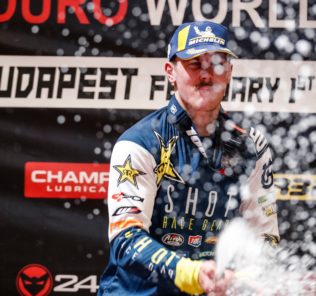 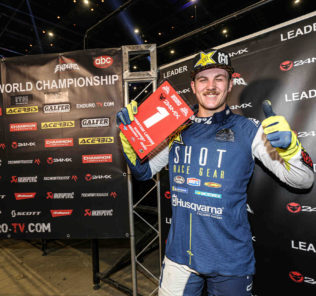 Bolt and Walker on the box in Germany! SuperEnduro Round 2 – Race Report and Results

HSU can stop him! 2020 Arenacross Tour Round 4 – Report and Results
Latest Articles